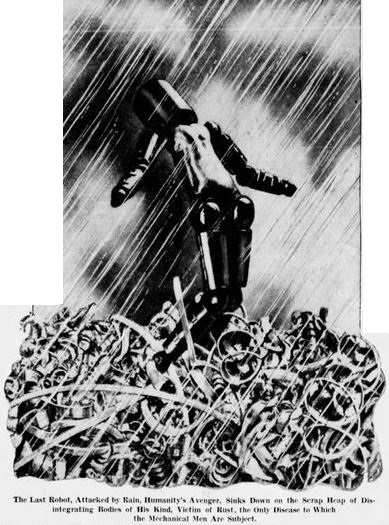 “Creaking painfully, its joints rusty, the last robot to survive the civilization which man is making to replace the dwindling crop of babies, would crawl along to a heap of scrap-iron, the cemetery for defunct robots.

“Rain, ceaseless torrents of rain, would bring the germs of the only disease which could possibly affect a mechanical man: Rust.”

Rust: the kryptonite of metal men. Two years later, Joseph E. Kelleam would have a story in the October 1939 issue of Astounding Science-Fiction called “Rust.” In it, the three remaining battle robots creak to the death not only of themselves but of all robotdom because the war-blind humans made them able to kill but not to create.

The fable I’m discussing here is just as bleak and far older. The quotes come from “a long-forgotten book on a robot civilization which has recently been resurrected,” written by “the distinguished German scientist of a generation ago, Professor von Schimdt.” The book “has assumed entirely new importance with the men who make war a business. In the past twenty years a deadly fighting machine has been constructed and perfected which may lead to the destruction of the human race.”

What that “deadly fighting machine” might be remains as mysterious as the name of the book or the first name of Professor von Schmidt, on whom I can find no information. All I know was that this article appeared without a byline in a Sunday American Weekly newspaper supplement on October 17, 1937, taken from a German source. (If that sounds familiar, that’s because I wrote about a very similar article under the name of We Buy Us a Robot last September. Maybe another helpful reader can spot the German original of this.)

The Professor forecasts a world of robot workers, “strange creatures with multiple arms and legs, glaring headlights for eyes and queer antennae-like projections for hands.” They’ll communicate not with words but with radio code flashes sent via short-wave. Robots will otherwise be specialized to do one job, but do it perfectly. 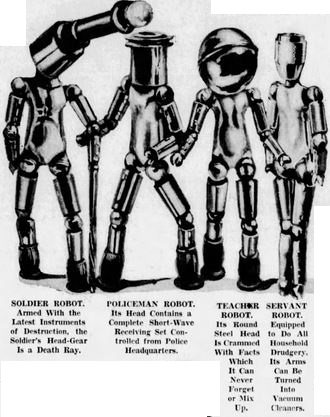 Simple “worker-robots” would comprise, as in human society, the lowest class. “They will do the simple jobs like pushing a button or running an elevator.” Few futuristic predictions show the failings of straight-line extrapolations more than this one. Over and over, dozens of writers  prophesied that the frail flesh-and blood protoplasm of humans could easily and properly be replaced by robots, machines of metallic strength and endurance. Few, even after the appearance of electricity, considered that buttons might be obsoleted by automatic mechanisms working at a distance or that elevators could work by themselves with the user rather than an operator guiding the mechanism from floor to floor. This is the main reason why past futures seem quaint and foolish to modern eyes. Technology increments, true: but it also leaps. 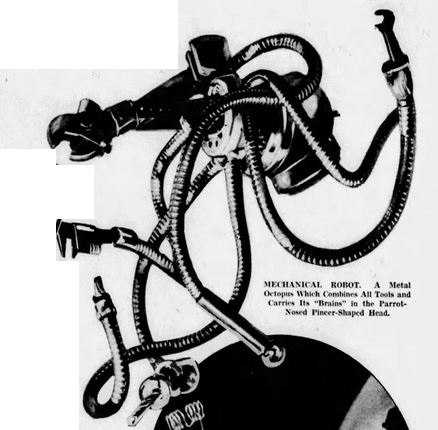 In addition to low-level workers, specialist “master robots” would be the “chemists and engineers of the new world,” able to do higher-level work. Those might have a variety of tools and grips for their tasks. Workers need guidance, and the equivalent of a foreman was the “secretary-robot” that give the orders. Above them is the “robot-de-luxe.”

Those would examine the ups and downs of the production patterns. If steel supplies grew low, the robot-de-luxe would tell the secretary robots to instruct their workers to dig more ore and gather in coal and get the steel mills rolling.

This future is a technological utopia. “There would be no dissatisfaction in a world with everyone conditioned for his proper job and built physically to do it as it could be done.” This sounds dull, so an artist was recruited to remedy that. 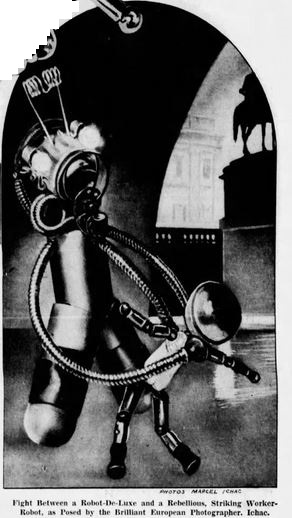 (The “photographer” is probably Marcel Ichac, but how that image is a photograph is beyond me.)

Somebody – or something – has to supply and gather the information needed to run the economy. That would be the task of “mechanical ‘brains’.” Vannevar Bush of MIT had earlier in the 1930s invented an analog computer that could speed up mathematical calculations. The American Weekly writer clearly used that as “proof” that these fantastic inventions weren’t as far off as the reader might think, but we now know that his calculators in no way resembled a modern computer.

The highest level of robot does began to sound like a modern system, though.

Over the class system and ruling it with an iron hand would be the “dictator-robot.” This might look like a huge central telephone exchange with wires running out to every part of the land. It would connect with all the robots-de-luxe and mechanical brains, and would be the central distributing point for the nation’s orders. Its mechanisms would run on the principles of the photo-electric cell and sound vibration.

Perhaps nothing explains the 1930s better than this passage and its blithe assumption that an all-knowing, all-powerful “dictator” could be the logical end of progress and civilization.

From here the article flies off into weird speculation, most of it so contemporary to 1937 that it seems unlikely that von Schmidt had anything to say about it. What can one make of this passage, as wild as anything in an Astounding story?

It is not hard to imagine creatures designed to receive their energy from the rays of a star. In many military encampments today guns are set off on the hour by the rays of the sun. Thus it would be that robots would work, act and live as long as their star would, perhaps billions of years. Each robot or group of robots might be controlled by an individual star, the various degrees of light energy received from each star giving the robots their individual wave-length of energy.

The world described is essentially a giant train set, designed mainly to move the human passengers around during their empty days of doing nothing. The article suddenly takes a leap and imagines the robots thinking, and worse, feeling.

Once the robot civilization got under way there would be no place for the human race in it. They would be “inferior savages” to the robot’s way of thinking. “Imagine anyone susceptible to disease,” the robots would say, and promptly exile their human creators to reservations and escape-proof islands. 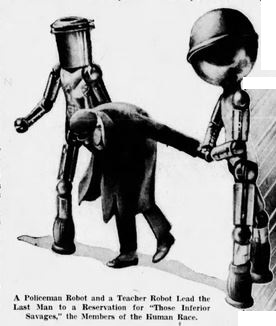 Wasn’t the entire train set built for the comfort of humans? Methinks the writer read one too many science fiction story.

But humans would get their revenge. “When the secret of making robots died with the last man, the mechanical creatures would be unable to perpetuate their own kind. … The last rusty robot would fall amongst his rusting brothers.” Hard to believe that Joesph Kelleam didn’t read this article before writing his story. Despite the genre’s unshakable reputation for being the literature of ideas, my reading of history tells me that sf writers seldom came up with any ideas that hadn’t been in the news earlier. On the other hand, the stories are remembered today, while the newspaper articles are fodder merely for historians. I’m not sure which side to take on that.

Steve Carper writes for The Digest Enthusiast; his story “Pity the Poor Dybbuk” appeared in Black Gate 2. His website is flyingcarsandfoodpills.com. His last article for us was Man of Steel vs. Man of Metal. His epic history of robots, Robots in American Popular Culture, is inching closer to its Summer release.