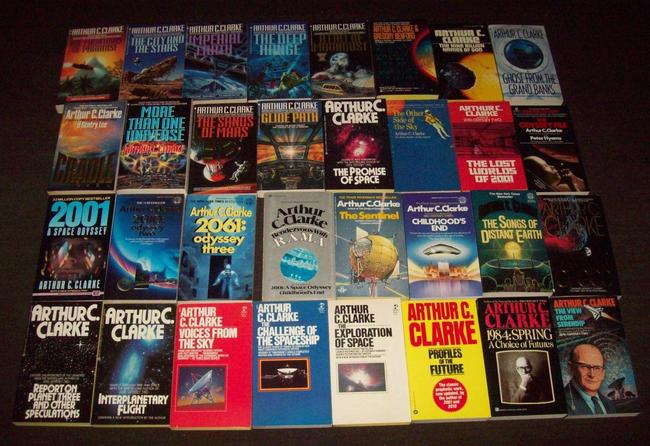 A couple weeks ago I reported here on a pristine collection of 35 Isaac Asimov books I purchased on eBay. Coincidentally, I also happened to stumble across blogger Mark R. Kelly’s Asimov Re-read. I found many of his comments right on the money, and Mark’s insights became the core of my article.

Eclipsed by all that discussion was the fact that the same day I also purchased a lot of virtually new paperbacks by Arthur C. Clarke (above). Although it was roughly the same size (32 titles) and same vintage (30+ years), and the books were in similar gorgeous shape, I expected to pay much less for them. And that’s exactly what happened: I took the lot home with a single bid for $27, less than a third of what I paid for the Asimov collection. 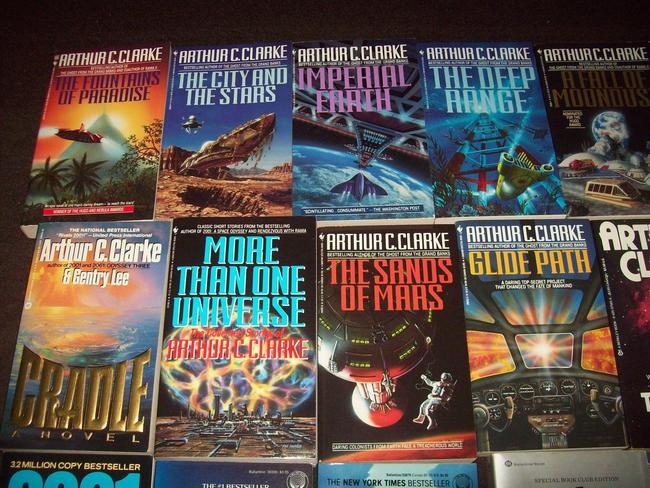 I think “eclipsed” is probably the right word to describe Asimov’s effect on Clarke, at least among modern readers and collectors. Both are remembered and in print today, but it seems to me Asimov has eclipsed Clarke. I was delighted to win the Asimov auction, and merely content to win the Clarke. I read both Asimov and Clarke in my youth, yet Asimov’s books have enormous emotional appeal for me, in a way that Clarke’s don’t.

Which is ironic, because these days I find Clarke the better writer (by a significant margin) and, as an adult, I find Clarke’s novels much more interesting. But that’s not quite the same thing as nostalgic love. And when it comes to keeping books in print — and keeping a writer’s reputation alive — I think nostalgia wins out over writing ability every time. 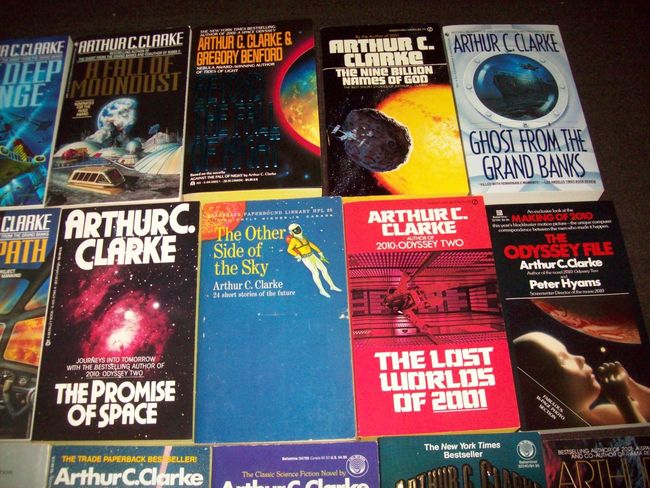 Together with Robert A. Heinlein, Asimov and Clarke formed “The Big Three,” the best-selling triad of science fiction writers in the 70s and 80s, and the first SF writers to achieve best-selling status. While Arthur C. Clarke didn’t approach Asimov’s near-legendary productivity, he was a very prolific writer, producing over 30 novels and 16 short story collections. His most famous novels include Childhood’s End (1953), The City and the Stars (1956), Imperial Earth (1975), The Songs of Distant Earth (1986) and The Ghost from the Grand Banks (1990). He won both the Hugo Award and Nebula award for Rendezvous with Rama (1972) and again for The Fountains of Paradise (1979).

But of course his greatest claim to fame was as the screenwriter for Stanley Kubrick’s 2001: A Space Odyssey, one of the most successful science fiction films of the 20th Century. The film was inspired by his superb short story “The Sentinel,” and he published a very successful novelization in 1968, which presumably filmgoers ran out to buy so they could understand the damn movie.

In fact, as I was sorting through the collection after it arrived, I was struck by just how many books Clarke produced to cash in on 2001: the non-fiction books The Lost World of 2001 and The Odyssey File, and no less than three sequels: 2010: Odyssey Two, 2061: Odyssey Three, and 3001: The Final Odyssey. (Since the first novelization of 2001 sold over 3.2 million copies, you can hardly blame him.) 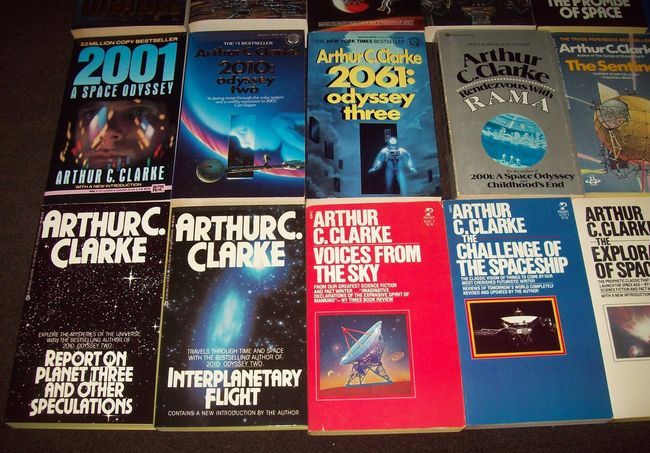 In addition to his fiction Clarke produced copious amounts of non-fiction, chiefly science articles (you can see an assortment in the pic above). Like Asimov, these were often collected in slender paperbacks that (presumably) sold decently, as I ended up with a boatload of them. Like mass market collections, paperback books that reprint science columns are a dead market today.

They don’t date very well, either. I dipped into Clarke’s fiction as I put them away, enjoying several of his stories. I couldn’t really get into his non-fiction, however. I ended up putting that in the attic. Sorry, Arthur. 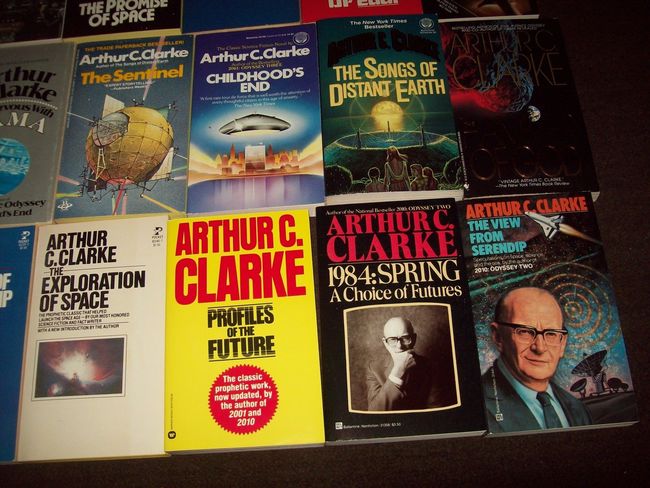 Clarke’s fiction still makes excellent reading today, even if he doesn’t have quite the fandom Asimov does. His classic novel of alien invasion Childhood’s End has been adapted by the Syfy channel and is being broadcast in a special three-night event December 14-16. With luck, it will ignite more interest in his other novels.

If you enjoy looking at pics of vintage paperbacks (and who doesn’t?), our other articles on SF & fantasy series and collecting may interest you:

While I like many of his novels, it’s his short fiction I most enjoy. The doorstop-thick Complete Stories volume is worth every penny and has held up through two complete readings.

I think Clarke, like many of even the biggest names of his generation, is slowly falling out of the consciousness of SF readers. For me, he was the best balanced of the giants of 20th century science fiction, more realistic and factual than Bradbury, more lyrical and poetic than Asimov, and less dogmatic and more humane than Heinlein.

Ever read “The Lion of Comarre”? I have that book. It’s his first novel and in a way foreshadows some of his later works, most notably “The City and the Stars/Against the Fall of Night” work.

>>. And when it comes to keeping books in print — and keeping a writer’s reputation alive — I think nostalgia wins out over writing ability every time.<<

But anyway, I always enjoyed Clarke more than Asimov. Dunno why but I never could get into Asimov.

I think Clarke will fade away in a few decades. Sure people really into SF will dig him up, but the more casual folks? They will only know him for the movie, or maybe the trivia about geosynch sats.

I mean if you go to websites and people ask for recommended reading, how often is Clarke in the top 10? or even mentioned?

> The doorstop-thick Complete Stories volume is worth every penny and has held up through two complete readings.

Agreed! That was the book that I most wanted in this collection — and I wasn’t disappointed.

> I think Clarke, like many of even the biggest names of his generation, is slowly falling out of the consciousness of SF readers.

I suspect you’re right. Given the devoted worship of Heinlein, I thought it would be a long time before he faded from bookshelves… but even he is slowly vanishing.

> Ever read “The Lion of Comarre”?

I have not… but I’m looking forward to it!

> I think Clarke will fade away in a few decades. Sure people really into SF will dig him up, but the more casual folks?
> They will only know him for the movie, or maybe the trivia about geosynch sats.
> I mean if you go to websites and people ask for recommended reading, how often is Clarke in the top 10? or even mentioned?

But a few of his works have survived as “classics,” and science fiction gives very great weight to its canonical classics. I’m curious to see what the adaptation of Childhood’s End will do for that book, for example.

I rad A Fall of Moondust just last year. The scientific premise – that the surface of the moon is covered with dust so fine and deep that it has the qualities of a liquid, and that a vehicle could sink into it and become trapped – was totally fallacious, as our later discoveries about our satellite made clear. And it didn’t matter in the least. The story of the disaster (due to a moonquake, a moonbus full of passengers becomes trapped – and the clock is ticking!) and rescue was absolutely gripping, rather in the mode of Apollo 13; Clarke’s love of process and his respect for facts made the best of his work edge-of-your-seat stuff, even when the facts turned out to be rather different than he supposed.

> I did read all four of the 2001 novels, which I found interesting.

Glad to hear that! I haven’t read the 2001 books (it always seemed to make sense to wait for the movies), but I’m intrigued to hear they’re worth the read. I very much enjoyed the movie version of 2010, for what that’s worth.

> I rad A Fall of Moondust just last year.

Ah! So there are still people reading Clarke! 🙂

A Fall of Moondust was one of the two novels that most intrigued me i when the collection arrived (the other was Imperial Earth.) Thanks for the great mini-review!