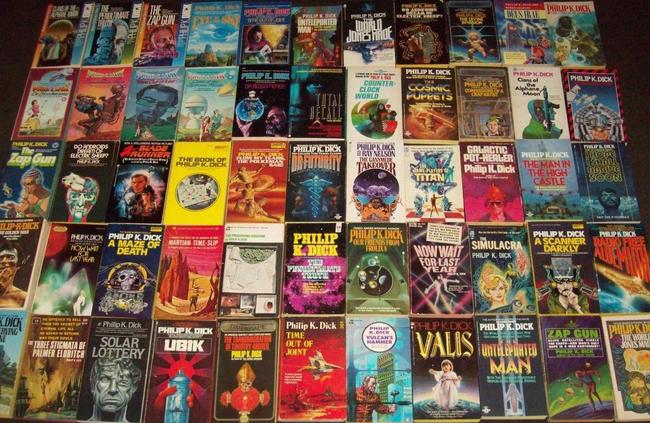 Recently I wrote here about a handsome collection of 35 books by Isaac Asimov I bought on eBay for $82.17 — a lofty price for vintage paperbacks, but I wasn’t the only one who noticed what great shape they were in. Last week I also reported on the set of 32 paperback of the same vintage by Arthur C. Clarke I purchased at the same time. Clarke is still highly regarded these days, but not in the same category as Asimov. I expected to pay much less for them, and I was right — I won the auction for $27.

The same seller was also offering the striking set of Philp K. Dick books above (click for bigger version). While not virtually brand new like the Clarke and Asimov collections, they were nonetheless in terrific shape, especially for 40-year old paperbacks. I bravely took part in the auction, but bowed out before it hit $100. I expected it to go a lot higher, and it did.

The set sold for $536 and change, about $9.50 per book — a bargain, considering what Dick paperbacks in that kind of condition sell for individually. 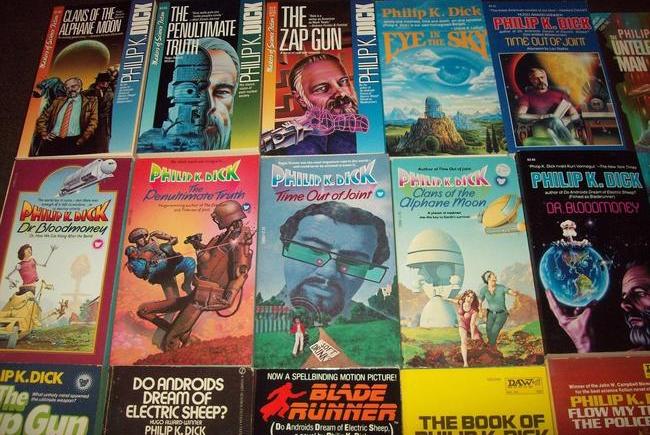 I have a lot of experience selling vintage paperbacks at conventions and other places, and nobody — but nobody — has skyrocketed in value like Philip K. Dick. The only authors who even come close are George R.R. Martin, James Tiptree, Jr, Robert E. Howard, and maybe Samuel R. Delany.

A big part of the reason, of course, is that virtually all of Dick’s novels were originally published in paperback, which means that — nearly unique among highly collectible authors — the coveted first editions of his novels are all paperbacks. 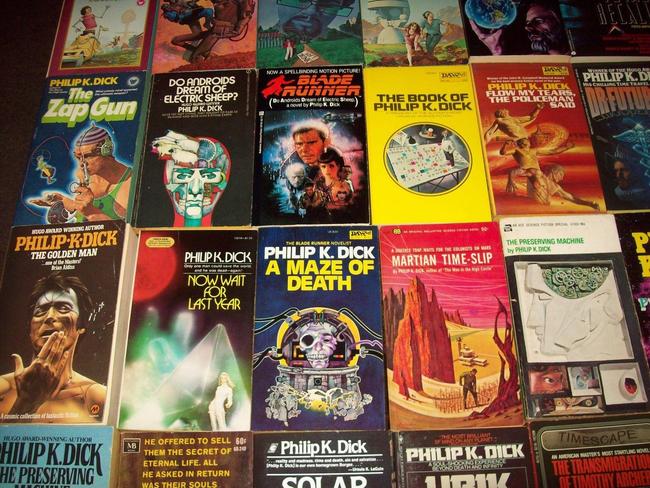 Today the Philip K. Dick Award is given annually for distinguished science fiction published as a paperback original in the United States, in honor of Dick.

I have a lot of great stories about selling Philip K. Dick books. Years ago I attended Chicago’s Printer’s Row in downtown Chicago, where I set up a huge table selling Black Gate magazine. At the last minute I decided to bring some vintage paperbacks as well. I had a pile of duplicate copies of Phil Dick paperbacks, unpriced, and it was much too late to research prices. 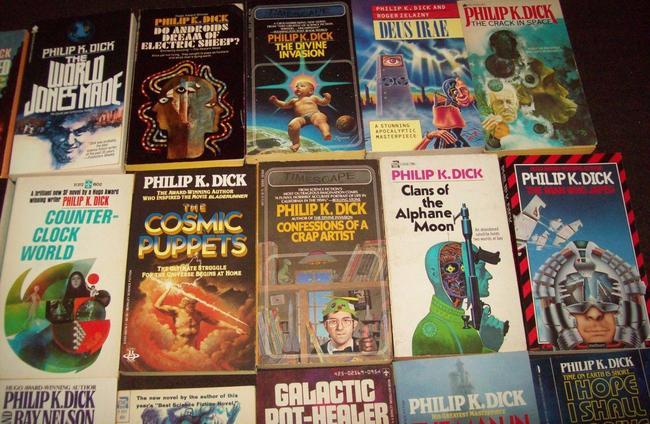 In the past, I’d sold Dick paperbacks at conventions for anything from $5 – $35. So I grabbed a pen and hastily priced the entire stack at $35 each, and figured I’d let the market sort it out.

I sold every one in two days.  If I’d had a few more stacks, I could have retired. 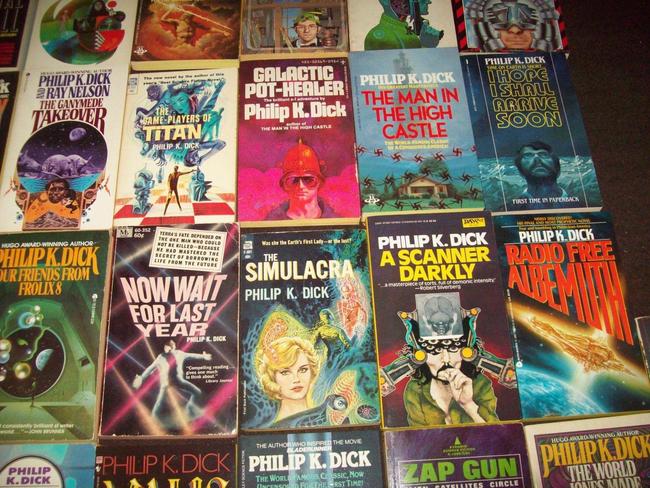 That was an unusual case — a crowded market with a lot of motivated and uneducated buyers. It probably could never have happened at an SF convention, where collectors are much more aware of the market. But it taught me a lot about just how much awareness of Dick has seeped well beyond our small industry, and how he’s viewed by readers and book collectors at large.

The primary reason, of course, is that Dick has experienced an ongoing renaissance for the past 30 years, particularly in Hollywood. It started with Ridley Scott’s seminal Blade Runner, the film that made the world first sit up and take notice of Dick. 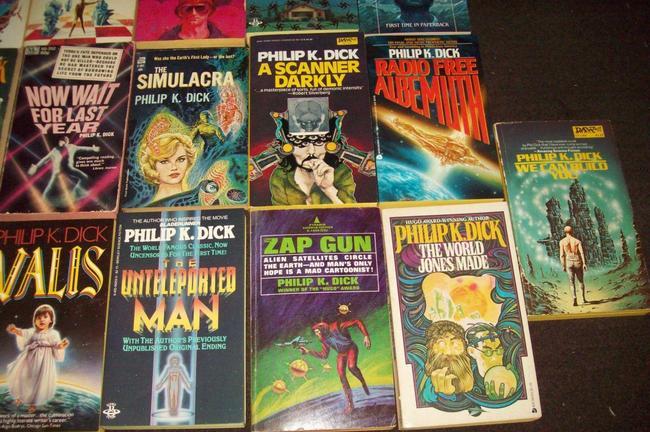 Blade Runner, based on his novel Do Androids Dream of Electric Sheep?, was released in 1982, shortly after Dick’s death. Dick never saw the completed film, although he saw several of the effects sequences and was reportedly very impressed — enough to say that his “life and creative work are justified and completed by Blade Runner.” 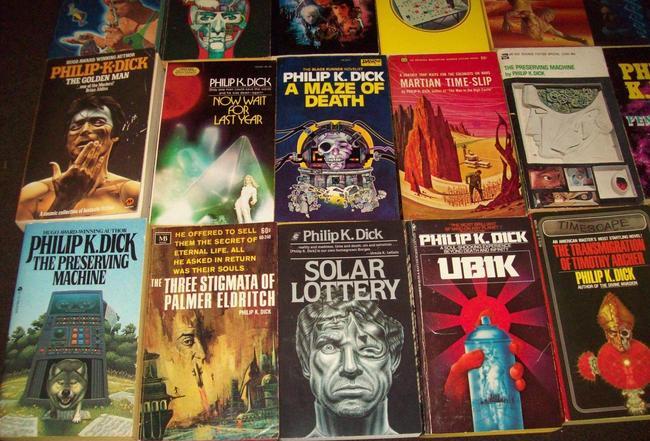 Most writers can only dream of being re-discovered and appreciated by the public on the scale of Philip K. Dick. Today he is a household name, on the scale of Asimov and Clarke at their peak. In all likelihood his books will continue to appreciate in value, so there’s an aura of speculation around collecting Dick — which only tends to drive up his value.

That’s not the only Philip K. Dick bookselling anecdote I have. I’ve told this second tale several times, but it seems appropriate to share it again here. 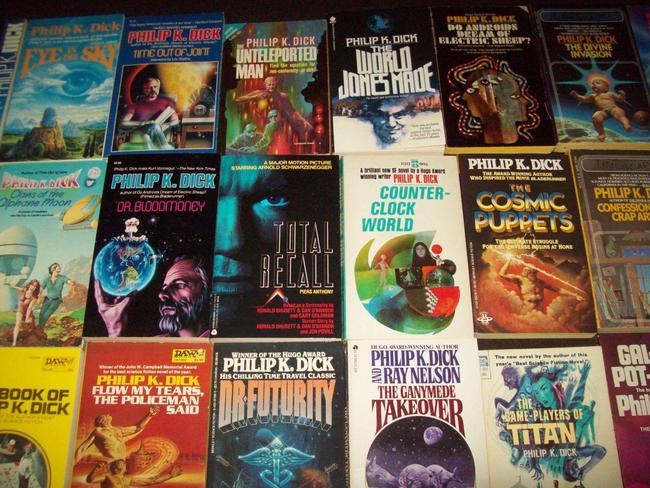 In 2010 the Black Gate team ventured to Dragon*con, our first and only trip to that genre mecca. I purchased several tables in the Dealer’s room (which cost $2,500), and we set up our wares — including over a thousand vintage paperbacks.

A young lady entered our booth and picked up a copy of Dick’s The Game Players of Titan. Without thinking (clearly), I said, “Hi there! Do you like Dick?” 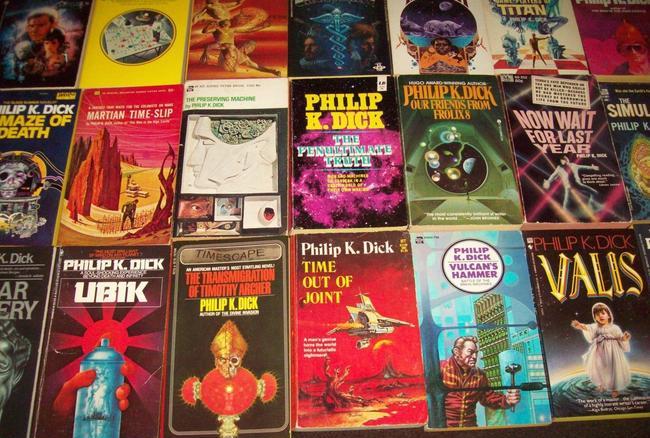 Well, she dropped the book, gave me a horrified look, and ran into the crowd. I never saw her again.

I couldn’t understand her reaction — until every one of my co-workers in the booth simultaneously broke into hysterical laughter. For years afterwards, during slow moments in the Black Gate booth, someone in the staff would say, in their best imitation-O’Neill voice, “Hi there! Do you like Dick?” 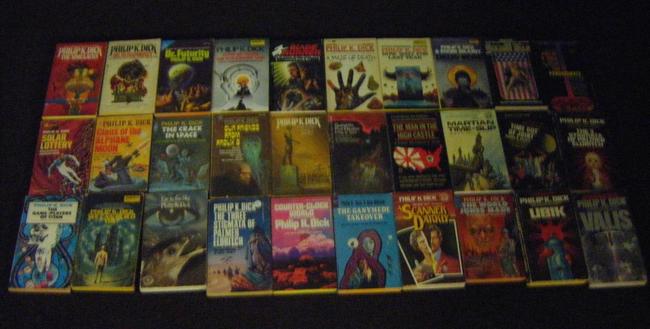 Dick’s enduring popularity is not solely based on his films, of course. Dick was an innovative and surprisingly versatile writer, whose work seems to grow more relevant with every year that goes by.

He was also very prolific, with some 44 novels and 121 short stories to his credit. There were seemingly numerous editions of his most popular novels over the decades, which makes collecting Dick a challenging and rewarding endeavor. Especially if, like me, you enjoy tracking down different editions of some of your favorite books. 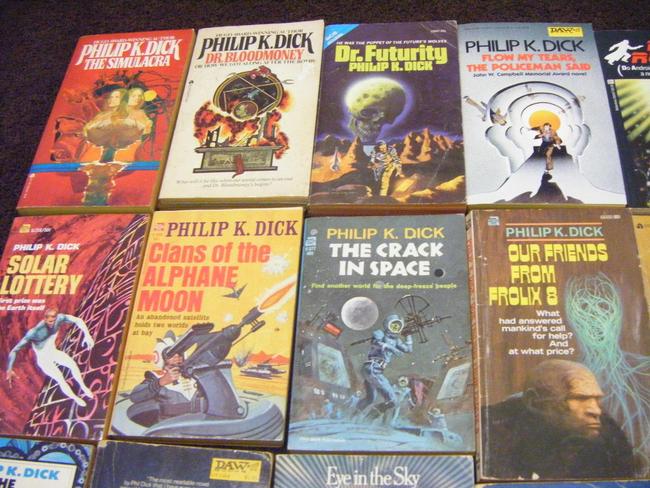 Dick shows no sign of vanishing from public consciousness. The Amazon series adapting his most famous and acclaimed novel, the Hugo Award winning The Man in the High Castle, is now available, and the reviews I’ve seen have been very positive. 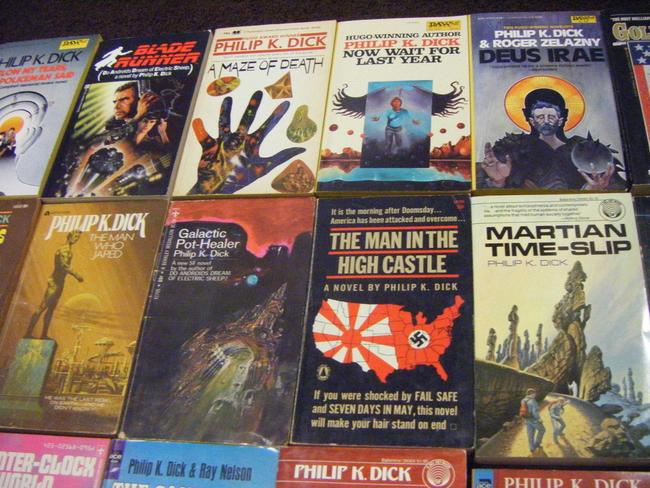 The pictures that accompany this article are taken from just two collections and — while they cover a great many of his most popular titles — they by no means represent everything he has to offer collectors. But if you’re looking for a place to start collecting Dick, these books are an excellent place to start. 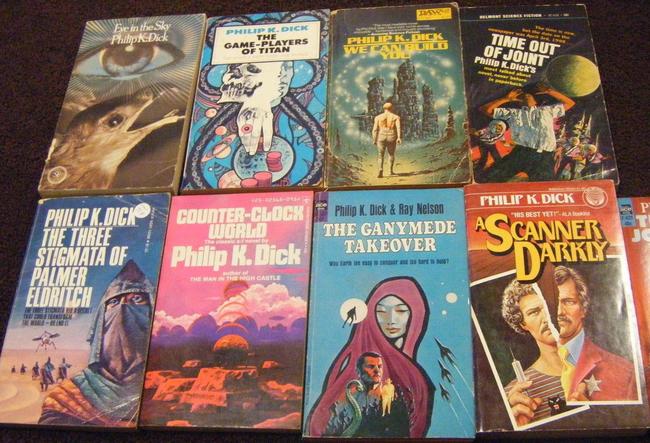 If you enjoy looking at pics of vintage paperbacks (and who doesn’t?), our other articles on SF & fantasy series and collecting may interest you:

Wow, that’s a whole lot of Dick you got there John! Never thought I’d see that much Dick in one place, especially on Black Gate! 🙂

I think I mentioned on here before my complete collections of F&SF, Asimov’s, Analog (since its name change only), and Galaxy (and a lot of other smaller run magazines, including Black Gate 😉 ), a lot of them which I acquired through eBay. The priciest were definitely the ones with stories by Dick, even more than ones with early Stephen King or Dean Koontz.

The semi-annual Philip K. Dick Conference will betaking place in Orange County, California in the spring of next year and I’m already making my plans to attend. I’ll give you one guess what attendees are called…

Excellent article John, I loved the anecdote. One of his stories I enjoyed due to its relevance to the country I live in was “The Man Who Japed”. Also gave me that kind of Brazil surreal future view.

> Wow, that’s a whole lot of Dick you got there John!

> The priciest were definitely the ones with stories by Dick, even more than ones with early Stephen King or Dean Koontz.

I find that interesting. Dick’s short stories are fairly well collected, so they’re (generally) not hard to find, and there isn’t usually much demand for the “first edition” of a short story, the same way there is for a book.

This phenomenon isn’t unique to Dick (there are a few magazines that are more valuable because of Heinlein stories, or early Stephen King), but it’s rare. Dick may be virtually the ONLY writer to command a premium for short stories from mid-century SF digests.

> I’ll give you one guess what attendees are called…

> One of his stories I enjoyed due to its relevance to the country I live in was “The Man Who Japed”.
> Also gave me that kind of Brazil surreal future view.

Glad you enjoyed it! It’s not one of his most acclaimed novels (I think Anthony Boucher called it “hasty and disappointing” — ‘hastily written’ was a critique often leveled against Dick), but I’ve always had a fondness for it, because it was one of the first Ace Doubles I ever bought. 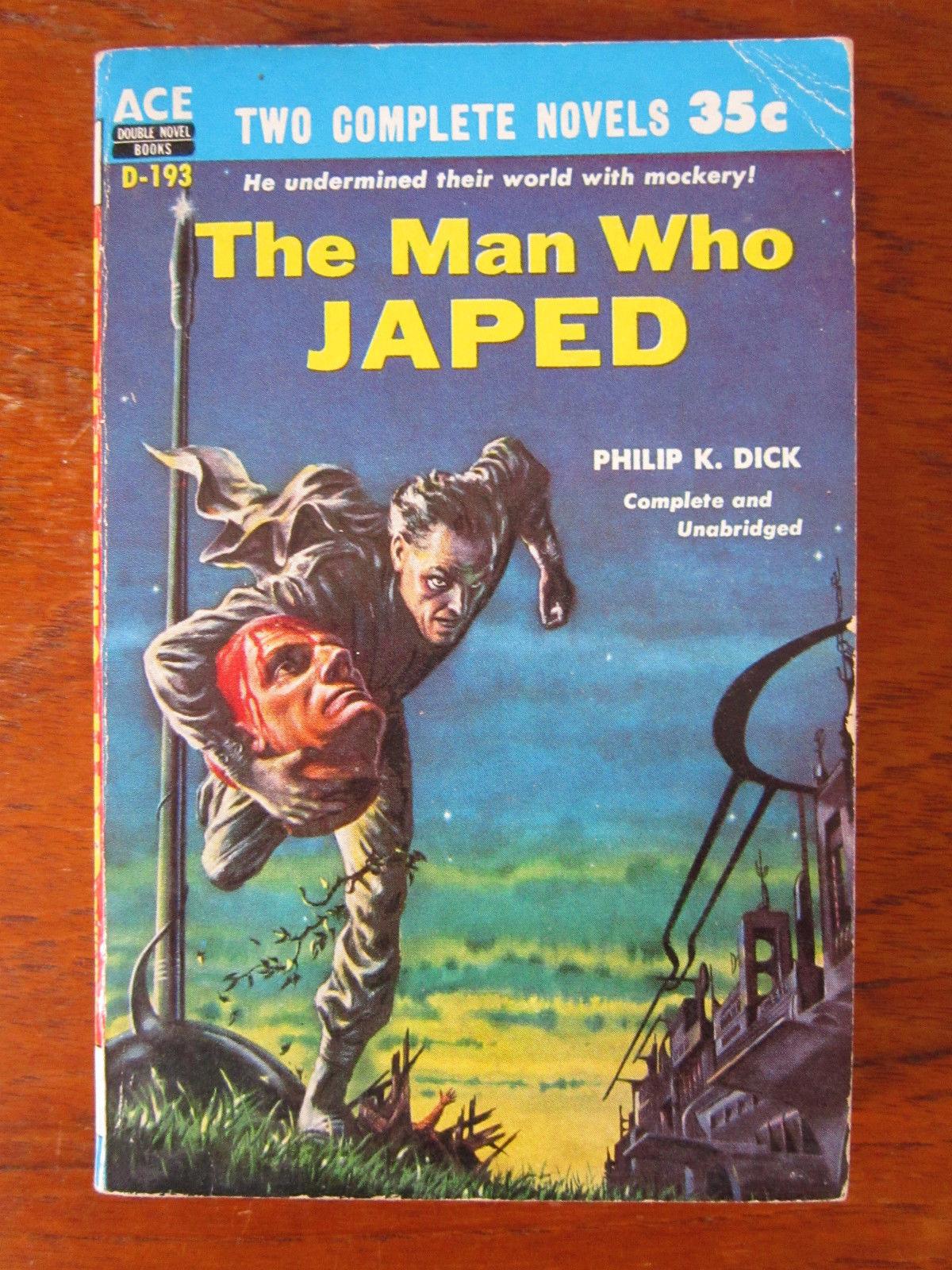