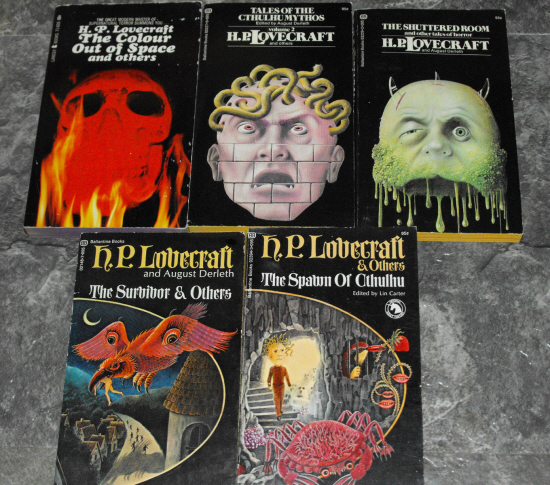 It’s almost too easy to get the complete works of H.P Lovecraft. Barnes and Noble, just for example, sells a handsome single-volume complete edition of his work (all 1112 pages!) for just $18. So why on earth would you ever want to spend your time and money collecting vintage paperbacks containing only a fraction of his complete works?

I made a half-hearted attempt to answer that question in the first article of this series, Collecting Lovecraft. Collecting is an emotional hobby, not a rational one, so trying to fathom the collecting urge purely on a rational basis is only going to get you so far. In truth, it usually boils down to something as simple as fondness for cover art, or nostalgia for the particular edition that first introduced you to an author.

Above you can see a colorful assortment of Lancer and Ballantine paperback editions of H.P. Lovecraft originally published between 1967 and 1973: The Colour Out of Space (1967), Tales of the Cthulhu Mythos, Volume 2, edited by August Derleth (1969), The Shuttered Room and Other Tales of Horror, by Lovecraft and Derleth (1973), The Survivor and Others by Lovecraft and Derleth (1971), and The Spawn of Cthulhu, edited by Lin Carter (1971). Truthfully, I’m not too fond of these covers, and they don’t hold any particular nostalgia for me — they were all out of print long before I discovered Lovecraft. So why was I so determined to buy them?

Back in August the New York Times published a fascinating article about Zero Freitas, the Brazilian millionaire collecting every vinyl record ever made. I don’t mean one copy of every record, I mean every single piece of vinyl with music on it in the world. He’s amassed millions so far. I distinctly remember the first time I read the piece, I nodded along and thought, “Yeah, I get it.” 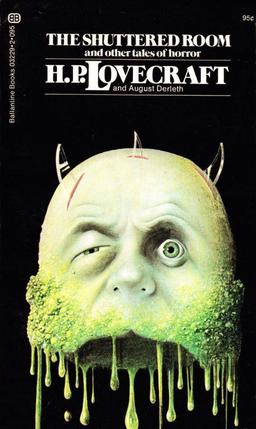 When I saw the collection above on eBay in early August, it was selling for under $24, or about $4.75 per book. I remember thinking, “I don’t want these all that much. But I want them more than that.” So I bought them.

I’m not going to try and explain the particular psychosis of collecting here (not sure I could). But there is a process of rationalization that goes along with every purchase, a method of explaining to yourself why you need that particular book. It won’t explain the collecting impulse to you, but it may help you understand what it’s like to live with a collector.

What’s interesting about these editions isn’t the cover art (although even that’s intriguing in a way, if you’re a student of the way horror has been marketed down through the decades). It’s the fact that most contain stories not included in the modern complete editions.

Have a look at The Shuttered Room, for example (at left, with the creepy and distinctive John Holmes cover art). The title story is one of Lovecraft’s more renowned stories, and was even made into a 1967 British horror movie starring Gig Young and Carol Lynley. But you won’t find it in the massive collected edition I mentioned above.

Why? Because it was mostly written by August Derleth, based on nothing more than a few lines left behind by Lovecraft when he died.

Derleth, who called himself Lovecraft’s “posthumous collaborator,” produced several volumes of fiction based on fragments left behind by Lovecraft. The Shuttered Room contains six short stories; the title story, plus “Witches’ Hollow,” “The Horror from the Middle Span,” “The Shadow in the Attic,” “The Fisherman of Falcon Point” and “The Dark Brotherhood.”

The film version of The Shuttered Room (also released under the title Blood Island) was directed by David Greene. It follows a couple who move into a house with dark secrets, and doesn’t appear to be part of the wider Cthulhu Mythos. I haven’t seen it, but if I can find a copy I may have to change that. 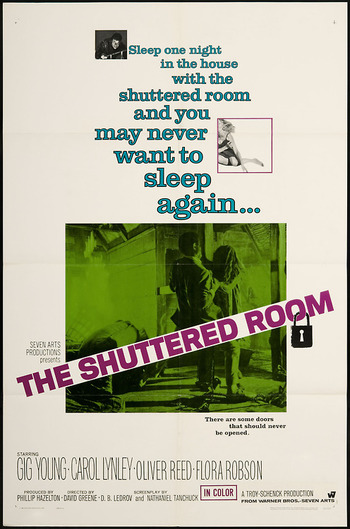 The Survivor and Others is another Derleth collection of Lovecraft pastiches/collaborations. It contains seven different stories, with this admittedly intriguing book blurb on the back:

Seven magnificent tales in which Great Cthulhu walks again, the Dunwich-Arkham country lives once more, and, in a final allegory, Lovecraft himself is portrayed in a quasi-autobiographical manner. The last, rare stories of a master craftsman.

Here’s a capture of the complete wrap-around cover, probably the best of the lot: 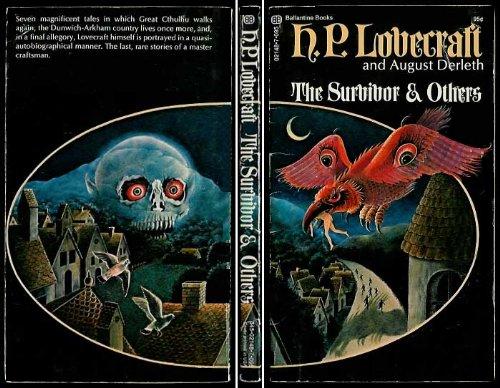 If you’re not a Derleth fan, then the two books in this set of most interest to you will be the two anthologies, Tales of the Cthulhu Mythos, Volume 2, edited by August Derleth, from 1969, and The Spawn of Cthulhu, edited by Lin Carter (1971). Both contain a fine assortment of Lovecraft-inspired fiction from a wide range of authors. 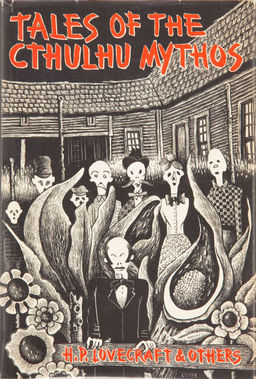 Tales of the Cthulhu Mythos, Volume 2 is the second half of a two-volume paperback reprint of the 1969 Arkham House hard cover collection at right, which assembled a mix of Weird Tales reprints and original fiction. Here’s the book blurb for the paperback edition:

The Legend of Cthulhu grew from the stories of H.P.Lovecraft, with the concept of a host of malign entities from beyond the barriers of time and space and their abominable links to certain degenerate humans. Fascinated by Lovecraft’s eerie creation, other writers — such as August Derleth, Robert Bloch, Frank Belknap Long, and Colin Wilson — added new stories to this fantastic cycle. In addition to Lovecrafts classic “The Haunter of the Dark” this volume includes stories by Robert Bloch, Colin Wilson, and others.

H.P. Lovecraft. This Century’s greatest master of weird fantasy — creator of an eldritch dimension of horror, swarming with such entities as dread Cthulhu, Yog-Sothoth, Hastur, lurkers in the earth or beyond the barriers of time.

And here’s the Table of Contents, with four Weird Tales reprints and five stories from 1969, including Ramsey Campbell’s famous “Cold Print,” and a novella by Colin Wilson:

Lin Carter’s The Spawn of Cthulhu is the companion volume to his non-fiction book H.P. Lovecraft: A Look Behind the Cthulhu Mythos (discussed last time). Here it is again, in case you forgot. 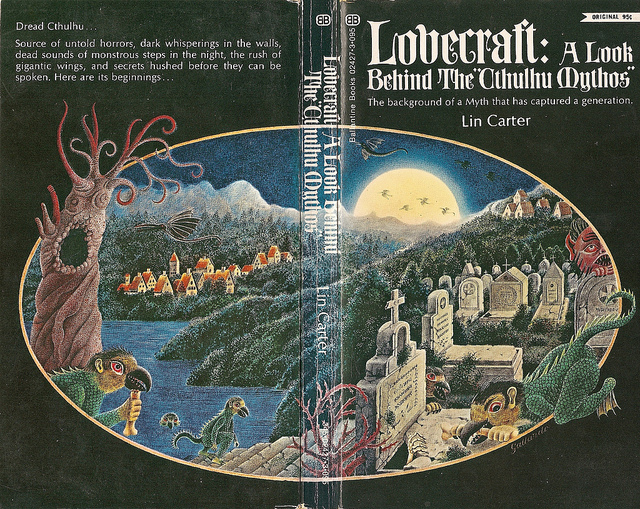 Finally, we have the last book in the set, the 1967 Lancer edition of The Colour Out of Space and Others. It’s exactly identical to the 1978 Jove edition, which I covered here (minus the Rowena cover, and if you ignore the fact the stories are in a slightly different order.)

So there you have it. Why do I collect vintage paperbacks? Because if you have the complete works of H.P. Lovecraft in a modern hardcover edition, you’re very likely to ignore the earlier editions… and in the process overlook a whole wealth of splendid fiction, art, and literary history. Buying the complete edition is lazy.

But you should also consider the Barnes and Noble hardcover. It’s great.

Next time, we’ll look at the The Arkham Hardcover editions of Lovecraft, and why you want them all. See you then.

Saw The Shuttered Room years ago on TV. There are some juvenile delinquents running around and one gets caught in some barbed wire. The old house has an insane girl in the attic. That’s about it. It’s more like a very poor updating of Jane Eyre than something by HPL, not that I like HPL movies. It’s not worth the time it takes to watch.

Those freakish John Holmes covers were my first impression of HPL. They were sold in the back of Creepy and Eerie.

As always, the nostalgia factor predominates. Those Ballentine paperbacks with the Holmes covers were my first HPL’s and they might be my favorite covers of all time – they ARE Lovecraft to me.

I’ve been collecting these over the past few years and as many have said here these are their first memories of Lovecraft’s stories and books.

For me though, it was the Ballantine/Del Rey covers from the 80s and 90s–those black and white with very noticeable red here and there.

> It’s not worth the time it takes to watch.

That’s disappointing, but I guess not too surprising. I can imagine how the story came about… Derleth found a line in Lovecraft’s notes that read “Couple moves into a house, insane girl in the attic,” and he spun the story from that.

I admit I haven’t read much Derleth, so perhaps I’m doing him a disservice, but it’s obvious he rarely (if ever) achieved the level of horror of the master. Of course, the same could be said of most 20th Century horror writers.

> Those freakish John Holmes covers were my first impression of HPL. They were sold in the back of Creepy and Eerie.

Freakish is right. I’m glad I never ran across these when I was a wee lad; they would have given me nightmare. I still find them a little disconcerting, and much prefer Murray Tinkelman moody pencilwork on the later Ballantine editions, but I have to admit — they certainly are distinctive!

> As always, the nostalgia factor predominates. Those Ballentine paperbacks with the Holmes covers were my first HPL’s and they might
> be my favorite covers of all time – they ARE Lovecraft to me.

I certainly understand the power of nostalgia. While I was never a big fan of the Holmes covers, they’re certainly visually striking. And I did come across a recent obit of Holmes (he died in 2011) that gave me a much broader appreciation of his work:

> For me though, it was the Ballantine/Del Rey covers from the 80s and 90s–those black and white with very noticeable red here and there.

I have to agree. Those Michael Whelan covers are fabulous… I’ve slowly been collecting them for years, and solely for the art (since I have most Lovecraft stories multiple times at this point.)

I’ll probably have to do a post on the Del Rey Lovecraft editions at some point. They’re well worth collecting.

[…] N (Black Gate) Collecting Lovecraft, Part II — “Why do I collect vintage paperbacks? Because if you have the complete works of H.P. […]

#Cthulhu Links Worth Checking Out! #CthulhuThursday | A Great Becoming...

[…] collection of amazing H.P.Lovecraft covers from back in the day are still […]

Some Cthulhu Links for Cthulhu Thursday…. |

[…] collection of amazing H.P.Lovecraft covers from back in the day are still […]