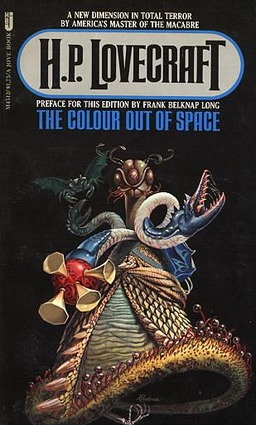 The first Arkham House books I ever bought were the 3-volume 1964 edition of the complete stories of H.P. Lovecraft (The Dunwich Horror and Others, Dagon, and At The Mountains of Madness). It was a beautiful set, and one of the best purchases I’ve ever made.

On the other hand, having the complete Lovecraft at an early age robbed me of the joy of tracking down and collecting his fiction in paperback. I’ve been trying to rectify that over the years, starting with the marvelous Ballantine Adult Fantasy editions.

In the comments section of a recent post, John H. noted his first encounter with Lovecraft was:

Colour Out of Space… the title story scared the bejeebers out of me (and to this day still creeps me out)… it was actually the Jove edition; the one with the Rowena painting of a Great Old One from “Shadow Out of Time” on the cover. Needless to say, it was the cover that drew me.

The Jove edition of The Colour Out of Space was one of two paperback Lovecraft volumes Jove published in 1978; the other was The Dunwich Horror. That’s it at right.

Ah, the foolishness of youth. Once I found pics of both books online, I knew I wanted them. I managed to track down a copy of The Dunwich Horror fairly easily and inexpensively (I wrote about it here), but The Colour Out of Space proved a little more elusive.

But that’s one of the joys of this hobby — unlike hardcover first editions and truly rare books, no paperback is really out of reach for the diligent collector. And, as I’ve mentioned several times before, only the rarest titles command anything like the cover price of a brand new paperback.

I eventually found a nearly new, virtually unread copy on eBay for $4.50 (I was the only bidder). It arrived in May and I have enjoyed it thoroughly. There’s something about a compact paperback that’s somehow vastly more readable than a heavy hardcover. And that Rowena cover really works for me.

The Horrifying Spectrum of Ultimate Evil

And the other fear-filled shades of madness, loathing and death that inhabit the alien dimensions of H.P. Lovecraft’s The Colour Out of Space.

This edition has a new preface by Frank Belknap Long. Here’s the stellar table of contents:

The Colour Out of Space was published by Jove Books in 1978. It is 219 pages, originally priced at $1.75. The cover is by Rowena Morrill.

“And, as I’ve mentioned several times before, only the rarest titles command anything like the cover price of a brand new paperback.”

That’s one of the things I love about this hobby: it’s fairly inexpensive. I’m currently trying to collect all of the Ballantine Adult Fantasy paperbacks. Amazingly, I’m sometimes buying excellent copies of these 40 year old paperbacks at less than $2 a piece!

Yep, still creeps me out to this day! And when I look at the table of contents for that edition, it seems like a particularly strong collection — Lovecraft at his finest.

(And now I really have to get that Jove edition of Dunwich Horror, just on general principles.)

(Also, James, have you gotten to the BAF edition of Man Who Was Thursday yet? That’ll probably be a bit more than $2 …)

Thanks for the comments! Also, apologies for the comedy of errors around this article this morning. My apologies to Jon Sprunk as well, whose byline this post accidentally appeared under.

I was logged in as Jon to post the “Balance of Power” article on his behalf last late night… and I clearly forgot to log out (whoops). So when I wrote this article and scheduled it for 8:00 am, it showed up under Jon’s name.

I noticed my error this morning. However, you can’t change the ID of a post once it’s created. So I just published a copy (as John O’Neill), and them deleted the version under Jon’s name — easy.

Of course, I also had to copy over the comments, which is why they vanished for several minutes. Apologies to all for the confusion!

Joe H: “James, have you gotten to the BAF edition of Man Who Was Thursday yet? That’ll probably be a bit more than $2 …”

I haven’t tried to track that one down yet. So far, the most I’ve paid for any one of these paperbacks is $6 (not including shipping). I suspected that as I cull down the list I would more than likely encounter a few that went for more money. By your comment I take it that the Chesterton volume is one such.

Any other ones that are particularly expensive?

James — Yes, the Chesterton volume is probably the most expensive; I believe it had a particularly small print run and/or limited distribution although I don’t remember the specific reason. I think I paid something in the $30-$50 range for my copy, but that was also pre-Internet.

I don’t remember any others being particularly expensive — maybe some of the Clark Ashton Smith titles, if they’re in particularly good shape, but even there I don’t remember going much above $10. Again, though, I completed my set probably 10-15 years ago, so I’m not sure of the current pricing.

Joe–After a quick internet search, I see what you mean. I found one for $30 and the next closest was for $85–yikes!

I bet you’re correct about the CAS volumes as well. CAS is fairly difficult to get in any edition, in my opinion. Thanks for drawing my attention to this.

[…] Vintage Treasures: H.P. Lovecraft’s The Colour Out of Space […]

[…] Out of Space and Others. It’s exactly identical to the 1978 Jove edition, which I covered here (minus the Rowena cover, and if you ignore the fact the stories are in a lightly different […]

[…] As for the Jove edition of The Colour Out of Space, I’m still on the hunt, but it won’t evade me for long. I’ll report back here when I succeed. [And I did — see the details here.] […]

[…] Vintage Treasures: H.P. Lovecraft’s The Colour Out of Space […]