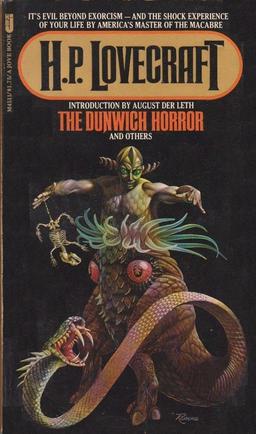 Back in December, in the comments section of my post on “H.P. Lovecraft, A. Merritt, and Appendix N: Advanced Readings in D&D,” Joe. H. noted:

My first encounter with Lovecraft was the… paperback of Colour Out of Space. I was probably too young and had no idea what I was in for — the title story scared the bejeebers out of me (and to this day still creeps me out)… it was actually the Jove edition; the one with the Rowena painting of a Great Old One from “Shadow Out of Time” on the cover. Needless to say, it was the cover that drew me.

(Hmmm … Rowena also pulled me to Clark Ashton Smith with her City of the Singing Flame cover.)

Naturally, I went searching for evidence of a Jove edition of The Colour Out of Space, and it didn’t take long to find. In the process I also discovered the companion volume, The Dunwich Horror. Both were published by Jove in 1978; see them side-by-side here.

This is why I love collecting paperbacks. I have the Arkham House three-volume set of Lovecraft’s collected fiction in hardcover, but I still find different editions delightful — particularly the compact and inexpensive paperbacks, and especially when they’re as eye-catching as these two. Rowena is a very gifted artist and her interpretations of a Great Old One (on The Colour Out of Space) and Wilbur Whateley (for The Dunwich Horror and Others) are wholly unique and vibrantly real.

Of course, the other reason I love collecting paperbacks is the joy of the hunt, and by late December I was on a hunt for both volumes.

Both are relatively easy to come across on eBay and at various online bookstores — but finding them at a reasonable price is a different matter. I found good condition copies priced from $6 to $18.95 (plus shipping) immediately, but it’s rare indeed for the patient collector to be forced to pay more than the price of a new paperback, and I didn’t expect this to be an exception.

It wasn’t. Once I widened my search to include lots, I found a copy of The Dunwich Horror and a second Lovecraft volume, At the Mountains of Madness, for $7 (including shipping) and soon they were mine.

Here’s the enticing text from the back cover:

A Journey With the Prince of Darkness

A nerve-sizzling safari into seven dark levels of the supernatural. From the cosmic vampires of alien dimensions, to the vile spirits who stalk human prey.

Enter the grotesque domain of rabid animals, damned souls, and unknown forces crouched at the edge of man’s awareness. Where you’ll encounter the unholy being defiling Dunwich Castle and its unborn generations. A being more terrifying than death itself…

The introduction is a reprint of an essay by the co-founder of Arkham House, August Derleth, which originally appeared in the 1963 Arkham volume The Dunwich Horror and Others: The Best Supernatural Stories of H. P. Lovecraft.

Here’s the complete Table of Contents of The Dunwich Horror and Others:

The Dunwich Horror and Others was published by Jove Books in 1978. It is 191 pages, originally priced at $1.75. The cover is by Rowena Morrill.

As for the Jove edition of The Colour Out of Space, I’m still on the hunt, but it won’t evade me for long. I’ll report back here when I succeed. [And I did — see the details here.]

John, thanks. This article brings up a point I’ve been thinking a lot about lately. Great covers. I fear the e-book market is wearing away at great covers with too many covers today looking similar and with the focus upon what looks good in a small jpg image on Amazon instead of what looks good in the hands, or on the shelves. It’s understandable to some extent, mainly the covers being a marketing tool, but I do miss a lot of those covers from the 1970s and early ’80s.

The first Lovecraft I ever read was in Ballantine paperbacks that were published in the early 70’s – I see that mine are the third printings from 1974. The covers are by John Holmes, and they depict six different horrific faces (for the six volumes that Ballantime published) against a stark black background. They remain for me some of the greatest, most evocative cover images that I’ve ever seen.

What edition was Mountains of Madness?

That Arkham House edition of Dunwich Horror was the one they had in the library. Most of my Lovecraft paperbacks were the later Ballantine editions with the Michael Whelan covers, except for Dream-Quest of Unknown Kadath, which was the printing that immediately followed the Ballantine Adult Fantasy edition. I did get all four volumes of Lovecraft from Arkham House (Dunwich, Mountains, Dagon and Horror in the Museum), but they were later (Joshi-revised) printings.

Yeah, I miss cover art too. But I really, really love my Kindle.

My public library had the sixties editions of the Arkham House books. They’re so much better than the later ones on the Joshi editions.

I remember seeing the bizarre John Holmes covers in the back of Creepy and Eerie before I even knew who HPL was.

While I love the Rowena covers, my personal favorite cover is for the first Lovecraft book I read, The Shadow Over Innsmouth and Other Stories of Horror from Scholastic Books (!).

Hey, I sat next to a Nameless Horror when I was in the fifth grade…

> This article brings up a point I’ve been thinking a lot about lately. Great covers. I fear the e-book market is
> wearing away at great covers with too many covers today looking similar

Great point! And you’re absolutely right… my eye glazes over when I see all those $0.99 e-book thumbnails at B&N and Amazon. They all look alike, a lot of Photoshopped pics and moody landscapes. Real book design takes real talent, which is why successful book publishers pay top dollar for it.

But the early days of the paperback industry were filled with appalling covers too. Every new industry takes a while to find its footing. I’m a great believer in the power of the market to weed out the weaker offerings, and gradually replace them with titles that make money.

And loath as I am to spit in the bouillabaisse, is this Rowena cover really all that great? For me, anyway, Lovecraft covers are better when they’re a bit more abstract, because when an artist tries the literal approach – as Rowena did here – it just emphasizes that fact that HPL came up with some incredibly goofy looking enteties. The thing depicted here looks more like a rampaging pineapple than anything else. Not even Count Floyd would find this scary…

Lovecraftian leftovers for week 12 | The Scrawl of Cthulhu

[…] Vintage Treasures: The Dunwich Horror and Others by H.P. Lovecraft […]

Yeah, your point is well taken (and I LOL’d at your line about the rampaging pineapple!) And to some extent I agree that the best Lovecraft art remains a little more abstract. Although, to be perfectly honest, some of my favorite Lovecraft art can be found on the covers of Chaosium’s CALL OF CTHULHU adventures like KINGSPORT, and they’re not really all that abstract: 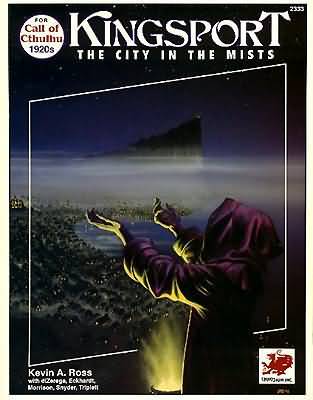 Anyway, nothing is as subjective as art. But I think the joy for me comes from seeing an artist I really admire (Rowena) coupled with a writer I treasure (Lovecraft). Is the result the definitive version of Lovecraft? No, but it doesn’t need to be. It’s enough for me to see Rowena bring her talents to bear on Lovecraft’s creations.

Yeah, poor Wilbur kinda looks like a pineapple. What can I tell you? I still found her interpretation delightfully unique, and wholly successful. And that was more than enough to make it worth 7 bucks for my copy.

[…] Men, Martians, and Machines, Michael Shea’s Polyphemus, and H.P. Lovecraft’s The Dunwich Horror and Others. As long as I’m on a roll, I figure I should continue in the same vein. So this week, I want […]

[…] two-volume paperback set of Lovecraft’s finest stories in 1978: The Colour Out of Space and The Dunwich Horror and Others, with great covers by Rowena. Also pretty easy to find (I bought copies of both for about five […]