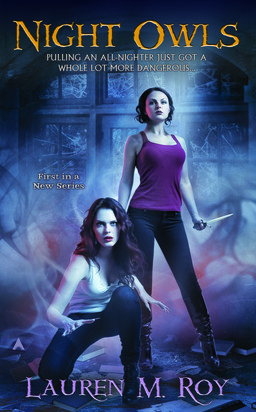 I love fantasies about book stores. They already seem magical to me anyway, so they’re a logical setting for tales of strange goings-on and otherwordly adventure. Add a cast of quirky characters and a supernatural menace or two, and I’m sold.

Night Owls bookstore is the one spot on campus open late enough to help out even the most practiced slacker. The employees’ penchant for fighting the evil creatures of the night is just a perk…

Valerie McTeague’s business model is simple: provide the students of Edgewood College with a late-night study haven and stay as far away as possible from the underworld conflicts of her vampire brethren. She’s experienced that life, and the price she paid was far too high for her to ever want to return.

Elly Garrett hasn’t known any life except that of fighting the supernatural beings known as Creeps or Jackals. But she always had her mentor and foster father by her side — until he gave his life protecting a book that the Creeps desperately want to get their hands on.

When the book gets stashed at Night Owls for safekeeping, those Val holds nearest and dearest are put in mortal peril. Now Val and Elly will have to team up, along with a mismatched crew of humans, vampires, and lesbian succubi, to stop the Jackals from getting their claws on the book and unleashing unnamed horrors…

I can’t find much about author Lauren M. Roy — I eventually uncovered her website — but I did discover she is a bookseller, in addition to being a first-time novelist and a freelance writer for games such as Trail of Cthulhu, Dragon Age, and A Song of Ice and Fire Roleplaying. I also found a pic of her wearing a cool hat at GoodReads. I think all authors should be required to wear cool hats, so we can spot them in public. And buy them lunch.

Night Owls was published on February 25, 2014 by Ace Books. It is 296 pages, priced at $7.99 for both the paperback and digital versions. It is the first volume in the Night Owls series.

Sheesh! These covers. Jeans and wife-beaters (risqué wife-beaters) seem to be the new hero (or heroine) attire.

I’m clearly not in this publisher’s marketing demographic.

I was thinking the same thing…

You’re right — in general, I don’t think a lot of urban fantasy is aimed at the old-school fantasy reader. Much of it is intro-level fantasy, very friendly to new readers, and especially young readers, who are sometimes intimated by 800-page secondary world fantasy.

In my opinion, the book aisles could use more books that are friendly to new readers.

As to the cover art… you know, I really feel for modern fantasy Art Directors. I know I scan the book shelves VERY quickly, and a cover has two seconds (or less) to grab my attention.

So the cover an Art Director commissions has to look enough like every other urban fantasy book that an impatient reader can spot it from 10 feet away and immediately identify it as urban fantasy. That means that the leeway they have to go far outside the visual language of the sub-genre is VERY limited.

Regardless of how fresh and new the book is, it has to resemble every other book in the genre, or its pick-up in the book aisle by its target audience is severely diminished. A fact of life when you’re dealing with genre fiction.

I get it. It was just good timing with the recent post on book covers.

A lot of these urban fantasy/ teen paranormal romance novel covers are so similar it’s hard to tell series apart.

I guess that’s why it’s good to read reviews of books before you buy them, instead of basing it on a neat cover.

Although the neat cover approach has work a couple times on finding me a good book.

I completely understand and sympathize with book sellers and publishers. My comment was not meant so much as a criticism. If such covers keep the fantasy genre alive, then “let a thousand flowers bloom.”

Also, like Glenn, I more highly depend on reviews, rather than covers, to instruct my book buying nowadays. AND, if I read a really good review, I’d buy the book and read it regardless of the cover.

> Although the neat cover approach has work a couple times on finding me a good book.

I know! There’s a blog in there about all the times great covers have steered me towards great fantasy books. Maybe great books inspire great art?

It’s easier said than done! I’d love to find a fall hat for my evening walks with the dog. But usually I end up grabbing my well-worn Canadian toque.

Speaking of blog posts… there’s definitely a fascinating post on the topic of fashion on fantasy covers crying out to be written. Maybe I could get our fashion correspondent, Patty Templeton, to write it? (She’s the one who convinced me we needed a “Fashion” category on the blog, over there on the left.)

But yeah, your comments on the casual attire on most urban fantasy novels are on the mark. I won’t be able to pick up an urban fantasy now without expecting a purple tank top.