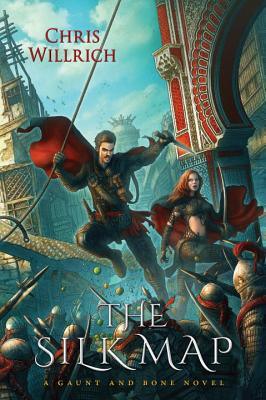 We published Chris Willrich’s gloriously imaginative sword-and-sorcery tale “The Lions of Karthagar” in Black Gate 15. I’ve been very curious about his popular Gaunt and Bone tales, which have appeared in The Magazine of Fantasy & Science Fiction, Flashing Swords, Beneath Ceaseless Skies, and other places. The first Gaunt and Bone book, The Scroll of Years — which contained a complete novel plus the very first published story, “The Thief with Two Deaths” (from F&SF, June 2000) — was released in September of last year and now we have the details on the sequel.

At the end of The Scroll of Years, the poet Persimmon Gaunt and her husband, the thief Imago Bone, had saved their child from evil forces at the price of trapping him within a pocket dimension. Now they will attempt what seems impossible; they will seek a way to recover their son. Allied with Snow Pine, a scrappy bandit who’s also lost her child to the Scroll of Years, Gaunt and Bone awaken the Great Sage, a monkeylike demigod of the East, currently trapped by vaster powers beneath a mountain. The Sage knows of a way to reach the Scroll — but there is a price. The three must seek the world’s greatest treasure and bring it back to him. They must find the worms of the alien Iron Moths, whose cocoons produce the wondrous material ironsilk.

And so the rogues join a grand contest waged along three thousand miles of dangerous and alluring trade routes between East and West. For many parties have simultaneously uncovered fragments of the Silk Map, a document pointing the way toward a nest of the Iron Moths. Our heroes tangle with Western treasure hunters, a blind mystic warrior and his homicidal magic carpet, a nomad princess determined to rebuild her father’s empire, and a secret society obsessed with guarding the lost paradise where the Moths are found — even if paradise must be protected by murder.

Chris Willrich is also the author of the Pathfinder Tales novel The Dagger of Trust.

Ok, ok! The Scroll of Years is on its way to me from Amazon. I hope you get a kickback, John.

Every time a cash register rings at a book store, a Black Gate blogger gets his wings.

John, this is the novel I tried to buy for BG but Chris pulled out when an agent got wind of us wanting it 🙁 However, looks like Pyr picked him up, so good for Chris!

Sounds like good ol s&s insanity! I’ll have to get this one, thanks john 🙂