In Part I of this series, I looked at the Ballantine paperbacks edited by August Derleth and published by arrangement with Arkham House in the early 70s. In Part II, we examined the Lancer and Ballantine paperbacks of the late 60s and early 70s. In Part III, I want to showcase the volumes that most serious Lovecraft collectors start with — the Arkham House collected works, published in three volumes: The Dunwich Horror and Others, At the Mountains of Madness and Other Novels, and Dagon and Other Macabre Tales, plus a collection of Lovecraft’s revisions, those tales he re-wrote for various clients to make them acceptable for Weird Tales, The Horror in the Museum and Other Revisions.

Now I want to start off by saying that, while these four books are some of the most important in 20th Century Horror — and, indeed, they form the cornerstone of any serious horror collection — they still represent a pretty hinky way to gather Lovecraft’s fiction. Why? The Dunwich Horror is subtitled “The Best of H.P. Lovecraft.” At the Mountains of Madness collects his longer tales (At the Mountains of Madness, The Case of Charles Dexter Ward, The Dream-Quest of Unknown Kadath, as well as the rest of the Randolph Carter stories.) Which leaves Dagon with the unofficial subtitle, All the Stuff That’s Not Lovecraft’s Best. Seems a strange way to assemble a third volume, that’s all I’m saying.

Still, you can’t really argue with success — and these four volumes were marvelously successful. They were the backbone of Arkham House’s entire library. The Dunwich Horror was originally published in 1963 and, like the other three, is still in print in hardcover today, an astonishing 52 years later. I honestly can’t think of a single example of another book, by any author, that’s remained in print in hardcover nearly as long.

The books were published in the following order:

The cover artwork for the first three was by the great Lee Brown Coye. The cover for The Horror in the Museum was by the cartoonist Gahan Wilson. All four were edited by August Derleth, the co-founder of Arkham House. Derleth founded Arkham for the express reason of publishing and promoting Lovecraft, who died in obscurity. Today Lovecraft is acknowledged as perhaps the greatest single horror writer of the 20th Century. That’s largely due to to Derleth, and these four books are arguably his greatest accomplishment.

That’s not to imply they were perfect, however. Derleth died in 1971, and in 1985-1989 all four books were re-issued, re-edited by S.T. Joshi and with brand new covers by Raymond Bayless. Joshi painstakingly corrected the texts for every story, using the original manuscripts whenever possible. The result is known today as the Corrected Third Edition, and the first definitive edition.

Of course, that immediately rendered the Derleth-Coye editions collector’s items. They are rather scarce today, and command fairly high prices when you can find them.

These editions remained definitive for roughly a dozen years, until the covers were refreshed again in 2001, this time with a rather striking series of old-school images by Tony Patrick. As far as I’ve been able to determine, the text for these volumes is largely identical to the Corrected Third Edition above.

The Derleth-Coye editions were the first books by Lovecraft I ever purchased, some time in the early 80s. Although I’d been aware of him for years, it wasn’t until I started playing Chaosium’s superb role playing game Call of Cthulhu that I became seriously interested. I eventually purchased the editions with the Patrick covers two decades later, to get the corrected versions.

For the completests out there, here’s the jacket copy for the 1963 August Derleth edition of The Dunwich Horror and Others:

The best macabre tales of the outstanding twentieth century American writer in the genre are to be found in this book. Here are such classics stories as the title story, ‘The Colour out of Space,’ ‘The Rats in the Walls,’ ‘The Music of Erich Zann,’ ‘The Shadow of Time,’ and ‘The Outsider.’ Here, too, are those memorable novellas in the Cthulhu Mythos — ‘The Whisperer in Darkness,’ ‘The Thing on the Doorstep,’ and ‘The Shadow Over Innsmouth,’ as well as such chilling tales of pure grue as ‘In The Vault,’ and ‘Pickman’s Model.’

No writer of our own century in America has so captivated the imagination of readers devoted to the macabre as the late H.P. Lovecraft. His best tales have been out of print in America for a decade — some of them for far longer; this collection is a cornerstone not only for any Lovecraft shelf but also for any library of fantasy of our time.

The stories were selected and are introduced by August Derleth, who, with Donald Wandrei, collected and published the Lovecraft work, seen in retrospect a quarter of a century after Lovecraft’s death.

The jacket drawing represents Wilbur Whateley of The Dunwich Horror, as conceived by the distinguished artist, Lee Brown Coye, whose macabre conceptions decorated such anthologies as Sleep No More, Who Knocks? and The Night Side. Mr. Coye lives and works in upstate New York. 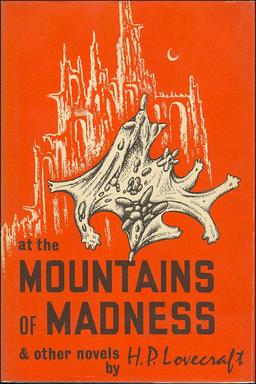 The Derleth-Coye editions were in print for over two decades with virtually no changes — although, for reasons unknown, some later printings of At the Mountains of Madness had a red cover (see right).

Here’s the jacket text for the corrected 1987 edition of At the Mountains of Madness:

Here at last is the definitive Lovecraft – the second in a three-volume set of the collected macabre fiction that embodies the author’s own final thoughts and stylistic preferences. Based upon S.T. Joshi’s extensive and painstaking collation of extant manuscript materials, this new Lovecraft edition from Arkham House is the only completely authoritative text and supersedes all previous editions.

Of the three short novels included in the present volume, “At the Mountains of Madness” remains one of the few works of American science fiction from the 1930s that can be read today for genuine literary pleasure rather than dutiful historical interest, while “The Case of Charles Dexter Ward” is perhaps Lovecraft’s most precisely wrought masterpiece of demonic horror. The third short novel, “The Dream-Quest of Unknown Kadath,” presents an odyssey through the byways of dream-land and is one of the several narratives featuring Lovecraft’s alter ego, Randolph Carter.

In the whole range of fantastic literature, Lovecraft created a new form that is neither pure fancy nor pure science fiction. He combined a factual and accurate scientific knowledge with its extension to the absolute limit in supernatural bizarrerie. His work defies classification, for it is as much myth as reality – both lore and legend at their haunting, haunted best, and at the same time science at its most provocative. His tales have been termed the finest weird fantasy ever written, and yet also the most superbly literate science fiction. Lovecraft’s work has achieved an honored eminence among the great visionary fiction of the ages precisely because, while betraying no trace of the commonplace, his stories are based convincingly in the world of everyday reality, yet lure the mind into the farthest reaches of the imagination, the star-flung spaces of the universe, the cosmic realm of a master mythmaker.

And here’s the relevant text for Dagon:

All the remaining fiction by H.P. Lovecraft is collected in this final volume, which includes every type of imaginative story in which the author excelled — Dunsanian fantasies, Gothic horror, and tales of the Cthulhu Mythos. Though secondary to the remarkable fiction preserved in The Dunwich Horror and At the Mountains of Madness, these early works constitute absorbing testimony to Lovecraft’s creative development. Completing this volume is the only critical recension of “Supernatural Horror in Literature,” the single most significant essay on the horror genre.

I have all four Bayless volumes. The first Arkham House I read (from the library, after I discovered Lovecraft via the paperback Colour Out of Space) was the original version at the top of the article; I’ve never seen the covers for the other three original volumes.

The original version of what, Joe? The Dunwich Horror?

Sorry — Yes, Dunwich Horror. Supplemented with whatever paperbacks I could lay hands on — that was around the time they started doing the rereleases with the Whelan covers.

Ah – the Whelan covers on the Del Rey editions deserve their own entry in this series. And they’ll get one!

I have the Bayles ones myself, and would give them and the Joshi corrections up in a heartbeat to have the Coye covers. They are beautiful.

The eternal dilemma — the new, textually-superior editions’ covers aren’t as good as the old versions.

Well, I do actually like Bayless. Not as enthused about Patrick, although they’re not without their charms.

The Coye covers are my personal favorites… but perhaps because they were the first ones I bought, all those years ago. To me, those covers are especially evocative of the prose and strange horrors of Lovecraft, somehow both old-fashioned and still uniquely powerful.

I admit a fondness for the Patrick covers, too. It’s the way they remind me of classic monster movies, and in the best way. I’m not sure how well they fit Lovecraft, especially, but they do speak to me of old-fashioned horror.

> The eternal dilemma — the new, textually-superior editions’ covers aren’t as good as the old versions.

John – The public library I worked in during high school had all the Coye covers. I was seemed to be the only person who took them out.

The first Del Rey edition with the provocatively disturbing Whelan wraparound cover was my gateway as well, back around 1991. Best of H.P. Lovecraft: Bloodcurdling Tales of Horror and the Macabre

I’m with Nick on this one: The Del Rey editions with the Whelan covers were my entry points into Lovecraft. I own the new Penguin editions too, but I still like going to the Del Reys when I re-read Lovecraft.

My only complaint about those Whelan covers is that they seem to have little to do with the actual stories. At best–or at least this is how I justify my affection for the them–the Whelan covers do a good job of intimating the cosmic horror of Lovecraft’s tales.

Right! It is hard to find any direct correlations between the stories and individual images in Whelan’s collage of creepiness. The painting seemed to be more a good generic representation of “bloodcurdling horror and the macabre.”

John, aren’t you forgetting about the holy grail of Arkham Lovecraft?

The Outsider and Others, the book that started Arkham House?

> The painting seemed to be more a good generic representation of “bloodcurdling horror and the macabre.”

Right you are. Whelan talked about it Michael Whelan’s Works of Wonder (I think). As I recall, he was given carte blanche to create what he wanted for the Del Rey line, and he painted a single giant canvas that they cut into sections to cover the individual paperbacks. And you’re quite right – there wasn’t anything particularly Lovecraftian about the image, it was a unique horror creation of Whelan’s.

> John, aren’t you forgetting about the holy grail of Arkham Lovecraft?
> The Outsider and Others, the book that started Arkham House?

Arin — Oh, I haven’t forgotten! I’ll cover that when I get to Part VII — THE RARES.

Any timeline on when future portions of this series will be published?

It will be on onlyfans just wait.

Thanks for your interest neodelbert!

I still may proceed with the next installment, on the anthologies. Later installments in the series were intended to cover “The Rares,” those hard to find editions that still captivate our attention today. However, I’m not a rare book collector and there are plenty of collectors who are vastly more qualified to write that article than I am.

So for now I’ll keep this series at three installments, until (or if) I can find someone qualified to write the later ones.