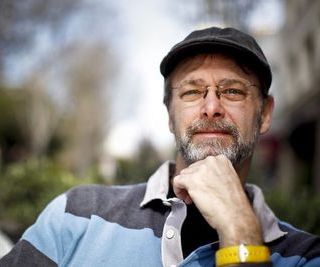 My Guest-of-Honor interview with Christopher Moore, author of Bloodsucking Fiends, Coyote Blue, and many other fine fantasy novels, has just been posted. Here’s a sample.

So, did you became a full-time writer with your very first novel? Because, damn.

I did. Disney bought the film rights to Practical Demonkeeping before the book rights ever sold and that gave me enough money to quit my job as a waiter and go to writing full time. Although I didn’t get paid for six months and I ended up kiting credit cards and eating grilled ham and cheese sandwiches on credit at my friend’s diner… I wrote my first three books in his diner.

I’m interested in what you felt you were writing. What genre, I mean. I frequently hear you described as a “comic fantasy” writer. Did you set out to be a fantasy writer?

I didn’t really think about genre. I knew what I was doing would be “between genres.” I had read an essay by Kirby McCauley, who was, I think, Stephen King and George R.R. Martin’s agent at the time, that said, “any genre can be combined with horror except for whimsy. Whimsy and horror just won’t work.”

Something like that. So I decided, “Hey, I think I’ll write a whimsical horror novel.”

Read the complete interview at the Windycon 42 blog.