Richard Cowper was a British SF and fantasy writer who published over a dozen novels and four short story collections between 1967 and 1986. Sadly, much of his output never made it across the Atlantic. Ballantine reprinted his first two novels in paperback, Breakthrough (1969) and Phoenix (1970), and DAW published perhaps his most famous novel, The Twilight of Briareus, in paperback in 1975. But those two ignored the rest of his work.

Fortunately, in the late 70s and early 80s Pocket Books brought six of his novels to the US, including the complete The White Bird of Kinship trilogy, and they were the sole publishers of his collection, Out There Where the Big Ships Go. It was the Pocket editions that first caught my eye on bookstore shelves in Ottawa — particularly the three gorgeous Don Maitz covers above. (You’ll note the maple leaf emblem on the top left of the Canadian editions.)

Here’s the back cover scans.

Cowper received perhaps the greatest acclaim for the opening novel of The White Bird of Kinship trilogy, The Road to Corlay, published in the US by Pocket in September 1979. It was nominated for the British Fantasy, Nebula and Balrog awards, and placed 7th on Locus’s annual list for Best Novel. The sequels followed a few years later:

Publication dates are for the British first editions. We discussed The White Bird of Kinship trilogy here last year.

The first Pocket Book by Richard Cowper, Clone, was first published in the US by Avon in 1974. It appeared from Pocket in 1979 with a cover by an unknown artist. 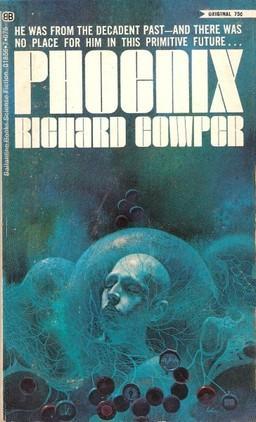 Richard Cowper was a pen name for John Middleton Murry, Jr. He died in 2002. His friend Christopher Priest claimed he died of a broken heart, after the death of his wife Ruth four weeks earlier.

His other novels include:

He also published three short story collections that have never appeared in the US or Canada:

I have seen many a used copy of Profundis, but I never realized how seriously delirious it is. Nor had I recalled that Richard Cowper was John Middleton Murry Jr. Which is one heck of a literary legacy to be working out from under.

Those first three have great covers!

> Nor had I recalled that Richard Cowper was John Middleton Murry Jr. Which is one
> heck of a literary legacy to be working out from under.

I’m embarrassed to admit that I didn’t know who John Middleton Murry was, until I looked him up just now. 60 books, thousands of essays and reviews, and the husband of Katherine Mansfield. John Cowper must have had a fascinating childhood!

>Those first three have great covers!

I know, right? Maitz is a genius,