William Barnwell isn’t a name well remembered today. He published only three novels, a postapocalyptic fantasy trilogy set in Ireland called The Blessing Trilogy, and a short prequel, before he vanished.

All three books in the trilogy were published by Pocket/Timescape.

The 80s, the decade of The Road Warrior and The Terminator, was a popular time for these nuclear postapocalytpic epics. After the collapse of the Soviet Union and the end of the Cold War, they seemed to fall out of style. Today, the future is a grim young adult dystopia. I don’t know about you, but I preferred the future in the 80s.

Here’s the back covers and plot descriptions for all three. [Click for bigger versions.] 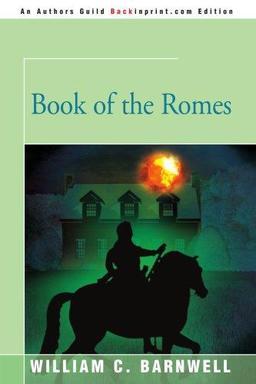 Based on these novels Peter Nicholls, co-editor of the Science Fiction Encyclopedia, said that Barnwell wrote like “a member of a pseudoscience cult,” a description I always rather liked. Barnwell himself described the series as one that “dramatizes the elusive nature of evolution’s purpose,” whatever that means.

According to Wikipedia, Barnwell published a prequel, Book of the Romes, in 1985, but I’ve never seen a copy, and I have no idea who the publisher was. It was reprinted by Barnwell in June 2001 through self-publishing company iUniverse. Here’s the description.

As the logic of evolution comes to a head in the middle of the Nineteenth-Century, an older Frenchman, haunted by an odd event in his youth, tracks the journey of a strange stone object westward to a pre-Civil-War America where he and his cousin, a young scientist, and a strong-willed woman they meet under trying circumstances, match wits with a wealthy European entrepreneur to try to prevent, if they can, the possible loss of one world and the uncertain birth of another.

The last two novels in the series have never been reprinted, and have now been out of print for over 30 years. The Blessing Papers, however, was reprinted in hardcover by Colin Smythe in 1981, and as an ebook by Monje Press in July 2013.

Here’s the publishing details for the Pocket paperback editions:

These sound pretty interesting. Mark Lawrence’s Broken Empire Series is a more recent take on the atavistic medieval world following the destruction of modern societies in a nuclear holocaust. It works really well. I usually hate any sort of mixing of medieval-like fantasy worlds with modern technology, but Lawrence pulls it off (probably for me because the modern technology is very minimally present).

I’ve heard of lot of great things about the Broken Empire series. Mark Lawrence is one of the fastest-rising stars on the fantasy scene.

He has published some ebooks since then

Nice find, JLB. Thanks for the link!