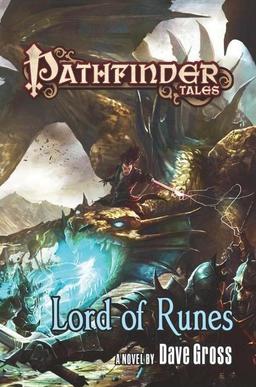 I’ll admit, I was surprised to read the announcement from Tor and Paizo back in February, that Tor would become the publisher for the popular Pathfinder Tales line of novels. But it certainly makes business sense — Tor is the biggest publisher in the genre, and has unprecedented distribution and marketing muscle, and this allows Paizo to focus on the creative side of things.

The books have shifted to a new format (trade paperback), and will be available for the Kindle for the first time, but nothing else appears to have changed. The line remains in the capable hands of its longtime editor, James L. Sutter.

The first title under the new arrangement, Lord of Runes by Dave Gross, arrives next week. Here’s a snippet from the press release:

Since its launch in 2008, the Pathfinder Roleplaying Game has topped RPG sales charts for several years running, and has grown to become one of the most important and best-loved tabletop RPGs in the world. In 2010, the Pathfinder Tales novel line was launched by the game’s publisher, Paizo, and has included more than 20 exciting fantasy novels by Tim Pratt, Michael A. Stackpole, Ed Greenwood, James L. Sutter, Howard Andrew Jones, Liane Merciel, and others. Since then, Pathfinder has been translated into five languages, has released a widely popular card game, and has inspired computer games, comic books, audio drama, gaming figurines, and toys.

Now Tor Books and Paizo are pleased to announced a publishing venture with Tor releasing a new and original novel set in the Pathfinder universe: Pathfinder Tales: Lord of Runes by bestselling author Dave Gross. Lord of Runes sees the return of the Sherlockian aristocrat and Pathfinder Varian Jeggare and his hellspawn bodyguard and sidekick, Radovan, for their fifth standalone novel. When Varian is bequeathed a dangerous magical book by an old colleague, he and Radovan are pulled into a mystery and set on the path of a powerful necromancer seeking to become the new avatar of an ancient and sinister demigod — one of the legendary Runelords. But in saving the world, will Varian and Radovan lose their souls?

We’ve covered many Pathfinder Tales releases over the last few years, including:

See all of our coverage of upcoming releases here.

Small detail: Pathfinder Tales were available in digital format before, just not in Kindle.

And in October, the latest Pathfinder novel from our own Howard Andrew Jones (what’s his title, Grand Exalted Poobah?) will hit shelves and electronic devices.

> Small detail: Pathfinder Tales were available in digital format before, just not in Kindle.

Thanks, Theodric. I’ve corrected the article.

Whoa, how did I miss that cover reveal? Thanks for the link – I need to feature this one in a Future Treasures piece ASAP!

A few chapters in and I am loving Lord of Runes.

Terrific — glad to hear it Theodric!