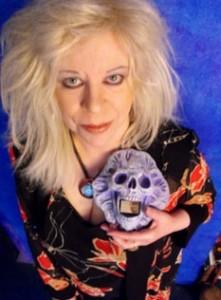 Tanith Lee’s website, tanith-lee.com, is reporting that she passed away on May 24th.

I read my first Tanith Lee novel, Kill the Dead, in 1987. It was her twenty-fifth novel. In her long career she wrote 90 novels and some 300 short stories, as well as two episodes of the BBC series Blake’s 7. Lee often mentioned that she was unable to read until she was 8, due to a mild form of dyslexia, and she began to write at the age of 9. Her first novel was the children’s book The Dragon Hoard (1971); her first book for adults, The Birthgrave, the first novel in The Birthgrave Trilogy, was published four years later. Lee wrote this small epitaph for her website, and it was posted this morning:

Though we come and go, and pass into the shadows, where we leave behind us stories told – on paper, on the wings of butterflies, on the wind, on the hearts of others – there we are remembered, there we work magic and great change – passing on the fire like a torch – forever and forever. Till the sky falls, and all things are flawless and need no words at all.
— Tanith Lee

Sad news indeed, and an irreplaceable loss to fantastic fiction. The Birthgrave is one of the finest of all “science fantasy” novels, and she continued to produce high quality work even after such a stunning start. I read one of her older books, “Volkhavaar,” just last year and was blown away by it – a singleton of under 200 pages that has more real magic and color and imagination in it than many multivolume epics.

She was and is a legend. Her immortal legacy will live on through her superb body of work. All stories must come to an end eventually. Rest In Peace, Queen of Stories. You will be missed.

High praise for a debut novel, indeed. I was making a short list of Tanith Lee novels to investigate, and I will have to add that one to the list.

> Her immortal legacy will live on through her superb body of work.

She left behind a huge body of work. I hope the best of it remains in print for a new generation to discover.

John: Not to be a contrarian, but THE BIRTHGRAVE is a full-fledged fantasy (not a “science fantasy”, and it’s got a few rough edges–it was her FIRST adult novel, after all! However, the seeds of her genius are there. They didn’t actually sprout into towering legend until the FLAT EARTH tales, beginning with NIGHT’S MASTER and continuing through the entire FLAT EARTH series. So many fantastic series over four decades…it’s amazing.

Sad to hear about that. I have tons of her books.

It’s too bad many of her books went out of print so quickly.

I’d argue that, John. I think The Birthgrave exactly matches the parameters of “Science Fantasy” as defined in the Clute/Nicholls Encyclopedia of Science Fiction. (They do admit that the term “has never been clearly defined.”)

I’ve only read her short stories, but never found a bad one in the pile. Quality work. A loss.

Well, that totally sucks. One of my favourite authors ever. I find the Flat Earth tales to be as engrossing now as they were so many years ago. She will be missed.

And now I have to figure out how to register my US Kindle with a UK address so I can buy all of the ebooks that are criminally unavailable in the US store.

As for the actual work, Flat Earth remains the towering pinnacle, but Birthgrave was a remarkably strong debut. (Although I do have a bit of a quibble with the turn it takes at the very, very end.) I also loved the Vis books — Storm Lord and Anackire. (And the third one, although I discovered that much later and don’t remember it as vividly.) And her many, many singletons including Volkhavaar and Sung in Shadow and Lycanthia and on and on and on. She will be missed.

Joe, I also thought that Lee overexplained on the last two pages of The Birthgrave. But what a book, however you classify it!

Such a shame. Her work was fantastic (my faves being the Flat Earth series, which are still among the items I try to pimp on people at cons.)

Cyrion was a good sword and sorcery collection, and had good puzzle stories. The John Campbell effort to steal some of Ellery Queen’s market doesn’t seem to have lasted in later writers- I only see it in Niven nowadays. I pray Lee is drinking sapphire wine Beyond.

> I find the Flat Earth tales to be as engrossing now as they were so many years ago.

> As for the actual work, Flat Earth remains the towering pinnacle…

> my faves being the Flat Earth series…

Seems pretty clear that the FLAT EARTH books are the ones I should turn to as I celebrate her career. Although I admit I’m very tempted by DAYS OF GRASS and COMPANIONS ON THE ROAD.

> It’s too bad many of her books went out of print so quickly.

That’s true, although she’s very easy to collect, especially in paperback. Virtually all of her DAW material is available very inexpensively. I just bought a collection of nearly a dozen paperbacks in terrific shape for under $30, including shipping: 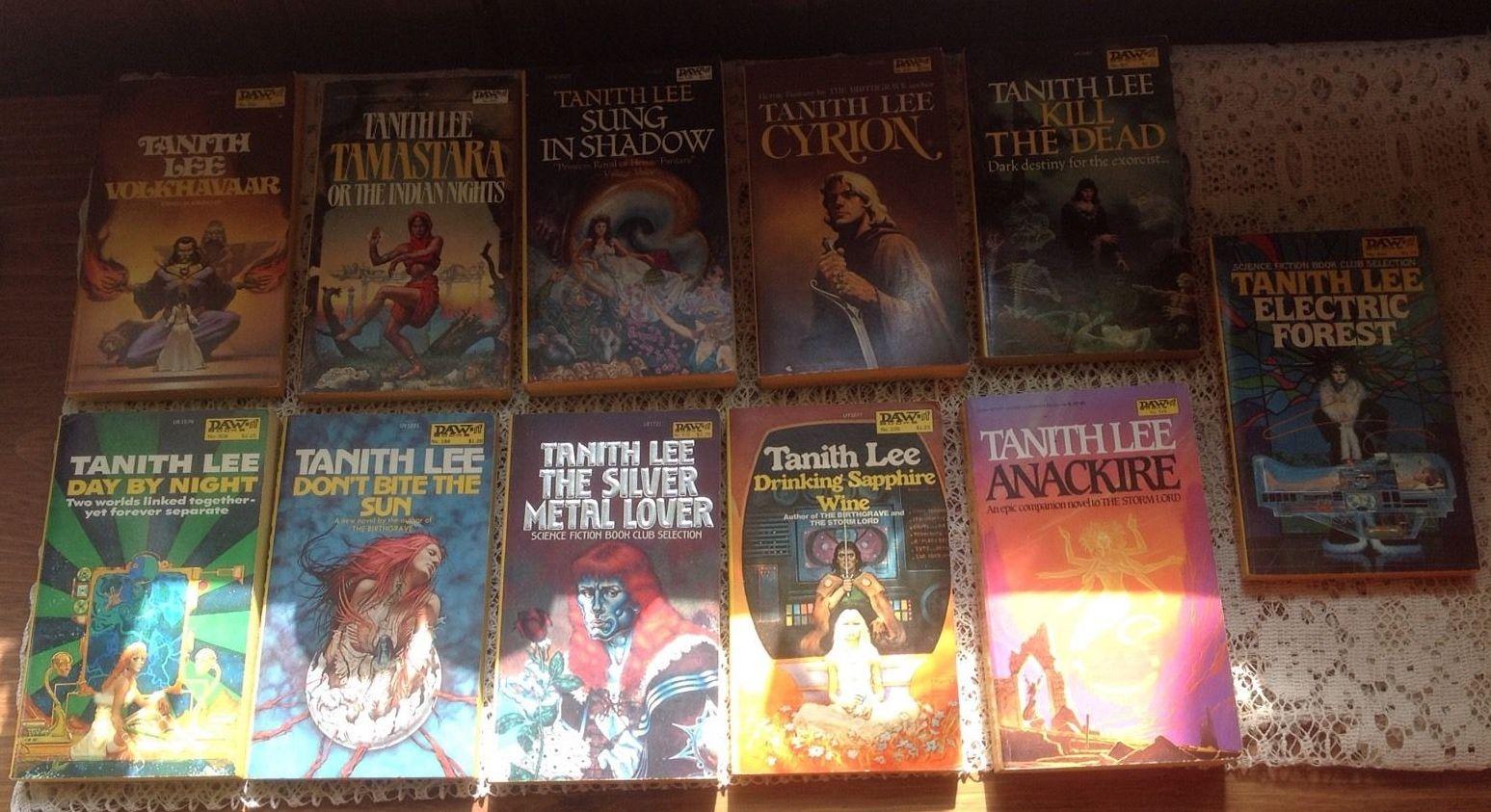 That’s less that than cover price, for books that are more than 30 years old.

> Cyrion was a good sword and sorcery collection, and had good puzzle stories.

I hadn’t realized Cyrion was a collection. I don’t have a copy, and went I went looking for one, I found that collection I mentioned to Allen above.

So I was able to nab a copy for just a few bucks — a real find, especially in such great shape. Thanks for the rec!

Just wanted to post to pay my respects to Tanith Lee and echo the sentiments of those who posted before me.

Yeah, buying used copies from resellers on Amazon or eBay is pretty much how I got most of my Tanith Lee collection.

> Just wanted to post to pay my respects to Tanith Lee and echo the sentiments of those who posted before me.

Thanks, Ape. I’m going to try and pay my respects to Ms. Lee by reading some of her novels, and covering some of her major series here over the next two weeks. If you see anything intriguing, I hope you’ll try it out.

> Yeah, buying used copies from resellers on Amazon or eBay is pretty much how I got most of my Tanith Lee collection.

Do you have a favorite?

The Flat Earth books that others have mentioned are up there, though I haven’t read them all, but I think the Secret Books series (of Paradys, of Venus) are my favorites.

But there are a ton I have that I haven’t yet read, so that should be indicated as my favorites that I’ve read so far.