A Masterwork of Transcendent High Fantasy 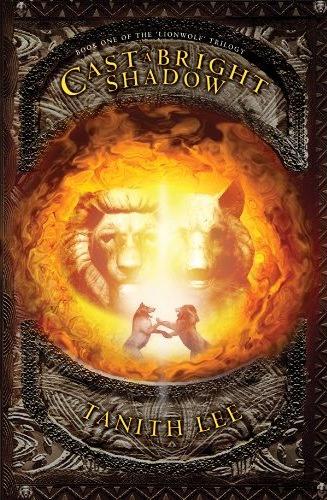 In a publishing world that does not always honor its Great Ones, it is often possible to miss out on the latest and greatest works of the field’s most gifted writers. Even a writer as established and lauded as Lee can get lost in the desperate shuffle to market and promote “hot-sellers.” Quality often takes a back seat to what the marketing department thinks will sell…and some amazing works of fantasy get less than the attention they deserve.

Case in Point: Tanith Lee’s latest masterpiece The LIONWOLF Trilogy. The series consists of three books that chronicle the birth, life, death, rebirth, and redemption of a rampaging man-god who strides red-handed across a world of endless winter and primordial savagery. The books are: Cast a Bright Shadow, Here in Cold Hell, and No Flame But Mine. Chances are you’ve missed seeing these books on your local bookstore’s shelves…which is a tragedy in and of itself. Like much of Lee’s previous work, this is a trilogy that no self-respecting fantasy fan can afford to miss. In today’s world of online booksellers — led by the grandaddy of them all, www.amazon.com — you no longer have to settle for what shows up on your local bookstore’s shelves. Thank the Gods for that…

Lee has proven herself a Master Storyteller throughout her long and distinguished career. Her imagination knows no bounds, her gift for lyrical prose is unrivalled, and her characters boil with passions that make them all-too-human (even when they’re demons, gods, ghosts, and monsters). LIONWOLF is no exception. The first book introduces the world, the characters, their history, and the strange melange of cultures that inhabit the frozen continent. Instead of recapping everything myself, here’s the official book description from Amazon:

Cast a Bright Shadow (Tor, May 2005) – “The setting is a world of eternal winter, where once thrived hot climates and exotic luxury. Saphay, daughter of a subking in the more civilised west, is sent off to marry a leader of the barbaric Jafn, not realising that her own father has arranged for her to be betrayed and abducted on her icy journey. But, escaping her pursuers on the back of a giant whale, Saphay is discovered alive — entombed in an ice-pyramid — by her intended husband, and the marriage proceeds. But, all too soon, she carries a child, causing dark suspicions regarding the infant’s true origins… And as her son grows up in wintery exile, it is soon evident that in him is emerging a hero with a very special destiny. Populated by outlandish creatures and exotic landscapes, this is a luscious, luxurious, colourful epic adventure full of the twists and turns and spellbinding imagination that only Tanith Lee can magically conjure.” 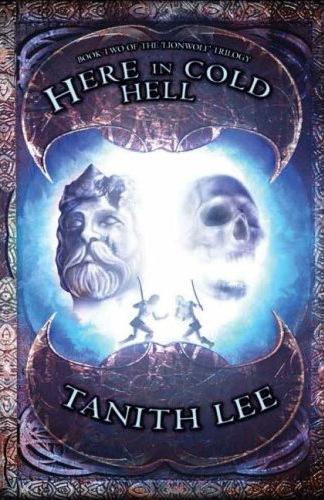 At the heart of the story is the twist on the Greek legend of the “demigod”—a half-god/half-man hero who comes to be known as Lionwolf. After growing up in exile and being mentored by a ghost, the crimson-haired godling unites the disparate barbarian tribes of the continent in a blood-mad crusade to destroy his exiled mother’s city of Ru Karismi. The mammoth mounts of the Ochibe tribesmen here are a brilliant touch, providing a neo-Stone Age vibe you don’t see often these days. Other tribes, such as the spirit-haunted Jafn, live in symbiosis with snow lions who pull their war chariots. These are fierce peoples who can only be led by an even fiercer leader—Lionwolf is the holy savage who threatens to bring civilization to a blood-soaked end. He is rage personified, blind destructive force meets godly power…a complete lack of moral vision meets apocalyptic passion.

The second book chronicles Lionwolf’s afterlife. Yes, that’s right…the main character is already dead at this point. We see him manifest deep within an indigo hell where the spirits of the dead continue their endless savagery. Again, here’s the official synopsis (from Amazon):

Here in Cold Hell (Tor, August 2005) – “Killed by the power of the god Zezeth, his true father, Lionwolf has been cast into a bleak and icy hell lit by a cold blue sun. Here he and others of the living dead must wage endless combat and war, to appease the whim of a deathly King whose face is made of stone. But when Lionwolf encounters the King’s wife, she is none other than the beautiful, god-fashioned Chillel, his own former lover — and nemesis. As Lionwolf struggles in the toils of Hell, elsewhere in the hell-cold ice-age of the mortal earth, men and women work out their own destinies. An empire has fallen. Ru Karismi, Capital of the Kings, has been abandoned to the poisons of the White Death. Reavers cross the lands of the Jafn and the Ruk, preying wherever they wish. Against this unsettled backdrop, Jemhara the sorceress determines to save the Magician Thryfe from a dire self-inflicted punishment, and Saphay, now a goddess of the far north, seeks to lead her people to a new world. And from the depths of an ice-locked sea Zezeth’s other terrifying son, the mountainous whale-leviathan Brightshade, is once more rising for vengeance.”

The characters of Thryfe and Jemhara steal much of the show in the second novel. The tormented magician and his once-forbidden love are terrific examples of Lee’s ability to blend sorcery and passion to create fantastic drama. Lionwolf’s mother, Saphay, explores her own newfound goddess-hood by playing the role of messiah to the strange northern tribes. And Lionwolf’s vast “brother” Brightshade plays a larger role in the story…here is a character so immense he can cause tidal waves just by swimming too close to the frozen shore. So colossal in his bulk that his back is nearly its own continent…yet his primal emotions are far too human as he stews in jealousy, aching for his heedless father’s attention. The brutal god Zezeth, however, cares little for his offspring, whether they be man, whale, or otherwise. Meanwhile, Lionwolf’s adventures in Hell have a transforming effect on his immortal (and irrepressible) spirit. 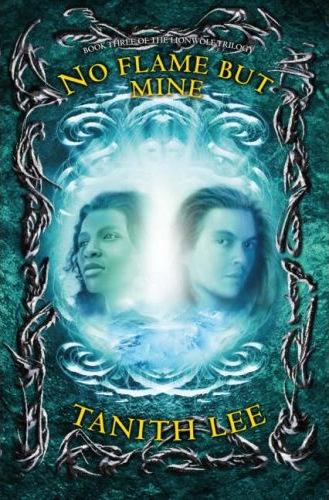 The third book chronicles Lionwolf’s rebirth…as the sorcery-spawned son of the Magician Thryfe and the Sorceress Jemhara. As you might expect, the magic/sorcery in this book is completely “off the hook”…the mystical powers Lee evokes here literally know no bounds. Lionwolf grows from boy to man in a matter of months, and now he is a very different type of god…he’s gone from a Destroyer to a Bringer of Hope. Here’s how Amazon tells it:

No Flame But Mine (Tor, August 2008) – “Searching for the beautiful witch Jemhara, the magician Thryfe at last finds her in the reinvented town of Kandexa, where a strange and passionate wooing begins. From this union a son is born — golden-skinned, red-haired, blue-eyed — and thus the Lionwolf returns to the world of men. Unaware of this birth, his original mother, the goddess Saftri has begun her own search for her lost love Athluan…while elsewhere the black and shining ones, the Children of Chillel, seek to establish claims on the ice-locked planet. Beyond, over, under all, the evil god, Zezeth rages and plans the ruin of these separate and immortal lives. Strafed by the tumult of such conflicting powers, the be-wintered realm of mortals can only wait to learn its destiny.”

The third book literally blows readers over with sheer sorcery unleashed in mass quantities. The world Lionwolf inhabits is completely prone to his magical will. He seeks an end to the eternal winter that has ruled the world for ages, as he seeks an end to pointless conflict and war—something that consumed him in his first incarnation. In a classic “shaman’s journey,” Lionwolf has been redeemed by Death Itself…transfigured by his own demise and otherworldly suffering…and reborn as a figure of light. He is now the opposite of what he used to be.

Thematically it’s very interesting that his first incarnation (as Destroyer) was born of god/human rape, while his second (as Enlightened One) is born of long-simmering love between a man and woman. You might think that once a writer takes death off the table as a potential threat to her main character, the story would lose all viability. Not in the hands of a master raconteur like Tanith Lee. Lionwolf may be a super-being who is free from all worldy suffering, but those hapless mortals he loves are still prey to all the terrible things existence has to offer. Can he succeed in redeeming the human race from its own savage tradition?

The real foil in the third book is Lionwolf’s original father, the Mad God Zezeth, who rises up now to destroy his misbegotten son. How dare his offspring seek to end the eternal winter, or bring an end to the glorious savagery of mankind? When gods battle, the stakes are so high that most writers won’t even tackle it…they’ll give you a few brief lines of “legend”…but Tanith Lee wades right into the thick of supernatural awareness, godly powers, and infinite existence. Unflinchingly, she makes us understand what it is like to be an invulnerable God walking through a world of vulnerable Men.

I haven’t even mentioned several of the sub-plots Lee works masterfully into the overarching story here. At its core, the LIONWOLF trilogy is the story of one being’s journey from savagery to enlightenment, via the medium of death…which is only a door, by the way, never an ending. A cast of compelling characters completes the vast panorama that is the backdrop for this epic journey.

LIONWOLF is not the first epic Lee has given us, and Gods willing it will not be the last. Her feats of fantasy are even more amazing when you consider that she writes ALL her novels in longhand. So she effectively writes each novel TWICE, because later she types up a second draft. In interviews she admits that planning and outlining has never been part of her methodology. She “sees” the story…it comes to her in dream-like visions. It’s an old spell that continues to work dark wonders.

“I don’t really plot; I get told,” Lee recently told Innsmouth Free Press. “Where I can’t quite make the jump, find the through line, I and they have ‘discussions’… Looked at with any kind of cool, rational objectivity, I must assume what I call my ‘backbrain’ works on the details unbeknownst to me, and then there they are. All I need do is dive in for a swim.”

There are few things as pleasing as a new Tanith Lee novel, and here are three that hearken back to the greatest fantasy works of her entire career. If you’re already a Tanith Lee fan, get your hands on the LIONWOLF Trilogy. If you’ve never read Lee’s work, this is a great place to start. (Although Norilana books is re-releasing her legendary FLAT EARTH series one book at a time, starting with the now-available NIGHT’S MASTER.)

“I’ll always come back to my basic insatiable yearning, which is, write about people,” Lee says. “They are my prime fascination.” (Innsmouth)

Budding fantasists, take heed. Even in worlds awash with mystical excess, the best stories are always about people. Is Lionwolf a man, a demon, a god, or something altogether different?

One thing’s for certain: He is one character you will never forget.

These sound great. I haven’t read as much Lee as I liked, but what little I’ve come across (shorts) has been great. Maybe it’s time I went out of my way to grab some more.

And I’d just like to add that anyone that opens a review with a quote from the Pixies commands my full respect and attention!

I’d start with either CAST A BRIGHT SHADOW, or the new edition of NIGHT’S MASTER (which was nominated for a World Fantasy Award back in the late 70s). Either way, you’re in for a wonderful journey…