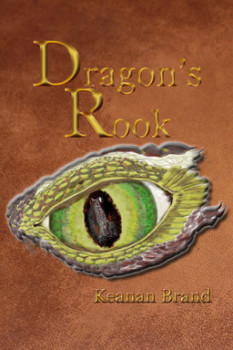 Let me start by stating that I am an inconsistent person with inconsistent tastes and opinions. I tend to get overly emphatic and dramatic when discussing things I like or dislike. In the light of what I’m about to write about Keanan Brand’s epic fantasy novel, Dragon’s Rook, I need to look back and see how many times I disparaged thick books and those set in European-styled worlds. Because that’s exactly what Brand’s book is and I really enjoyed it.

I actually like novels set in pseudo-European worlds. Tolkien, King Arthur, and much of the earliest fantasy reading I did was set in such places. The best included Lloyd Alexander’s Chronicles of Prydain and Poul Anderson’s various excursions in fantasy.

Brave farm boys, daring princesses, wise old women, and wicked kings (plus dragons!) are endemic to the fairy tales read to me by my dad. Mysterious huts in dark forests, dire castles towering over the countrysides, and dank, fetid caves were common locales for those characters’ exploits. This is good stuff that speaks deeply to me for nostalgic and cultural reasons (about 99% of my ethnic heritage originates north of the Rhine River) and it all makes its way into Brand’s novel.

It’s just that often I feel like it has been done to death. Prior to the late 1970s, fantasy was a pretty diverse field. While Tolkien loomed above the genre, he spawned few direct imitators. In the first part of the decade, fantasy writing was all over the place. Sure, there was plenty of swords & sorcery, but there was also Roger Zelazany’s wild romp, The Chronicles of Amber, Ursula K. LeGuin’s very non-European Earthsea trilogy, and Tanith Lee’s phatasmagorical Tales from the Flat Earth (books I need to reread and review).

And then came Terry Brook’s The Sword of Shannara. For the unitiated, many of Shannara‘s events parallel those of the Lord of the Rings closely, and it was a monster success. That was enough to convince publishers and authors that the key to sales lay in the same sort of mimicry. In the years that followed, dozens of quest stories set in very familiar Euro-style worlds appeared. The worst were slavish imitations of Tolkien’s masterpiece, while the best took advantage of the familiarity of quest and fantasy tropes and used them to explore original ideas. Either way, though, Dark Ages and Medieval Europe came to be the default setting for fantasy fiction.

This is a long-winded way of saying that I gravitate toward books using different or made up settings and cultures (see Milton Davis’ use of all sorts of African backgrounds or Adrian Cole’s Voidal stories). In my reviews I’m always pointing out the authors who have looked for something different than the same old worlds and cultures I’ve been reading about for forty years. My enthusiasm for different has made me too quick to dismiss the familiar.

I also frown on most doorstopper books. Too often they get lost in superfluous side plots and are littered with characters that serve as distractions from the major protagonists and plot. How many books really need to be longer than War and Peace?

A few weeks ago, I was asked by an editor I respect if I was interested in reviewing a friend’s self-published novel entitled Dragon’s Rook. On my affirmative reply I received a monster of over 500 pages and, I admit, my heart groaned a little at that. Did I really want to read something so long, especially given my biases, without any clue to what it was about?

So for all my gripes, worries, and prejudices, it serves me right that it’s a good story and written well (those don’t always coincide). There’s a sequel coming out next year that I suspect will be just as long and I know I’ll have to carve out the time to read it. 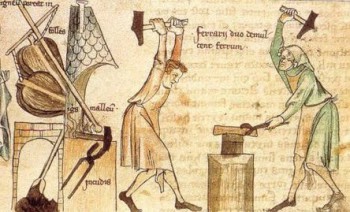 Dragon’s Rook opens in a village with the arrival of a young boy named D’urnythn. He is in shock and his traveling companion is dead from wounds. The villagers realize the boy is a Kel, whom, we later learn, were the ancient rulers of the lands. An effort to restore the Kels to the throne has sparked a war that marks D’urnythnn for death in this region, but the village blacksmith takes him in and renames him Kieran.

Jumping forward a decade or so, the action switches to the battle between the armies of Disson and Skarda. They are struggling over the Territories, rich lands unbeholden to either kingdom. Disson, aided by the powerful Healers, has come to protect the Territories. Morfan, king of Skarda, has come to conquer them. He is aided by the sorcerer Heolstor and his followers, the Black Hoods, who have trapped young dragons and bound them to their will.

It is during these early chapters Brand introduces Captain Gaerbith. He is the champion soldier of Disson and believed to be touched with magic, rendering him nigh invincible in battle.

Gaerbith ran at the Young Wolf, and as he ran, drew back the longsword over his left shoulder and swung it down, catching the man below the ribs. Propelled by momentum, by the force of the swing and the weight of the sword — and by something other — the blade broke the links of mail, sliced through the leather jerkin underneath, scraped across bone, and tore free just above the right hip, slinging a crimson arc. Divided at the waist, the Wolf toppled in two.

For the first half of the book Brand sets a leisurely pace. Along with Gaerbith, we meet the adult Kieran, now the village smith; in the dangerous corridors and chambers of Morfan’s castle we meet his daughter, the princess Yanamari, who is plotting her escape; then there is Maggie Finney, a young woman with a crippled hand who arrived in Kieran’s village under mysterious circumstances, and whom many call a witch.

We are also introduced to the greater history of Dragon’s Rook‘s world and the arc of the story. Millenia ago, dragons ravaged the world. One young warrior, Kel, discovered that a sword forged of etherium could pierce a dragon’s armor. Over time he drove the dragons out of the world, and he and his heirs ruled in peace and justice for a thousand years. But one of his descendants fell into evil ways and was overthrown, and the surviving members of the family scattered. Kieran is the heir to the throne of Kel and for two thousand years the dragons have longed for revenge on his family.

I appreciate the time Brand took to explore her characters and put them on display. By book’s end, Kieran the hidden-king and Yanamari the bold princess had become more than archetypes. They attained depth and personality. The same goes for Gaerbith and Maggie. Morfan, on the other hand, becomes more despicable and evil. Not a nuanced villain, but definitely a memorable one.

Once the tempo picks up Brand gets to show off her action-scene chops, and they are not lacking. The escape from Morfan’s castle is a real nailbiter. Wolves and wizards bear down on the heroes. There are several exciting battles between Gaerbith’s soldiers and the king’s. There’s a fight between a golden dragon and a silver one that’s an absolute blast, leading to my favorite single image in the book.

The cry was taken up all along the line, but there was little shelter to protect the soldiers. The Dissonay rarely wore helms, and few of them fought with shields, for longswords were wielded with two hands. Even if there was something to hold over their heads or cover their bodies, there was no defense against the consuming fire.

More blood rained down in scattered drops. Silver produced shoots of green grass or succulent vines, buds of wildflowers or nascent trunks of trees. From the gold, fire withered the sudden new growh or charred the stones, even licked up the dust.

So, yeah, I like Dragon’s Rook a lot. I was very happy to get my prejudices tossed back at me and be reminded that it’s not the traditional trappings of fantasy that are boring, it’s what authors choose to do with them that’s boring. Brand has a big story she’s telling and has it under control, never letting the side events overwhelm the major ones.

I also like that there are good guys and bad guys. I’ve started working my way through some of the more prominent grimdark books lately, and I gotta say — it gets a little overwhelming. In my experience, there really are some good people and heroes out there. Not all the time, but much of the time. Brand doesn’t approach this simplistically, but she does recognize that sometimes there really are heroes and villains.

My biggest complaint about the book is a purely stylistic one. Most of the Dissonay characters have Celtic-sounding names and most of the Skardians more Germanic ones. In both cases they’re slightly exotic. Suddenly, when we meet the citizens of Kieran’s village, they have standard contemporary ones: Harry, Connor, Donovan, etc. I found it jarring and I never quite accepted them.

I strongly recommend a map and list of characters be included in the book. The map not just because I love maps, but if you’re going to bounce characters around the world it’s nice to be able to see where they’re going. As for the list, once you add in all the minor characters, there’re a lot of people in Dragon’s Rook and there were times, especially early on, where it took a few pages to remember who someone was.

Those are minor quibbles about a solid work of epic fantasy. Brand writes in a smooth style that never dragged or made me wish I was reading something better. She has a real feel and understanding about what makes her characters tick, and there’s an intimacy to them I like.

The best thing about a cheap, well-reviewed e-book (and Dragon’s Rook can be had for the low price of $4.99): it’s like it’s daring you to take a chance and read it. And I’m going to do the same thing. If you have any liking for well-done epic fantasy, I dare you to take a gamble on this one. I don’t think you’ll be disappointed.