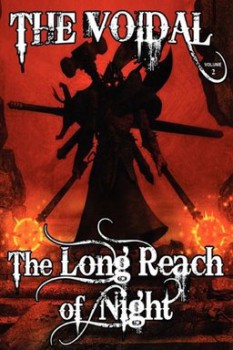 Last year I reviewed (quite favorably, after an initial aversion to it) The Oblivion Hand (2001), the first collection of Adrian Cole’s stories about the Voidal. To say they’re excessive, over the top, and incredibly phatasmagorical barely does them justice. They are all those things and much more. These traits are carried over into the second volume, The Long Reach of Night (2011), an even better book than the first.

The Voidal is a man, cast out by the Dark Gods onto the currents of the Omniverse as punishment for some unknown sin. He has been stripped not only of his memory but also of his right hand, which has been replaced with the Oblivion Hand — a sentient-seeming thing that carries out the will of his tormentors. The Voidal is endlessly tossed about parallel dimensions and planets of the Omniverse, wholly against his will, a scourge in servitude to some celestial tribunal.

By the end of The Oblivion Hand the Voidal had acquired an associate, the froggy familiar, Elfloq. Together they set out on a search, from one hellish locale to another, for how to restore the Voidal’s lost memories and free him from the control of the Dark Gods.

Like its predecessor, The Long Reach of Night is a fix-up. Two of the stories appeared in magazines previously, but the rest appear here for the first time.

It is Elfloq who is the real protagonist of this book. For much of the time, the Voidal is lost somewhere in the aether. In each story the familiar is forced to hunt for clues to where his master is, ever formulating a plan to get one step closer to their goals.

Sometimes Elfloq is forced to undertake some dangerous task in exchange for information. In the first story, “The Preposterous Library,” he must travel through the pages of a book entitled The Skullworks to a pocket world of the same name.

Effelgung, although generally reluctant to name names or to divulge secrets of any kind, nevertheless provided Elfloq with a genral working knowledge of the world of The Skullworks. It was, said the Librarian, a world within a world, the enormous head of a former magician, who had learned far too much for his own good. He had offended the gods to the extent that they beheaded him, distributed his body throughout the Nine Hells of Snarlwake, a particularly obnoxious underworld, and locked his skull away in its own private hell. Within this hell, the Skullworks, numerous imps and vagabonds toiled at mining the lost memories and knowledge of the extinct magician, preserving and cataloguing them.

Once there, the familiar needs to track down the very dangerous Laughing Facemaker (“the offspring of a human father and a demon mother, a wicked hybrid with diabolical powers. Transmogrification, shape-shifting and so on”), trap him in another book, and bring the prisoner back to Effelgung.

That sort of craziness is on display in every story in The Long Reach of Night. If that’s the sort of fantasy that puts you off then it’s best to avoid the Voidal. But if it’s up your alley, if it’s the sort of stuff that appeals to the Frazetta-loving side of you, then snatch these books up at once. 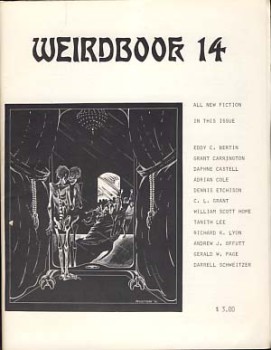 Cole doesn’t unremittingly operate at eleven. When needs be, he’s quiet, as in the “The Exile of Earthendale.” Traveling the astral plane in search of the Voidal, Elfloq is drawn to investigate sorrowful cries he hears rising from a beautiful world of mountains and forests. There a dying sea sprite, drawn to the world by love, mourns the ocean of the homeworld he longs to see one last time:

“Before I die, there is one burning dream I must fulfill. I must go back to Mare Serenis. I must stand one last time upon her whispering shores. I must go down to the laughing waters and feel their silken touch, their goodness, and pray to the sea mother to be remembered, for I do not expect forgiveness.”

And not all the descriptions are grotesque. In “The Thief of Thieves,” Elfloq and the Voidal travel vast interstellar gulfs in a great, living craft:

Elfloq watched the ship come in from a tall spire. It was the most remarkable vessel he had ever seen, if vessel were the correct word to use, for it was nothing less than a living creature. Not a Snapwing from the Universe of Islands, nor one of the more common whippersails, this was a beautiful gliderorchid, a hundred feet long with bright green skin and two huge, purple wings that scarcely seemed to beat as they rippled with the invisible thermal currents of this inner world. Long ago the gliderorchids had been all vegetable, loosening their seeds that floated on the air, but they had evolved to become more animal-like, with an enhanced intelligence. Now they could take on the appearance of a huge bloom, or use their exotic wings to tug them across the skies like giant aviators.

This is fantasy that exploits the genre’s freedom in the best possible ways. Why keep working the same medieval mines when you can do whatever you want? Cole’s apparent answer is, “why indeed?,” and he runs as far and as fast as he can in any direction he can conceive.

One major difference between The Long Reach of Night and The Oblivion Hand is in the characters. The Voidal spends most of the first book being moved about like a chess piece, never understanding why or where he’s going. His amnesia makes him a blank with little personality. The appearance of Elfloq introduces a more interesting character driven by his own motives and goals. 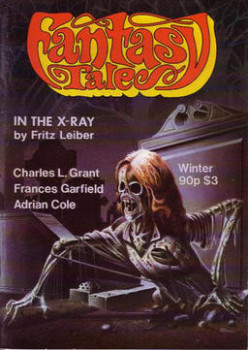 In The Long Reach of Night Elfloq takes center stage and he’s a lot of fun. While devious and willing to mislead even the Voidal, he does it all to help his master gain his freedom. Despite his roguishness, he proves loyal and even occasionally noble.

The Voidal himself becomes more real, too, instead of just a murderous plot-device. Aided by his new sidekick, he becomes more focused and hopeful. He makes a little movement toward self-determination, struggling with limited success to make his life his own, not the Dark Gods’. “The Burning Ice, the Freezing Fire” even provides him a little love story.

There’s plenty of terrific technicolor action if that’s what you’re looking for. In “The March of the Damned” Elfloq and the Voidal face off against the demonic warrior, Ugnarg the Supreme Iconoclast and his planet-shattering device, the Slaughterer, the Man-Weapon. In “On Murderers’ Mountain” they help the smith of the gods face off against an angry war goddess and thousands of damned killers. Moons explode, hordes fall to the power of the dark Oblivion Hand, and blood and gore drips from the mountaintops.

I’ve come a long way from my initial reluctance to give in and enjoy these stories (and others like them). I definitely appreciate a serious and literary fantasy story but, come on, S&S is supposed to be fun and that’s exactly what Adrian Cole’s Voidal stories are. Sure, there are touches of darkness and even some moments of real emotion in The Long Reach of Night, but mostly it’s fun! The sort that drags you by the collar into places of dreams and nightmares; where beams of magic lance the night and Dark Gods move an unwilling emissary around in order to mete out final and absolute justice.

After reading and digging The Long Reach of Night as much as I do, I don’t think I’ll be waiting to read the third and final book in the series. It’s called The Sword of Shadows, and like the first two, it’s available from the great people at Wildside Press.

I read all three books a few years back when they became available from Wildside. (Before that, they were a mythic beast — I had read, & really liked, one Voidal story in Page & Reinhardt’s anthology Heroic Fantasy from DAW, and was led to believe that further books existed, but could never lay hands on them.) They weren’t great literature, but I liked the cross-dimensional scope of everything — they didn’t feel nearly as constrained as a lot of other fantasy I’ve read over the years.

@Joe H – and that’s exactly what I hope I conveyed in the review – These are good, crazy fun. Nope, they won’t change anybody’s world, but they will remind the only limitation in fantasy is the author’s imagination.

[…] For a series I have already called favorably “a study in sensory overload,” and “excessive, over the top, and incredibly phatasmagorical,” author Adrian Cole ends things as madly and wildly as a reader could […]