While my appearance on these pages has been rather sporadic of late, regular readers of Black Gate will have noted the debut of a new BG blogger, Gabe Dybing, who has been doing some filling in for my weekly slot. I had intended to give him a formal introduction at the start of the new year, but instead we just had him jump right in, and he hit the ground running with a series of reflections on Leiberian Sword & Sorcery. Now that you all know him and an introduction at this point would be superfluous, let me instead announce that he is moving from pinch hitter to starting line-up beginning this Wednesday. Welcome to the roster, Gabe!

Meantime, I have been busy setting up my Inner Sanctum (also sometimes referred to as The Dungeon, since it is in my basement). Gabe has been visiting my rural abode about once a month lately, so he has seen it go from a musty room full of unpacked boxes to a slightly less musty museum and workspace housing my collection of vintage toys, games, books, and comics. It’s not exactly the Ackermansion — but it could pass for a room in the Ackermansion!

Some folks have expressed curiosity about what my collection looks like, and while these pictures represent only a fraction of it, I thought I’d share a few here (click on pics for larger versions — you’ll need to in order to spot all the toys and pop-cult ephemera), as well as slipping in a shameless plug for the business side of this venture.

A collector has to support his hobby, oftentimes by selling parts of his collection (also to pay for things like food and stuff), so this past month I officially opened my own eBay storefront, joyously branded Raiders of the Lost Toy Box. (You can visit it HERE).

If you check out my eBay presence, do be sure to visit my Collection “A Gen X Childhood”: it’s an ever-expanding compilation of some of my favorite toys growing up in the late ‘70s and early ‘80s (most of them, as you might easily infer, involved monsters, robots, dinosaurs, and aliens). For many of you of the same generation, it will be a fun trip in the nostalgia ship. (Oh, and John: I’ll be posting some vintage lots of sci-fi and fantasy paperbacks over the next week or two, so I know you’ll want to keep any eye out for those!)

Now that Gabe is moving to his own new timeslot, I’ll be back here just about every Monday, writing to you from the Inner Sanctum surrounded by all these marvelous things. I have quite a backlog of books I’ve finished and films I’ve watched that I’d like to review, so we’ll just have to see what pushes its way to the head of the pack.

And thanks again, Gabe, for tagging me out long enough for me to get some of these boxes unpacked. Now tag me back in — I’m ready to rumble! 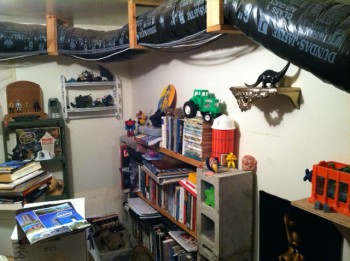 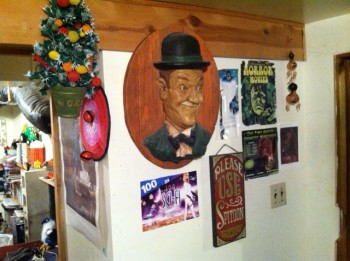 1. Pinch hitting and starting line up, unless you are counting hitting the ground running or are you ready to rumble.
2. Forrest J. Ackerman was known for his fantastic sci-fi book collection. What would I not give to spend a night there? I think anything short of a hot date with Scarlet Johanson would be a no deal and since that ain’t gonna happen….as long as I didn’t have to severely violate any morality laws…publically or on camera.
3. Gen Xers are like the X-Men, therefore inheritantly cool. Millenials are spoiled crybabies who secret fawn over Justin Bieber. C’mon, you know it’s true.
4. My Cornilius “action figure” from Planet of the Apes fame. It has been totally been taken out of the box and sent on combat missions with my GI Joe out in the desert. (By the way, my sister’s Barbie looks great in a GI Joe jungle fatigues, kinda looks like pajamas on her–something about chicks and guns that is hot). Cornilius isn’t for sale unless I can get into the AckerMansion.
5.Dames,who can understand them? If they have guns or a broadsword (no pun intended) who cares? They are easy on the eyes.

OK, I found the Black Hole figure, but I think I’d need a larger version of the picture to find stuff from Flash/Clash.

I also recognize the little wind-up dome-headed robot — used to have at least one of those, although it might’ve been a different color scheme.

As far as toys, I would give, well, someone else’s left arm for a mint-in-box set of Micronauts; ditto for mint-in-box copies of the LEGO space sets I used to have. (The ones with the red & white astronauts — I had a big ship and a missile base.)

Thanks for the nice send off, Nick! Going great with your Raiders of the Lost Toy Box, I thought I had a few Raiders of the Lost Ark action figures – Indy, and Toht and Belloq in Ceremonial Garb, but last time I looked I couldn’t find them. Maybe I hid them from myself.

But I also have an old Donatello Turtle figure, and the original Optimus Prime.

They’re not for sale, even if I do find them.

1. You nailed all the metaphors (even one I didn’t think of, “hit the ground running” — what exactly does that phrase come from, anyway?), but you didn’t say which sports! The first couple you mentioned, which I lump together as one extended metaphor, is of course baseball. The other one I was thinking of is “ready to rumble.” If you grew up in the ’70s and ’80s watching a particular “sport” (used loosely), you’ll be able to hear “Let’s get reeeeady to rumble” clearly in your head.

2. How about a night in the Ackermansion with Scarlet Johansson?

4. Planet of the Apes figures and tie-in products from the ’60s and ’70s have consistently remained a hot commodity. Last summer I found a 1968 PotA waste basket at a garage sale for a buck and sold it for $30.

Did you click on the pic? A larger version should appear. For a hint on the Flash and Clash figures: Look to Sesame Street. That block has had some strange characters moving in to the upstairs apartments — and I ain’t talkin’ about Bert and Ernie.

Ah yes, the 1970s Tomy windup robot. I had one as a kid too — I think he must’ve been pretty ubiquitous in toy boxes across the land. Of course, the trick is finding one that still works — you know how you’d overwind it, and then there was no fixing it. That one in the pic, by the way, works great. I haven’t overwound him yet. Sooner or later one of my kids will get ahold of him, and then it’s all over.

The original red and white Lego astronauts! That brings me back. Yep, a left arm is about what they’d cost mint in box. Ditto for the Micronauts.

I had the first generation Optimus Prime too — and the guy that turned into a radio cassette player. I think he even had a cassette that transformed into another little robot (talk about being dated now. Millennials would transform that one and go “So, what — he transforms into a flat rectangular box?” I guess with a little customizing, you could say he was a smartphone).

Transformers were pretty rad toys. Unfortunately, they hit just on the cusp of when I was turning “too old to play with toys.” It would be another 30 years before I had an excuse to play with them again.

Yep, I went to the larger version. And I do see Clash now. Still missing Flash, but that might just be because I’m not as familiar with the cartoon. (I did get the DVD release a few years ago, and watched it; the first season was really good, but the second season was … not.)

I don’t really have any toys left over from my childhood. Well, a box of mostly-broken Micronauts debris, but that’s about it. The tops of my bookshelves are festooned with Star Wars LEGO sets, but they’re all much more recent acquisitions …

A great set of pics! I’m jealous of your toy collection, especially your CLASH OF THE TITANS action figures. I’ll have to visit your inner sanctum in person some day soon.

Oh — and thanks for the tip on your upcoming eBay paperback lots! I’m warming up my bidding finger now…

You’re welcome to visit the Inner Sanctum any time you happen to find yourself in southern Minnesota!

I’d love to have any BG friends drop by — what good is a collection if there’s no one to show it off to?

P.S. The Clash Calibos figure leering from an upstairs window of the Sesame Street building does have his tail (I hope that isn’t Bert and Ernie’s room; maybe it’s Elmo’s). Many of the ones that crop up on eBay have lost their tail. Ditto for the Flash Lizard Woman and the Battlestar Galactica daggit Muffit. Yep, my collection has lots of tails.

(Speaking of cartoon series from back in the day, did you ever watch the Tarzan of that era?)

I actually don’t remember ever watching the Flash cartoon, but I did have a number of the tie-in figures (my favorite was the Lizard Woman).

I can’t recall the Tarzan cartoon (which is surprising, because my dad and grandad were big Burroughs fans and got me reading ERB young, around the third grade).

I wonder what company produced it? My Saturday morning cartoon memories of that era are dominated by Hanna-Barbera offerings: The Herculoids, Captain Caveman, Speed Buggy, Johnny Quest, Space Ghost, and that one with four kids and a dog solving mysteries and unmasking monsters…

Later, I remember watching Spider-Man and Friends, Transformers, Galaxy Rangers, Dungeons & Dragons (a disappointment to me at the time — I’d started playing D&D, and the cartoon was, of course, a watered-down kiddie-cartoon version of that world). He-Man, which was always on just when I got home from school.

[rushes off to Google] — it was Tarzan, Lord of the Jungle from Filmation (I think they also did the Star Trek animated series). It was actually a reasonably faithful adaptation, at least per IMDB — at this point, the only thing I actually remember is that the water in the rivers was particularly well-animated. Here’s the title sequence:

I remember watching most of the same shows you listed, plus Thundarr, which remains my favorite to this day.

The Flash Gordon cartoon is worth checking out; at least the first season, when they were actually doing a relatively serious take on things and having the story arc across multiple episodes. The second season was frankly terrible — they introduced a pink baby dragon and started doing two 12-minute standalone stories per episode.

Wow, it sounds like Flash must’ve had a new show-runner step in between seasons and decide it needed to be “dumbed down” for kids. That’s infuriating.

I remember Thundarr only vaguely. I somehow never caught the Star Trek cartoons, but had a lot of the tie-in products: the coloring books I especially remember.