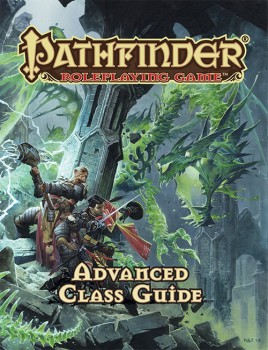 Every year, one of the most enjoyable booths to attend at GenCon is the Paizo booth. And I’m certainly not alone in that belief. Last year, the massive rush at Paizo to get copies of the Pathfinder Adventure Card Game: Rise of the Runelords base set (more on this later) resulted in a line that snaked its away across a massive section of the Exhibit Hall. This year, they had to actually have a line out in the hallway to even be admitted into the booth, to avoid cluttering up the Exhibit Hall itself with all the desperate Pathfinder fans. And there were certainly a lot of great products to inspire a spending frenzy this year.

The flagship product coming from Paizo Publishing is the Pathfinder Roleplaying Game. Pathfinder always has a ton of great releases coming out on an extremely aggressive schedule – a range of adventure modules, player companion supplements, campaign setting supplements, and so on – but here are some main hardcover rulebooks slated for the next few months that are of particular interest to anyone who plays Pathfinder.

This new book provides details on 10 new hybrid classes, which are designed to meld together traits from two of the core and base classes from previous supplements. For example, the hunter is a hybrid of the ranger and druid, a martial character who is able to channel animal powers and bond more closely with their animal companion, but still wield spells. The bloodrager mixes the combat features of the barbarian with the mystical bloodlines of the sorcerer. The brawler is a fighter who gains several of the unarmed combat benefits of the monk, but without the spiritual aspects.

In addition, each class comes with several pages of archetypes to create variants of the classes, and variants for all the existing classes that allow them to begin incorporating some of the new features, such as the warpriest’s “fervor” ability that allows them to cast buff spells on themselves as a swift action. There are chapters with new feats, spells, and magical items built around the new mechanics and class options.

Finally, the book ends with a chapter describing Paizo’s general philosophy on designing classes. For the real hardcore gamer, this sort of glimpse under the hood is extremely valuable. 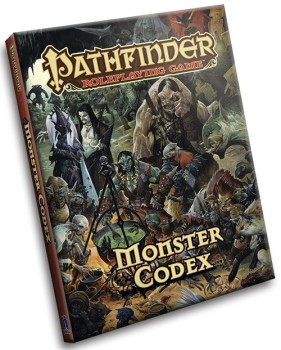 This upcoming book is a deep dive into 20 different monsters, detailing their societies and ecologies, new feats and magic items, class options for the monsters, and 10 stat blocks showing different types of monsters to populate entire villages or tribes of monsters, so that heroes aren’t constantly fighting the exact same creature over and over. The monsters that will be covered in the Monster Codex are: boggard, bugbear, drow, duergar, fire giant, frost giant, ghoul, gnoll, goblin, hobgoblin, kobold, lizardfolk, ogre, orc, ratfolk, sahuagin, serpentfolk, troglodyte, troll, and vampire.

What sort of things can we expect from the Monster Codex? Why should you pre-order it? Well, according to my sources, I have just three words for you: Goblin Vulture Rider.

This book is built to be something of a hardcover mentor, walking new (or experienced) players through different character options. From building a character that you’ll find engaging to handling complex game systems like combat mechanics to tips on surviving a dungeon crawl. It’ll be interesting to see what is covered in this book. I can’t imagine that it’s going to be a “must have” book, but will definitely be useful for new people coming to the game … or for the real die-hard gamer who must know everything about how to run a game.

The major Pathfinder book in the spring is something of a new look at their system, where the designers look at how they would build their mechanics if they hadn’t designed it upon the structure of Dungeons & Dragons v3.5. There are revised versions of various classes, new conflict resolution systems, and so on.

Finally, Paizo announced on Saturday that next year they will be releasing a book that focuses on new types of powers that are not strictly magical in nature. In a brief conversation about it with publisher Erik Mona, he made it sound like this book will not exactly be a Pathfinder rehash of psionic rules, but going in something of a different direction. If you’ve seen the Occult Mysteries supplement (Amazon, Paizo), my guess is that these rules related to astrology and numerology and such may be hints at what they’re going to implement in the new sourcebook.

Another good reason to stop by the Paizo booth each year is to chat with the writers from the Pathfinder Tales series of novels. In addition to Black Gate‘s very own Howard Andrew Jones (no relation), author of the Pathfinder Tales novels Plague of Shadows (Amazon, Paizo) and Stalking the Beast (Amazon, Paizo), I had a great conversation with James L. Sutter, the author of Death’s Heretic and The Redemption Engine, both of which I’ve reviewed on the site. If you can’t hang out with these two guys at GenCon, then I do recommend that you read their books as the next best thing.

The newest novel in the Pathfinder Tales line is Tim Pratt’s Reign of Stars (Amazon, Paizo), set in the superscientific realm of Numeria, where the mysterious Technic League tries to understand the technology that has fallen from the sky. A number of recent Pathfinder supplements – including their current Iron Gods Adventure Path – are built around this aspect of the Pathfinder setting, which is nice for those who want to have robots and advanced technology incorporated into a fantasy adventure game. 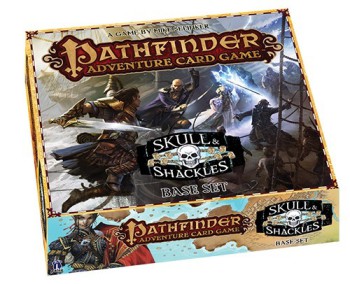 One of my favorite games from last year is the Pathfinder Adventure Card Game. The original game was built around the Rise of the Runelords adventure path. It’s a co-operative card game that has the feel of a roleplaying game, and options for either group or solo play, which makes it very versatile. If you are at a point in your life where you don’t have a ton of time to plan out a traditional roleplaying game session or campaign, but need to get your roleplaying game fix, this would be my top fix to scratch that itch.

This year at GenCon were three major developments related to the Pathfinder Adventure Card Game:

Skull & Shackles Base Game (Paizo) – This second game was released at GenCon and is now on backorder, but it looks great. It follows the same basic design as the original boxed set – you explore locations trying to defeat the main villain before time runs out – but is built around the pirate-themed Skull & Shackles adventure path. One new mechanic introduced in this version of the game is that it includes Fleet and Ship cards, so it will definitely be interesting to see how that works. I watched some games being played but didn’t run through a full demo myself, so I’ll have to wait until it comes in on backorder to get the new game.

Adventure Card Game Organized Play (Paizo) – This new organized play society allows you to buy class decks, which provide a variety of options for different characters built around existing class options. You can register for the organized play and then arrive with your deck at sanctioned events. Honestly, I haven’t personally participated in organized play of this type before, so I don’t know a ton about how it works, but the game is designed so that I can easily see them releasing customized Adventure & Scenario combinations for organized play.

Upcoming iPad App – Finally, Paizo announced that they were partnering with Obsidian to develop an iPad app (and possibly Android apps in the future). They had a demo table set up at the convention and I’ve got to say that the app looked pretty sweet, and really captured the mechanics of the card game in a very slick way. Unfortunately, in discussions with the developers, it looks like my prehistoric first generation iPad will not be able to handle the game. But who knows, maybe the fates will find a way to get me a new iPad before the game comes along … which is slated to be later this year. Possibly December, the Obsidian reps indicated.

Disclaimer: Review copy of Pathfinder Advanced Class Guide was provided by the publisher. Thanks to Paizo Lead Designer Jason Bulmahn for taking time to meet with me at GenCon.

The Rise of the Runelords Card Game is one of my all time favorites board/card games. Just an excellent game.

I was a beta tester for Skull and Shackles. My group was disappointed enough that we didn’t finish the beta and I’m not buying it. We found the ship rules were troublesome and not fun.

I’m a huge Pathfinder fan, but I think they went in the wrong direction with Skull and Shackles.

Hoping the next iteration (getting ready to beta test) is more like RotR.