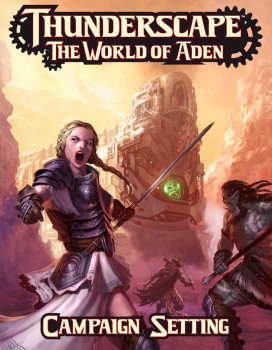 This year marks my sixth year of attending GenCon to represent Black Gate, and one thing that I always enjoy is finding some more esoteric, outside-the-mainstream games to suggest to people.

I definitely have some solid booths I attend every year — Paizo, Wizards of the Coast, Privateer Press, Cryptozoic, and so on — but those are generally games that people will hear of through normal advertising and marketing channels. If I can shed some light on a game that’s being overlooked or is just starting up, well, that’s the sort of thing that Black Gate was really built to do.

With that in mind, I’m going to start my GenCon coverage by discussing some of the less well-known games and publishers that I came across this year, but which have new and upcoming games that might be of interest. I’ll cover the big guys over the next few days, but I definitely want to get the word out on these as soon as possible.

A lot of these games are so new they aren’t even available for purchase online yet, but I’ll provide information as they become available.

Thunderscape: The World of Aden

Imagine a fantasy world in which technology has been developed and merged with magic, combining arcane magic, steam power, and gunpowder into a new domain called “mechamagic.” Then imagine that the sun is blotted out for a moment, springing unimaginable horrors on the world and spreading chaos across the land. It is a magical, post-apocalyptic realm … but ten years after the Darkfall, the people have not lost, have not given up hope. They continue to use their power and their ingenuity to fight against the nightmares that have decimated their civilization.

This is the world described in Thunderscape: The World of Aden, successfully Kickstarted in April 2013. The setting was introduced in a 1995 PC video game, then in a trilogy of novels and some game modules from West End Games. This newest incarnation of the game is  built upon the Pathfinder RPG system, but as they explained to me, the manual includes some rework of some rule systems. For example, the Pathfinder rules for firearms are built on the idea that guns are fairly rare, and Thunderscape has completely reworked them. They’ve also introduced new classes, such as the insect-controlling Entomancer, magical cyborg warriors called Golemoids, and the sorcerous artificer Mechamages.

At GenCon, they had some hardcopies of the main book and had created some Print-on-Demand copies of some of the supplements as well. These are impressive, slick-looking books, and I think the setting has a lot of potential. Definitely looking forward to getting the opportunity to explore their system and setting in greater depth.

To get the game right now, the best bet is to get PDFs through DriveThruRPG: 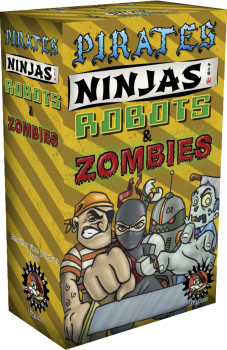 This game is produced by Rather Dashing Games, which caught my eye last year with the fantasy crafting themed board game Dwarven Miner (Amazon).

Their newest offering is a tile-movement game which contain 58 oversized tiles that are connected together to build domains to answer the eternal question of which is more powerful: pirates, ninjas, robots, or zombies. On each turn, the players have the option to either place a tile from their hand into the play area or move a tile that has already been placed into a new location. But beware, because each of these villainous groups have arch-enemies – such as the kraken for pirates! – that can reduce points if you get too close to them. If you’re looking or a good tactical game with a straightforward set of rules, this is definitely something to look into.

With the popularity of The Walking Dead, it’s not surprising that zombie games are all the rage. One of the roleplaying games that rode the wave of zombie survival love is Outbreak: Undead from Hunters Books. It is built around a percentile-based game system, which allows for a lot of growth and modifiers for those who want to delve into the numbers. One other intriguing aspect of the game is that the creators have designed the Strength, Perception, Empathy, Will (i.e. S.P.E.W.) AI survey, which allows you to create a character for Outbreak: Undead that is designed on the actual player’s personality traits. (Outbreak: Undead is available on DriveThruRPG.)

The creators of that game created a module for zombies in space … but then decided that the concept warranted a more complete exploration in a full book of its own. Out of this came a Kickstarter for a deep space horror survival game, Outbreak: Deep Space. The Kickstarter was funded back in June and they had copies of the game at GenCon … though not many, because they’d pretty much sold out just before arriving. The game is designed around a lot of different space horror scenarios, ranging from infestations (zombies in space) to outright invasions to trans-dimensional terror. In addition, the game has a modular technology system that allows for highly customizable equipment. The system seems like it has a lot going for it. This is a theme that I’ve seen explored in several war games, but it’s a lot more rare to have a full-fledged role-playing game designed around the concept, so it’s definitely worth a look.

Some games are not designed with the beginning gamer in mind, and I think that Alien Uprising probably falls in that category. There’s a lot going on in this alien invasion war board game. As you can see in the rulebook (available as PDF), there are several phases and cycles of play that will throw off many casual gamers. But for those who want to delve deeply into a new board game with an alien combat theme and a lot of cool miniatures, this would be a good game to look into. From what I can tell, it just released at GenCon, so at the time of this writing they haven’t even updated their own online store to accept orders. The game also comes with a number of modular expansions, allowing you to buy more components to add to the game to suit your style of play. 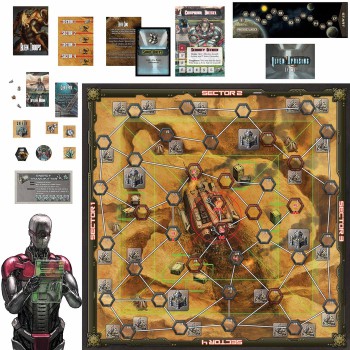 Great report, Andrew. Glad to see some new life for THUNDERSCAPE! I was a fan of the SSI computer role playing game from 1995 (and its almost unknown sequel, Entomorph). Both games were flops for SSI, but their setting was original and a lot of fun.

Great to see it back again.

I like that you covered Alien Uprising. That game has the unfortunate time of being announced right when Fantasy Flight Games announced the X-COM board game.