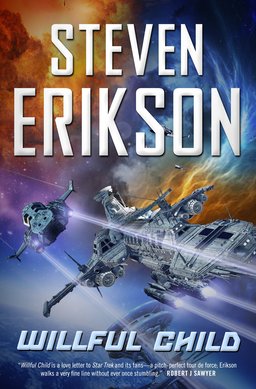 Since we’ve been talking about Steven Erikson and Ian C. Esslemont’s Malazan books this weekend, I thought I’d slip in a mention of Erikson’s upcoming novel Willful Child — which looks like a pretty significant departure from his epic fantasy roots.

Erikson completed his monumental Malazan Book of the Fallen with the tenth volume, The Crippled God, in March 2011. He didn’t take much of a breather: Forge of Darkness, the first novel in his new Kharkanas Trilogy, appeared a year later; the second, Fall of Light, is scheduled to arrive next February. He’s also been writing short tales featuring the necromancers Bauchelain and Korbal Broach — five so far, including Crack’d Pot Trail.

But now comes word that his latest book is a tongue-in-cheek space opera called Willful Child, which Robert Sawyer calls “A love letter to Star Trek and its fans — a pitch-perfect tour de force.” Given Steven Erikson’s gifts as a storyteller, and my own love of Star Trek, this has immediately become one of the most anticipated novels of the year for me.

These are the voyages of the starship A.S.F. Willful Child. Its ongoing mission: to seek out strange new worlds on which to plant the Terran flag, to subjugate and if necessary obliterate new life-forms, to boldly blow the…

And so we join the not-terribly-bright but exceedingly cock-sure Captain Hadrian Sawback and his motley crew on board the Starship Willful Child for a series of devil-may-care, near-calamitous and downright chaotic adventures through ‘the infinite vastness of interstellar space.’

The New York Times bestselling author of the acclaimed Malazan Book of the Fallen sequence has taken his lifelong passion for Star Trek and transformed it into a smart, inventive, and hugely entertaining spoof on the whole mankind-exploring-space-for-the-good-of-all-species-but-trashing-stuff-with-a-lot-of-high-tech-gadgets-along-the-way, overblown adventure. The result is an SF novel that deftly parodies the genre while also paying fond homage to it.

This looks like fun. It would be interesting to trace Star Trek’s influence on “serious” science fiction – I’ll bet it would be more than is commonly assumed. Alice Sheldon (aka James Tiptree Jr.) was about the most un-Star Treklike writer alive, but she adored the original series, and though I’ve never seen it corroborated anywhere, I’d be willing to bet my bank account (not much of a bet, admittedly) that one of her greatest (and bleakest) stories, “A Momentary Taste of Being” was inspired by the Star Trek episode “The Immunity Syndrome.” (You remember – that’s the one with the giant space amoeba.)

I wouldn’t doubt it… one of her first stories, “Beam Us Home,” is very clearly a Star Trek story, about a fan who believes he belongs on the Starship Enterprise. It’s a terrific tale, and the ending packs a punch for any Trek fan.