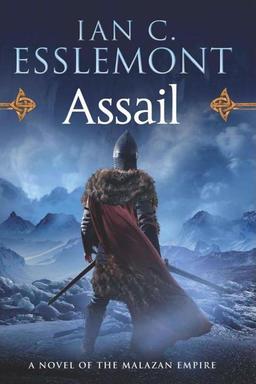 Steven Erikson made a name for himself with his 10-volume Malazan Book of the Fallen series, acclaimed by many as the finest heroic fantasy series of the last few decades. He co-created the world of Malaz with a member of his gaming group, Manitoba author Ian C. Esslemont, who for the past four years has been writing his own novels in the same setting, starting with Night of Knives (2010).

Esslemont has built his own fan base over the years, and the sixth and final novel in his Malazan series, Assail, arrived in hardcover and trade paperback last week.

Tens of thousands of years of ice is melting, and the land of Assail, long a byword for menace and inaccessibility, is at last yielding its secrets. Tales of gold discovered in the region’s north circulate in every waterfront dive and sailor’s tavern, and now countless adventurers and fortune-seekers have set sail in search of riches. All these adventurers have to guide them are legends and garbled tales of the dangers that lie in wait — hostile coasts, fields of ice, impassable barriers and strange, terrifying creatures. But all accounts concur that the people of the north meet all trespassers with the sword. And beyond are rumoured to lurk Elder monsters out of history’s very beginnings.

Into this turmoil ventures the mercenary company, the Crimson Guard. Not drawn by contract, but by the promise of answers: answers to mysteries that Shimmer, second in command, wonders should even be sought. Arriving also, part of an uneasy alliance of Malazan fortune-hunters and Letherii soldiery, comes the bard Fisher kel Tath. And with him is a Tiste Andii who was found washed ashore and cannot remember his past life, yet who commands far more power than he really should. Also venturing north is said to be a mighty champion, a man who once fought for the Malazans, the bearer of a sword that slays gods: Whiteblade. And lastly, far to the south, a woman guards the shore awaiting both her allies and her enemies. Silverfox, newly incarnated Summoner of the undying army of the T’lan Imass, will do anything to stop the renewal of an ages-old crusade that could lay waste to the entire continent and beyond.

Casting light on mysteries spanning the Malazan empire, and offering a glimpse of the storied and epic history that shaped it, Assail is the final chapter in the epic story of the Empire of Malaz.

Esselmont’s first Malazan book, ‘Night of Knives’ is my favorite of the entire series, including all of Erikson’s novels. Really good.

Glad to hear it, Bob! I was lucky enough to hear Steven and Ian give a joint reading at the World Fantasy Convention, many many years ago. Glad to hear his book fulfilled that early promise!

Assail is almost as good as Night of Knives, a book I also greatly like (better than many readers it seems, but not better than all of Erikson’s I’m afraid 😉 ).