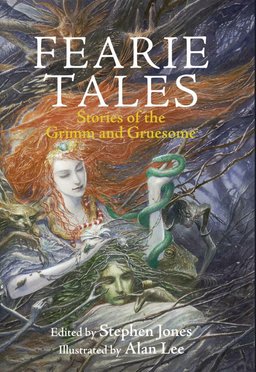 If you have had the opportunity to read the original tales of the Brothers Jacob and Wilhelm Grimm, then you know that their stories are a far cry from the Disney and Warner Brothers’ versions.

Red Riding Hood and her grandmother are eaten, Snow White’s step-mother must dance at Snow White’s wedding wearing hot, leaden shoes until she dies, and Sleeping Beauty’s mother-in-law tries to eat her along with her two children as soon as her prince turns his back.

Apparently, in-laws were a problem even in 1812…

As an aficionado of all things creepy, Children’s and Household Tales (a.k.a. Grimm’s Fairy Tales) have long since been a staple in my library, which may explain why I don’t get asked to babysit more often. So I was thrilled to open a package from Quercus Publishing this week containing their newest offering, Fearie Tales, Stories of the Grimm and Gruesome.

Fearie Tales is a compilation of stories, entirely in the tradition of the Brothers Grimm, but penned by a thoroughly modern list of storytellers such as Garth Nix (The Seventh Tower series), Ramsey Campbell (most award-winning author in the horror genre), and my personal favorite, the legendary Neil Gaiman. The book is decorated with several disturbing illustrations by Oscar-winning Tolkien artist Alan Lee.

Containing thirty-one tales ranging in length from three pages to over fifty, it was easy to immediately dig in to — so I can give you at least a preliminary report. “Rapunzel” is a direct reprint of the 1812 Grimm tale, which itself is a retelling of the French story of Persinette originally published in 1698. The prince does indeed climb up to Rapunzel’s chamber using her hair, leaving her pregnant with twins and without his last name.

They all do live happily ever after… eventually.

“Down to the Sunless Sea” by Neil Gaiman reads exactly as though it had been written in the 1800’s, but instead is a modern addition. In his typical style, Gaiman dives right into his dark tale:

The Thames is a filthy beast: it winds through London like a snake or sea serpent. All the rivers flow into it, the Fleet and the Tyburn and the Neckinger, carrying all the filth and scum and waste, the bodies of cats and dogs and the bones of sheep, and pigs down into the brown water of the Thames, which carries them east into the estuary and from there into the North Sea and oblivion.

He goes on to tell the hopeless story of a ghostly woman whose son is lost in a shipwreck, though he did not die by drowning. 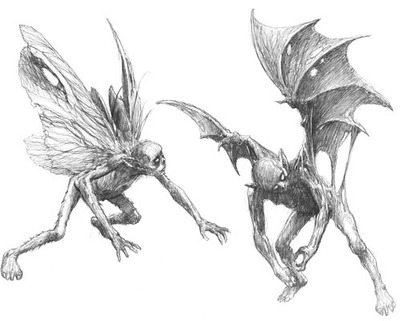 Stephen Jones, the editor of Fearie Tales, has an impressive repertoire himself, being an award-winning editor and the author of more than 100 books in the horror and fantasy genres, including The Mammoth Book of Vampires, The Conan Chronicles, and Dark Terrors.

In Fearie Tales (get it? FEARie Tales), Jones brings together:

…a fantastical mix of spellbinding retelling of classic stories such as Cinderella, Hansel and Gretel and Rumpelstilskin, along with unsettling tales inspired by other children’s classics, all interspersed with the original tales of their inspiration.

Within the first hour after opening the package, I had already devoured five of the tales and have only put the book down long enough to tell you about it. Do I like what I’ve seen so far?

Love it actually – every twisted, macabre bit and the bedtime-story-like (albeit adult) way in which they are written.

Fearie Tales will be in stores on September 23, just in time for the beginning of “the season.”

Have a comment, question or your own experience with Grimms’ not-really-for-youngsters tales? Post it here or drop a line to sue@blackgate.com.

I’m not a huge Alan Lee fan, but that is a great cover. 🙂

Editor Stephen Jones has a pretty impressive horror pedigree, including an award winning biography of the late Basil Copper.

Which I will be writing about in The Public Life of Sherlock Holmes when it comes out in 2015. I’m ramping up the Pons coverage…

BB, nice – we will keep an eye out for that.

[…] in August I had the pleasure of reviewing a revisiting of the Grimms’ work with Fearie Tales: Stories of the Grimm and Gruesome from Quercus Publishing. In it, modern writers were invited to take up the “voice” of Jacob […]