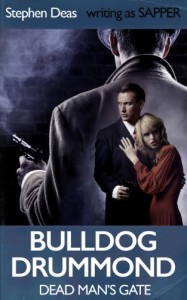 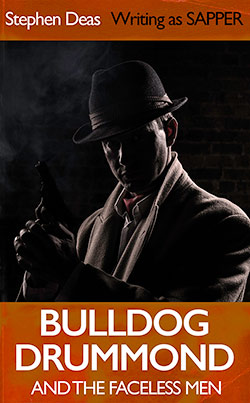 I’ll admit to a fair amount of skepticism on the selection of Stephen Deas as the continuation author. I didn’t fall prey to the common prejudice that suggests a fantasy author could not write a pulp detective thriller, rather my reticence was based on remarks the author made about the character and Sapper on his own blog.

Admittedly, I am an anomaly. Even among the limited, but devoted audience for vintage pulp fiction, Sapper’s Bulldog Drummond books are looked upon with jaded eyes. They are frequently disparaged for displaying exceptionally racist attitudes during an era when racism was common.

By the Second World War, the books were being criticized as fascist and offensive. The later sequels toned the character down considerably and despite the property’s undeniable influence on the thriller genre, it would seemed to have passed the Rubicon of public tolerance. From that perspective, I expected something akin to a Sapper apologist to take up the reins and reintroduce the character. Stephen Deas may not have been the author I wanted, but it turns out he was the one the property needed. 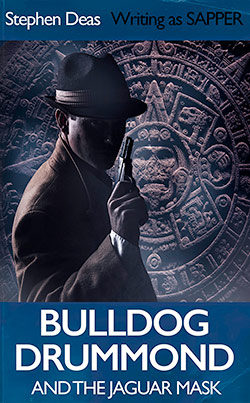 The first of the books to reach the digital market is Dead Man’s Gate. The setting is 1926, immediately following the events of The Final Count. Carl Peterson is dead and Hugh Drummond is feeling restless once more.

The novel’s opening echoes the first Drummond thriller (almost to a fault), but quickly sets down its own path. Deas establishes Inspector Wallis as a closer friend to Drummond than Sapper’s Inspector MacIver and adds the unexpected development of marital discord to Hugh’s relationship with Phyllis, who has grown tired of his insistence at recklessly pursuing the life of an adventurer. At times, Deas wanders between faithful recreation of the originals and a period-piece reboot. He is not overly concerned with continuity so much as creating a rollicking good story and yes, Dead Man’s Gate handily succeeds in being the most authentic Drummond thriller in sixty years.

Helping enormously is the creation of John Crabbleston as the heir apparent of Carl Peterson. Since Drummond is such a strong personality, the best books in the series were the few that saddled him with an equally strong opponent. Sapper’s love of outrageous humor is entirely absent here, but the relative seriousness of the socio-economic background to Crabbleston’s capers makes the absence of banter entirely appropriate.

I will note that Deas chooses to downplay the class differences that were so important to Sapper’s world. Denny’s confinement to the role of butler and social inferior, while the rest of Hugh’s former World War I squadron were his close friends and social equals is the most obvious example. Here, Denny is the only compatriot present and Algy and the rest find their place in the narrative taken by the working class laborers who find themselves exploited by Crabbleston under his guise as an idealistic communist leader.

While I found Drummond’s ability to navigate between clubland and the workingman’s pub a bit too easy, I suspect Deas simply wished to avoid making the character appear snobbish and narrow-minded to modern readers. From that perspective, I’m willing to accept the odd anachronism.  I do wish the climax had not involved an airship, considering Peterson met his fate in one in the adventure that preceded this one in the character’s chronology, but Deas handles the sequence quite well. Just as I suggested The Final Count’s climax may have influenced Thomas Harris’s Black Sunday, Deas’s nerve-wracking climax appears to have taken the influence full circle.

It is no easy task to revive a vintage property, particularly when society’s mores and attitudes have changed radically since its commercial heyday. Deas acquits himself honorably and leaves me looking forward to Books Two and Three over the course of the next year. Here’s hoping we haven’t seen the last of John Crabbleston. It’s a joy to have Hugh Drummond face off against another villain worthy of Carl Peterson’s mantle. Now if only a print edition materializes somewhere in the future, my Luddite soul will rejoice. In the meantime, Bulldog Drummond is back at last and in the hands of a worthy author. Enjoy!

I find it intriguing that, despite the notion that “normal” people hate comic books, prose literary heroes from prior decades have tended to have a rougher time since about 1970 in attempts to start television and/or film franchises, while indigenous, native to comic books heroes have had some success. Presumably, one should revert to the pre-Superman/Zatara heroes of 1938 if “normal” people hate comic books. Bulldog Drummond serves as perhaps an example of this trend.