Last week I was talking about Lord Dunsany and his role both as an early 20th-century fantasist and the founder/inventor of the club or bar story. Talking about Dunsany reminded me of another early 20th-century fantasist, E. Nesbit. Edith Nesbit’s work actually pre-dates Dunsany’s, but there are a couple of reasons she’s not as well known, or as well respected outside of our field, as he is.

The first one is fairly obvious: female writers don’t get as much recognition and respect as male writers*, but even more obvious is that she’s considered a children’s writer – not YA – and they get even less respect, regardless of gender. About 40 of Nesbit’s approximately 60 novels were written for children.

Not all of these were gems, of course, but there are several which earn Nesbit a place on anyone’s book shelves. The first notable fantasies are her stories of the Bastable children,  The Treasure Seekers (1899), The Wouldbegoods (1901), and The New Treasure Seekers (1904). These were widely (and wildly) popular both at the time they were written and subsequently, but I have to say that even as a child myself, I thought Oswald Bastable needed taking down a peg, and my personal favourites were what’s called the Psammead Series, featuring the siblings Robert, Anthea, Jane, and Cyril, along with their baby brother known as the Lamb. 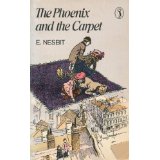 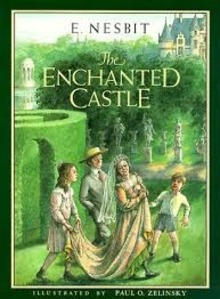 The children first encounter the Psammead, or sand fairy, in Five Children and It (1902). This is a beast that hates to get wet, and must grant one wish a day. We’ve all been children ourselves, and we can imagine the type of trouble their wishes can get them into. One of the interesting things from the sociological and psychological perspectives is just how similar the wishes of turn-of-the-20th-century children are to those of the present day. Or for that matter, to those of adults.

The Phoenix of The Phoenix and the Carpet (1904) can’t grant wishes, but it can recognize a flying carpet when it sees one, and children who can wish themselves anywhere can get into just as many adventures as those with a Psammead. In fact, the Phoenix has to recourse to the sand fairy at one point to get the kids out of trouble.

The Story of the Amulet (1906), though it reunites the children with the Psammead, isn’t quite as strong, but is still a very enjoyable story, especially as it reflects the extreme contemporary interest in Egyptology. In fact, if the terms had existed back then, all of the books I’ve mentioned so far would be considered contemporary fantasies. They’re all firmly set in the real world of their time, and the children are living the real lives – sometimes not so happily – of Edwardian children.

Nowhere is this last more obvious than in another of my favourites, the stand-alone, The Enchanted Castle (1907). Here the three protagonists, Gerald, Cathy, and Jimmy, meet a princess who accidentally makes herself invisible. The princess is really Mabel,  the castle housekeeper’s niece, play-acting that she has a better life – until the invisible part, which isn’t play-acting at all.

It’s when the children discover the real magic of the castle that the modern reader is most reminded of Dunsany. In the moonlight, the statues in the castle’s garden come alive and the children experience the true mysteries of magic in a way that can’t be done with real things, like sand fairies and phoenixes.

There’s no fantasy in it, but I’d be remiss if I didn’t mention what’s probably the most popular and well-known Nesbit novel, The Railway Children (1906). Or perhaps I’m wrong in saying there’s no fantasy. The make-believe and play-acting of children may very well be the fundamental fantasy that drives all of us as adults. Maybe there really is a dragon in the train tunnel. Maybe it only turns into a train as it comes out.

*not arguing the point today, just making an observation.

I remember seeing the Nesbit books on the shelf at the school library. I didn’t realize they were that old (well, the stories, that is — the editions were 1960s-vintage reprints, I’m sure); I’m also honestly not sure if I ever picked them up — should probably rectify that.

Joe: the great thing about picking up this kind of book as an adult is that even though they’re true novel length, they read very quickly. The original illustrations are pretty interesting as well.

I’m pretty sure I have some old horror anthologies with E. Nesbit stories in them. I never considered whether Nesbit was a woman author. (Didn’t, and still don’t, care of course.)

Nesbit wrote a lot of horror stories (I think ‘Mansize in Marble’ was one of her’s) but I read and enjoyed all the children’s books Violette mentions -they are well worth checking out. I don’t remember them being dated stylistically (possibly because they were intended for children) although the modern child might think differently. The Narnian books – especially ‘The Magician’s Nephew’ – mimic her style very closely, as Lewis was a big fan of her work. And on that note, one of her best children’s books is also her most accessible – a collection of short stories which I knew as ‘The Last of the Dragons and Other Stories’, but was also issued as ‘The Book of Dragons’. One story is called ‘Uncle James’, I suspect the eponymous character was the inspiration for Uncle Andrew in ‘The Magician’s Nephew’ – both are magicians and both are rogues.

“The next morning Uncle James put on his best coat and hat and the waistcoat with the gold snakes on it–he was a magician, and he had a bright taste in waistcoats–and he called with a cab to take the Princess out.”

Nesbit wrote one of the most bloodcurdling ghost stories ever, “John Charrington’s Wedding.” It certainly has what today would be termed a strong feminist subtext. Five Children and It, on the other hand, is pure delight. Am I mistaken or was it done for television at some point?

Yeah – some time back in the 70’s or 80’s, I think. I don’t know what Nesbit’s reputation is like now, (ie, whether it’s been entirely eclipsed by Rowling and authors like Diana Wynne Jones) but she was very much a staple of my childhood – and I’m Irish. What’s also interesting about many of the books (aside, naturally, from the magical aspect) is that they are very critical of the time in which they were written and set – the Edwardian era – which by the 70’s/80’s had become shrouded in a fuzzy, nostalgic glow. Nesbit was quite political.

I’d forgotten all about the ‘John Charrington’s Wedding’!

@James: She wrote scads of short stories, many of them horror. As Aonghus notes in the comment after yours, many of her fantasy stories were collected in The Last of the Dragons.
RE the woman author thing, when you see a person using initials, particularly in that era, or pre WW2, it’s often to disguise their gender.

@Aonghus: Do you have a date for “Mansize in Marble”? I’ve wondered whether it predates the statues coming alive in The Enchanted Castle, or vice versa.
I’m going to have to reread “Uncle James”. I think I read somewhere that Lewis acknowledged Nesbit’s influence, but I’m not sure.

@Thomas: Like Aonghus, I’d forgotten about “John Charrington’s Wedding”.
I didn’t see the 5 Children production, but I do remember the Enchanted Castle, and I believe that one of the Treasure Seekers was filmed as well. If I remember correctly, the BBC was behind it, which likely means we saw it here in Canada, but it may not have made it to the US.
Of course, The Railway Children is still available on DVD, etc.

@Aonghus, she certainly was more political than I had realized, though as you say, the subtext in many of the novels is clear.

Have a look at her Wikipedia bio:
http://en.wikipedia.org/wiki/E._Nesbit

Re the link. Very interesting about Nesbit’s political convictions! I never knew she was actually one of the founders of the Fabian Society (although I did know she was a Fabian).

Lewis was a big fan of the Bastable stories, as far as I can remember. He establishes the time-frame in ‘The Magician’s Nephew’ by telling us -“In those days Mr Sherlock Holmes was still living in Baker Street and the Bastables were looking for treasure in the Lewisham Road.” Oddly enough, the sequence most redolant of Nesbit for me – in the same book – has nothing to do with the Bastables. It’s the one in which the Empress of Charn (aka the White Witch) is stranded in London. It reminds me a lot of that chapter in ‘The Story of the Amulet’ (actually called ‘The Queen in London’) in which, thanks to the children, the Queen of Babylon ends up in London.

I remember coming across another Nesbit story – ‘Amabel and the Aunt’ in which a little girl goes through a magic wardrobe into another world, which made me wonder just how seriously Lewis took the Narnian books? Most of them were written quickly (‘The Lion, the Witch and the Wardrobe’ in around a month) and the ideas and characters all seem to be borrowed from other works of fiction.

If you trust the Internet, ‘Mansize in Marble’ came out in 1893, which means it preceded ‘The Enchanted Castle’ by around 14 years.

Thanks for the information, Aonghus. I had noticed some of the echoes myself, but since I read the Narnia books first, I probably had the direction of the echo wrong.

Glad to hear Nesbit getting some attention. I grew up on her, and re-read the books to my kids, and posted them someplace on here (probably search under Fantasy Out Loud) at Black Gate. Edward Eager thought she was the best fantasy writer ever. A few of her chapters sad/hilarious “of their time” views on what African people might be like, but even there, it’s not so much that she lacks heart and empathy as she lacks information. Wonderful writer.

There was a fantastic BBC television adaptation of The Phoenix and the Carpet which aired in 1976-77. This really caught my imagination as a child, sadly it has never been issued on DVD. The BBC made a newer adaptation in 1997 which was no where near as good.

E Nesbit’s later novels for children are much more interesting than the Psammead trilogy. The House of Arden and Harding’s Luck are time travel adventures which work in parallel. The Edwardian children in The House of Arden meet Dicky Harding whilst in Jacobean England. Turns out that Dicky is from their time as well. His story is told in Harding’s Luck, which also completes the adventures of the other two children. In The Magic City, a young boy builds a city out of books, chess and other game pieces, cruets, crockery – whatever he can lay his hands on. Then he enters the city and has many adventures in a land where he encounters all of the cities he has ever built. At times, you think that E Nesbit is going to lose the plot but she keeps a very firm hand on it all. Some interesting satire about suffragettes in there as well.

As for C S Lewis, he was always stealing other people’s ideas.