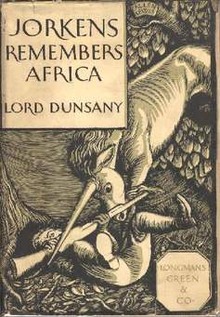 I’ve always thought that “Lord Dunsany” has to be one of the more perfect names for a fantasy author. You might argue that this isn’t his name, merely his title, and that Edward Plunkett might not sound quite so perfect, fantasy-wise. But on the other hand, it’s really Edward John Moreton Drax Plunkett, and growing up I always believed that the “Drax” must somehow derive from “draco.” While I’ve never been able to confirm that, I still feel that it should be so, and that in a perfect world, someone in his lordship’s family was named for a dragon – which really would make it the perfect name for a fantasy author.

All of which would work out quite well, not just for his lordship, but for us, since Dunsany is one of the leading figures in 20th-century fantasy, whose work predates that of Lewis and Tolkien. The quality that I’ve always associated with Dunsany’s writing is an air of sublimity. There’s always the feeling in his work of great immensity, of something just outside of our reach, that we’re only being shown a part of a much greater whole. A couple of posts ago, I was talking about types of magic, and in those terms, Dunsany’s falls into the category of the mysterious, rather than the quantifiable. 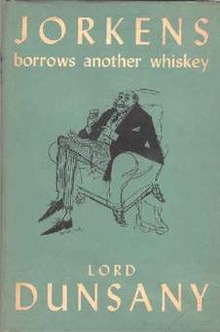 Reading Gene Wolfe is about the closest you can get to reading early Dunsany.

You wouldn’t think that the sublime, the tenuous, and the ineffable would be elements that fit in the bar, or club, story, but when it’s Dunsany’s Joseph Jorkens under consideration, they definitely do. Dunsany may nowadays be better known for such classics as The Charwoman’s Shadow, The King of Elflands’ Daughter, or The Sword of Welleran, but there was a time when his Jorkens stories (1925–1957) dominated short story markets.

Tall tales aren’t uncommon in Western literature, of course, but the Jorkens stories are considered to be the foundation for the bar or club story that I’ve talked about before (see here, and here, or here). Dunsany’s responsible for not just the Fantasy or Science Fiction version of these stories, but I’d say even for PG Wodehouse’s Mr. Mulliner Stories, which didn’t appear until 1926. Dunsany established several of the bar story conventions, including that of the first person narrator, who creates the framework for the stories with his description of the bar setting and the teller of the tales.

The key to these  stories is of course Jorkens himself, and yet, creating another convention, very little is actually learned about the man from the stories themselves. He seems to have been at some time in his past an explorer, or big-game hunter, which establishes his bona fides as someone who’s been to strange places and seen odd things – though nothing odder than the Abu Laheeb which appears in the very first story. Jorkens seems to be a bit down on his luck at present, and cadges drinks in the Billiards Club in exchange for his fascinating stories.

Jorkens always presents his tales as true, but unprovable, at least by him, and becomes mortally offended if anyone even questions him too closely. The point of setting this type of story in bars and private clubs, of course, is partly to allow for the presence of alcohol, or similar substances, which would explain not only the bizarre tales themselves, but the willingness of the listeners to believe them. The Jorkens stories, however, do have some basis in fact, as Dunsany says that he drew on his own wide experiences in exploration and game hunting to provide settings which were as real and factual as he could make them.

The very ineffableness of the Jorkens stories makes them very difficult to summarize, but fortunately you can read them for yourselves. New editions of the collected stories appeared in 2005 edited by ST Joshi.

I’ve read much of his Books of Wonder-era fantasy but never more than dipped my toes into Jorkens. Really must rectify that one of these days.

I had no knowledge whatsoever of these Jorkens books. Thanks for sharing!

I have to admit my only knowledge of Dunsany for years was that Lovecraft’s early stories were reminiscent of Dunsany. It wasn’t until recent years that I found out about Dunsany’s fantasy work such as The King of Elfland’s Daughter. Now I know of his Jorkens’ series.

Though formerly unfamiliar with Jorkens, your description of him reminds me of the Commander McBragg segments on the old Rocky and Bullwinkle show. It sounds as if the inspiration for McBragg might’ve been Jorkens.

James: I wondered the same thing about the character of the old British RAF officer in The Mummy, when I first saw that movie. Seems a useful stereotype.

NightShade published all the Jorkens stories in 3 volumes about a decade ago (give or take a year). Unfortunately there was never an electronic edition and prices for second hand copies can run into triple digits.

In the 60s and 70s, Sterling E. Lanier had a character named Brigadier Ffellowes who was similar to Jorkens. Again, the two collected volumes (especially the first) are not cheap.

@westkeith: I think the 3 volume edition you mention is the one I was thinking of, edited by Joshi. According to Amazon, it came out in 2004, which makes it about 10 years ago.