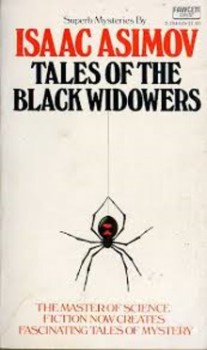 Every now and then I get reminded that there’s a whole group of people out there who think of Isaac Asimov as a mystery writer. It’s not that they don’t know he’s a famous SF writer, it’s just that they’re familiar with his work through the pages of Ellery Queen’s Mystery Magazine.

Asimov wrote “main stream” mystery novels, of course, such as Murder at the ABA, or A Whiff of Death, and SF mysteries like Caves of Steel and The Naked Sun (known along with others as The Robot Novels). But it’s his Ellery Queen stories that fit the topic I’ve been talking about for the last few weeks, the bar story.

A quick review: bar stories are a series, using as a framing device the setting of a bar or a club. A group of people are “regulars” and tales are told. These are not usually the same thing as stories set in bars, but the lines can blur a bit.

The Black Widower stories nod in the direction of Clarke’s Tales from the White Hart in that the characters belonging to the club are based on real people – in fact, they’re based on a real club of which Asimov was a member, called The Trap Door Spiders. The real-world club was started by Fletcher Pratt and if you’d like to have a complete list of the “real” members, as well as finding out which “fictional” member is which, have a look here. 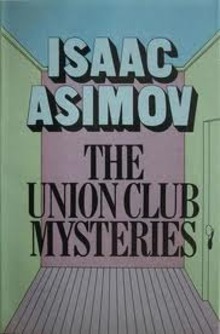 Asimov insists that he uses only his friends’ physical appearance for his Black Widower characters, but I strongly suspect that some of their personalities also snuck in from time to time. Asimov also claims that none of the members is based on him, but I’m not so sure of that. He did appear at least once as a guest, as did the Amazing Randi and Harlan Ellison.

The format of the stories is straightforward and rarely deviates: each month, one of the members brings a guest to the club dinner; the guest is “grilled” about their profession and interests; it turns out that the guest has an unsolved problem – sometimes criminal, sometimes professional, sometimes personal, occasionally just puzzling – and the members of the club, along with their inestimable waiter and honorary club member Henry, solve the problems. It is, in fact, Henry who provides the final solution, after the club members have swept away the obvious.

It’s important to note that these are “puzzles” or “arm chair mysteries” where the characters literally do not leave their seats to solve the problems, so they’re not going to be to everyone’s taste. I find them brisk, well-written, entertaining, and fair in the traditional mystery sense, in that the readers get all the same information as the members, and are welcome to solve the problems themselves, if they can. 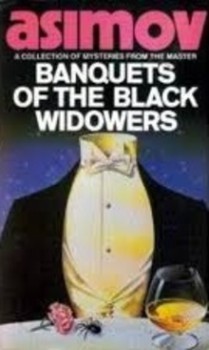 The Union Club mysteries are traditional in another sense. Like PG Wodehouse’s stories featuring Mr. Mulliner, or Lord Dunsany’s Jorkin stories, the setting is an old fashioned gentleman’s club, and the stories are all told by the same raconteur. In the Union Club, this is a  man named Griswold. who has a mysterious past as some kind of secret agent or behind-the-scenes government fixer.

The problems solved are usually more serious than those found in the Black Widower stories, and often involve elements of the thriller, but the tone is light, bordering on the humorous. These are also puzzle stories, and in this case, the puzzle is solved by Griswold himself, often using another literary device, the twist ending.

The Union Club stories are a lot of fun, but I don’t find them as entertaining as the Black Widower stories, probably because the latter have more personalities to have fun with. Both sets of stories require some suspension of disbelief on the part of the readers, but that’s not unusual in the bar story format, and is often considered part of the fun.

All of these stories have been collected into anthologies, which offer afterwords and other information from Asimov. At one point, he says that while it’s occurred to him to write a Black Widower novel, it’s “not a thought that greatly attracts me.”

I think we can guess why. The bar story has to be short to be successful. In fact, it should last about as long as it takes to finish a leisurely drink in a bar.

Violette Malan is the author of the Dhulyn and Parno series of sword and sorcery adventures, as well as the Mirror Lands series of primary world fantasies. As VM Escalada, she is writing the soon-to-be released Halls of Law series. Visit her website www.violettemalan.com.

Asimov wrote a Sherlockian essay entitled, ‘Dynamics of an Asteroid.’ He liked it so much that he expanded it and turned it into a Black Widower story, ‘The Ultimate Crime.’

‘Crime’ has been included in a couple of anthologies, one being ‘Sherlock Holmes Through Time and Space’ which Asimov co-edited.

Thanks for commenting, Bob. I thought “The Ultimate Crime” was one of the best BW stories. I talk about the Sherlock Holmes anthology in a previous post, http://www.blackgate.com/2013/08/02/more-than-whodunit-the-science-fiction-mystery/

I recall a terrific little Asimov mystery in which a theoretical physicist murders an engineer who’d scoffed at the value theoretical physics. I wish I could remember the name of the story.
And include me among the admirers of the Black Widower tales.