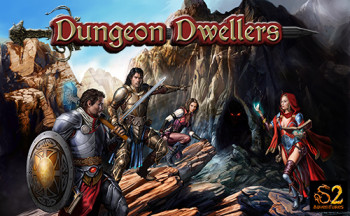 Yesterday, I spent some time talking about some new games that are becoming available from smaller game publishers. Several of these had their origins in Kickstarters … and that’s becoming such a common thing that it’s worth devoting a single post just to Kickstarter-based games. This model by which fans can directly support their games that are under development is growing more and more popular among the GenCon crowd. It seems like most of the smaller, independent game companies have been going the Kickstarter route.

We’ll start with the new games and products that have already been successfully funded on Kickstarter:

Dungeon Dwellers – This is a cooperative dungeon crawl-themed card game, which I stumbled upon while trying to get across the Exhibit Hall on Sunday. Unfortunately, at the time, I didn’t have time to play a demo of the game, despite the fact that it looked like a lot of fun. Fortunately, their website has a number of videos showing how the game is played for those who are interested.

Incredible Expeditions: Quest for Atlantis – This steampunk exploration card game was so new that they didn’t even have copies to sell at GenCon because it was held up by U.S. Customs. (People who have backed games on Kickstarter have no doubt gained an amazing appreciation for how diligent our nation’s Customs officials are … at least when it comes to slowing down delivery of games.) They did, however, have demo copies and a great booth that drew a lot of attention and traffic to make use of those demos. The game can be played either cooperatively or competitively, as well, which I always consider to be a bonus. Again, their website has a great video talking about the game, though, so check it out. 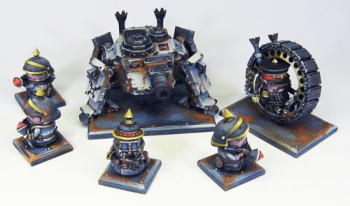 Rivet Wars Eastern Front (Amazon) – This World War I-ish battlegame pulls together a lot of themes. The little round army soldiers and weapons of destruction are charmingly adorable; never have militant Prussians looked so cuddly. The goal of the game is to move units across the board into position to hold tactical positions which allow you to gain victory points. If you are standing on one of these key tiles, then you get victory points at the end of your turn. But with the other army trying to kill you, holding the position is much harder. And as the game progresses, the players gain Rivet Points and are able to buy more powerful fortified units, such as tanks, planes, and so forth. The game had a wildly successful Kickstarter of over half a million dollars against a goal of $25,000, so they have a ton of expansions coming along: Battle of Brighton, War Room, Heavy Metal, and Second Wave. And then the upcoming Western Front game will introduce the new Ruska and Ottoman factions. And, yes, the promo materials include the mandatory Russian bear cavalry.

Myth – I spent Thursday morning trying to track down this booth and then standing in line for a bit, because I was actually a backer of the Myth board game from Megacon, the makers of the MERCS wargame. This is a cooperative fantasy miniature game which has a lot of potential and was also wildly successful on its Kickstarter. The stretch goals just keep coming on and on for this game, which is something of a mixed blessing. It definitely keeps things from stagnating. Since I own Myth, I won’t say much more about it here, because I’ll no doubt review it soon. 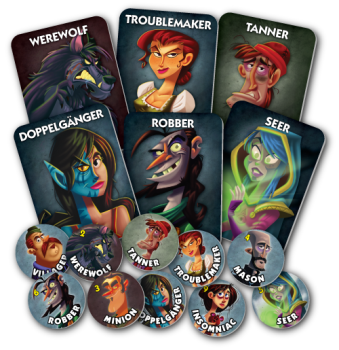 Of course, of far more interest to readers are those games to watch out for on Kickstarter and I also have a handful of those to offer!

Strife: Legacy of the Eternals – This is yet another card game. I played a quick demo of it and it had two things I like in games: fun and quick. (I also like “fun and long” and “fun and torturously long” … but everything to its season.) This is a highly strategic game of near-perfect information, which incorporates a lot of cool mechanics. The goal of the game is to use various warriors from your hand (both players have the same 10 warriors, with powers from 0 to 9) to claim locations that are worth points. However, each warrior has a power and the warrior used last round has a “legacy” power that comes into play on the following round, so things can take unexpected twists.  There’s also a cool mechanics about how to resolve ties. One player begins with a D10 that starts on 1. If they want to win a tie, they can do so by increasing the value of the D10 by one and passing it to the other person. Whoever has the die at the end of the game earns that many extra points … so as the game progresses, the risk of using the tiebreaker die increases. The game is slated to hit Kickstarter in October.

Gateway Inquisition – This is a card game built around the fantastic artwork of Sean Andrew Murray.  I spoke with him in the Artist’s Hall and saw his book Gateway: Book of Wizards, which was also funded through Kickstarter. You can follow Sean on his blog or on Twitter, and I’m sure he’ll make many announcements when Gateway Inquisition goes live on Kickstarter. There wasn’t a demo of this game yet, so I haven’t played it, but Sean indicated that it would be going on Kickstarter some time in the next couple of months.

Captain’s Wager – Billed as a steampunk variant of poker, this betting and hand management game is built around the theme of multiple airship captains trying to take on the same job. The game consists of playing crew cards, with the goal of playing the highest value cards, with a betting option to increase payout if you’re successful at taking a job. Captain’s Wager is slated as “Coming Soon to Kickstarter” from Grey Fox Games in early September 2014.