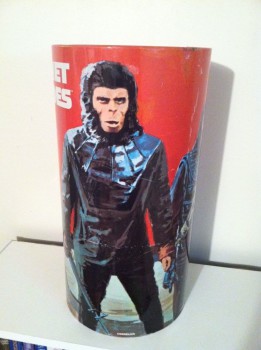 It had long ago slipped my mind, but I was recently reminded of one childhood fad that was literally a load of garbage. I’m speaking of tin waste bins (garbage pails, trash cans, or whatever you happened to call them) lithographed with licensed characters from popular films, TV shows, and comic books.

Thinking back, it seems everyone had one when I was in grade school – you’d start in on a book report, crumple up your first attempt in frustration (yeah, we actually wrote reports with pen and paper back in the olden days of yore), and toss it into the knee-high basket emblazoned with characters from Star Wars or G.I. Joe. When you were sick, they also served as a handy vomit bucket. 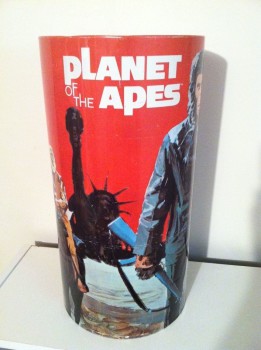 So, naturally, like old lunch pails and other detritus of childhood, some of them are now collectible. The drive of nostalgia — coupled with the fact that most of those old trash cans, rusty and dented, have themselves been long relegated to landfills – means that those featuring popular franchises in decent condition can fetch a few bucks on eBay.

This past May, I did some vintage-toy hunting at the famed 100-mile garage sale along the upper Mississippi River. The very first thing I grabbed at the very first sale I stopped at was a 1967 Planet of the Apes garbage can manufactured by Cheinco. I bought it for a buck. I’m not a Planet of the Apes collector, but I knew all things PotA are perennial favorites with some collectors – even before the popularity of the rebooted franchise. Over the next couple months, I tracked what a few went for on eBay auctions: anywhere from $29 to nearly $60, depending on condition. So I posted mine, and it just sold for $31 (plus $13.50 shipping and handling). A $30 profit – maybe not enough to go ape over, but not too shabby.

I’d be curious to hear if anyone else’s memory has been jogged by this brief post. What was on the trash can in your room? Star Trek? Battlestar Galactica? Care Bears? I’ll keep my eye out for you at the garage sales.