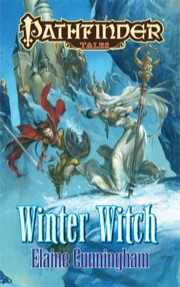 It’s a move that has a certain inevitability. When TSR announced a line of novels to support Dungeons and Dragons — beginning with the Dragonlance novels of Margaret Weis and Tracy Hickman in 1984 — it was an instant hit, and helped catapult TSR to new success as the fourth largest publisher in the country.

For a brief time in the early 90s, TSR’s novels far surpassed their game products in sales. At some point virtually every major adventure game publisher — including White Wolf (Vampire the Masquerade), Game Designer’s Workshop (Traveller), FASA (Battletech, Shadowrun), and Chaosium (Call of Cthulhu, Pendragon) — has experimented with a fiction line, with varying success.

Now that Pathfinder has grown to be the system of choice for many gamers, something similar was clearly in the cards. This from the official announcement:

Pathfinder Tales novels are standalone adventures written by some of fantasy’s bestselling authors…  journey through Golarion as you never have before, through the eyes of canny warriors and flippant scoundrels, and see firsthand why the Pathfinder world has twice earned the prestigious ENnie Award for Best Campaign Setting. 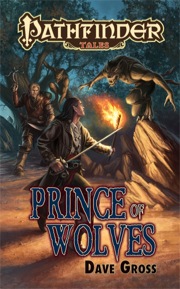 Pathfinder Tales will be mass-market paperbacks released four times a year. The books are also available by subscription, and subscribers receive free downloadable PDF versions, which is a nice perk.

Two novels have been announced so far: Prince of Wolves by Dave Gross, and Winter Witch by Elaine Cunningham.

To promote the novels and give reader a free taste of what’s in store, Paizo has also launched the Pathfinder Tales web fiction site, with short multi-part adventures written by Gross, Cunningham and others, featuring characters from the novels.