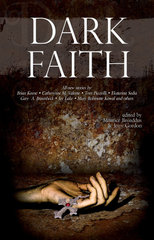 [Hell] doesn’t exist, no more so than the entities that are called Satan and the Devil.  They’re all…storybook constructs…Know this: there is no such thing as a ‘cosmic evil.’ Evil is a human matter, fashioned by ignorance, brutality, addiction, emotional trauma—the list is endless. The cosmos doesn’t feel anything, it is just a space, it doesn’t care about either good or evil, it is simply, like Heaven, indifferent.

“For My Next Trick I’ll Need a Volunteer” by Gary A. Braunbeck

That pretty much sums up my personal view of a universe indifferent to ongoing human folly.  That said, I’m fascinated by the notion of faith and its ethical implications, so a short story collection entitled Dark Faith co-edited by Maurice Broaddus and Jerry Gordon naturally got my attention. People rely on faith to provide an orderly framework to their lives, to infuse meaning to their existence. What these  stories (as well as several poems) share is a consideration of what happens when the assumptions that underpin faith unravel. For the most part, the results are not good

The opening story, “Ghosts of New York” by Jennifer Pelland, considers the afterlife of those who made the horrific choice to jump from the Twin Towers rather than remain in a burning buidling about to collapse. The whole subgenre of 9/11 fiction is tricky, given  our collective memory of something so frighteningly incomprehensible that’s been trivialized over time with the endlessly surreal replaying loop of the imploding skyscrapers, but Pelland’s take here is vividly disturbing in suggesting that memorializing the dead can make matters worse.

Poets and sages like to say that there is clarity in certain death. That a calm resignation settles over the nearly deceased, and they embrace the inevitability of the end of life with dignity and grace.

But there was no clarity for her, no calmness, no life flashing before her eyes in a montage of joy and regrets.  There was just pure animal terror, screams torn from her throat as she plummeted toward the ground in the longest ten seconds of her life.

And then there was an explosion of pain.

That pretty much sets the tone for what is mostly a grim (with a few humorous exceptions) contemplation of human existence, particularly the violent end of it.

While Broaddus says he “invited horror, science fiction, and fantasy writers to riff on the idea of faith,” the predominant genre here is horror. I’m not much of horror fan, particularly the Lovecraftian variety (though in admitting the latter I perhaps risk keeping my regular blogging spot here amongst a crew of  classic pulp idolators), but even I enjoyed some of the more outright stomach turning tales, as well as those clearly rooted  in tradition but that did more than just repeat genre cliches.  Lucian  Soulban’s “The Choir” is probably the most reminiscent of Lovecraft, set during World War II involving combat veteran soldiers beset by a slimy menace in the hold of a transport ship.  The twist here is that despite their brave and meritorious service for their country, these soldiers are being shipped out because they were discovered partaking in homosexual behavior and that whoever has unleashed these beasts may not be the same enemy they’ve been fighting. The last line is well worth the voyage.

Similarly, the archtypical mythological human maiden impregnated by a god is as old as, well as old as mythology (and a variant of which is a core belief of Christianity), but, in “Ring Road,” Mary Robinette  Kowal’s Nordic retelling is particularly chilling.   In “The Days of Flaming Motorcycles,” Catherynne M. Valente adds some poignancy to the generally misunderstood plight of zombies.

I was particularly interested in stories that visit the endlessly entertaining conundrum of how does a supposedly “good” omniscient supreme being allow evil.  Some of the stories are somewhat obvious, such as “I Sing a New Psalm” by Brian Keene, which portrays the violent reaction of a man of uncertain faith to the death of his pious wife in childbirth,  to the wondrous strange confabulation of the final moments in the life of Jesus and mobster Dutch Schultz mystically portrayed in a short film that compels viewers to commit suicide,   The Last Words of  Jesus Christ” by Nick Mamatas.

One of the more troubling notions of fundamentalist Christianity is the idea that God accepts into Heaven only those who place their faith in Jesus. Even Billy Graham, bless his soul, is on record saying the he can’t accept the precept that the many good and moral people of other faiths he’s met could be condemned to eternal fire simply for not being Christian. Should that be the case, nevertheless, Douglas F. Warrick predicts a way to endure, and ultimately triumph, over such unfair punishment in “Zen and the Art of Gordon Dracht’s Damnation.”  The further dangers of misplaced faith are depicted in “The Mad Eyes of the Heron King” by Richard Dansky, “Imposters, traitors fools..We do not suffer them gladly” (125).  And for those on Earth who maintain a holier than thou attitude because of their one and only “true faith,” Lucy A. Snyder has a suitable bawdy response in “Miz Ruthie Pays Her Respects.”

In “Go Tell It on the Mountain,” Kyle S. Johnson portrays a Jesus that is as clueless as the rest of us.  “He Who Would Not Bow” by the aptly named Wrath James White  depicts a human rebellion against the wrath of God that doesn’t work out in Miltonic fashion.  Which is perhaps why the seemingly autistic girl in being reawakened pointedly rejects the priest who attends her in Chesya Burke’s “The Unremembered.”

Oddly, the anthology ends on an up note in “For My Next Trick I’ll Need a Volunteer,” which combines sarcastic banter between the two main characters in a case of applied quantum physics in rerouting the multiple realities of an uncaring universe.  It even has a happy ending.

Table of Contents:
Introduction by Maurice Broaddus
“The Story of Belief-Non” by Linda D. Addison (poem)
“Ghosts of New York” by Jennifer Pelland
“I Sing a New Psalm” by Brian Keene
“He Who Would Not Bow” by Wrath James White
“Zen and the Art of Gordon Dratch’s Damnation” by Douglas F. Warrick
“Go and Tell It on the Mountain” by Kyle S. Johnson
“Different from Other Nights” by Eliyanna Kaiser
“Lilith” by Rain Graves (poem)
“The Last Words of  Jesus Christ” by Nick Mamatas
“To the Jerusalem Crater” by Lavie Tidhar
“Chimeras & Grotesqueries” by Matt Cardin
“You Dream” by Ekaterina Sedia
“Mother Urban’s Booke of Dayes” by Jay Lake
“The Mad Eyes of the Heron King” by Richard Dansky
“Paint Box, Puzzle Box” by D.T. Friedman
“A Loss For Words” by J. C. Hay
“Scrawl” by Tom Piccirilli
“C{her}ry Carvings” by Jennifer Baumgartner (poem)
“Good Enough” by Kelli Dunlap
“First Communions” by Geoffrey Girard
“The God of Last Moments” by Alethea Kontis
“Ring Road” by Mary Robinette Kowal
“The Unremembered” by Chesya Burke
“Desperata” by Lon Prater (poem)
“The Choir” by Lucien Soulban
“Days of Flaming Motorcycles” by Catherynne M. Valente
“Miz Ruthie Pays Her Respects” by Lucy A. Snyder
“Paranoia” by Kurt Dinan (poem)
“Hush” by Kelly Barnhill
“Sandboys” by Richard Wright
“For My Next Trick I’ll Need a Volunteer” by Gary A. Braunbeck