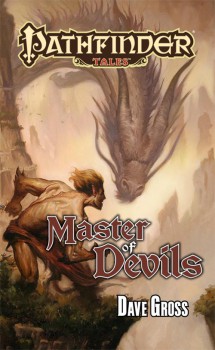 Pathfinder’s new line of novels are making a good impression among fantasy readers, accessible as they are to fans of Paizo’s game world and the uninitiated alike. If you are not familiar with Pathfinder it is essentially Dungeons & Dragons 3.5, but with its own world that differs from existing D&D settings in various ways both large and small. The world of Golarion itself actually predates Pathfinder as a game system, and the wealth of detail and world-building that have gone into making it a fully-fleshed environment is impressive. And, while there are scads of Pathfinder supplements available at the time of this writing, the fiction end of things for Golarion is just getting started — Master of Devils representing the fifth novel set in the Pathfinder world.

Dave Gross has quickly distinguished himself as the go-to guy for Pathfinder fiction (be sure to check out Black Gate’s interview with him), having written two novels and co-written another, as well as having penned numerous Pathfinder Tales short stories available free at Paizo’s website, he has been fairly prolific. Gross’s signature characters are the adventuring duo Count Varian Jeggare and his bodyguard Radovan, a classically counter-balanced odd couple whose tales are told in alternating first person segments, allowing for the voice of the characters to emerge in interesting ways.

Master of Devils sees the pair in Tian Xia, Golarion’s equivalent of a politically-fragmented Ancient China, a realm as mysterious to the inhabitants of the continent of Avistan, from which Jeggare and Radovan hail, as it is to fans of the Pathfinder game, which has produced very little material on Tian Xia. Gross shows what he can do with this blank slate and admirably fills the gaps in the Pathfinder record with all manner of appealing details that bring the realm of the far east to life.

Sent by the Pathfinder Society — an organization of explorers, scholars, and adventurers in which Jeggare holds the rank of Venture-Captain — to the other side of the world to recover the husk of a celestial pearl, things go wrong for the pair from the word go. Attacked by bandits and separated, Jeggare and Radovan follow distinct paths through the remainder of the novel — paths that, unknown to them, will converge at a mysterious ceremony on Iron Mountain, at the very Gates of Heaven and Hell.

Gross has light-heartedly referred to Master of Devils as  “Radovan and the Count vs. Every Kung Fu Movie Ever” and with good reason. Both characters find themselves in a role that is a staple of such films, as students of arts both esoteric and powerful. For Jeggare this means a humbling stint as an apprentice at Dragon Temple, but for the hellspawn Radovan it means the cruel tutelage of a sorcerer monk known as Burning Cloud Devil.

Radovan — streetwise foil to the aloof sophistication of his employer Count Jeggare — finds himself permanently fixed in his ‘devil shape’ by the revenge-fueled Burning Cloud Devil and led down a road of violence and blood. In a series of episodes in which he must fight colorful characters with names such as the Green Marsh Wrestler and the Moon Blade Killer, as well as a drunken holy man, a ‘twined’ female paladin, and a pair of deadly seamstresses, Radovan masters various fighting techniques but slowly loses himself to evil. Fans of Chinese cinema will find plenty of homages here, and Gross is to be commended on his handling of ideas that could come across as dangerously outlandish, but instead result in delicious fun. Not only do they work in terms of the story, but they also manage to fit nicely into the universe of Pathfinder and Dungeons & Dragons — no mean feat for an author juggling such disparate influences and demands.

Alternating chapters keep the reader flip-flopping between characters in an effect that only enhances Gross’s very readable and action-filled story — only rarely did I feel that the alternating scheme led to chapters in which little happened to advance the plot. Probably these occurred more in the Count Jeggare storyline which, despite that criticism, was probably my favorite of the book. The aristocratic Jeggare finds himself truly humbled as he takes place in Dragon Temple’s rigorous training, all of which is building up toward the ceremony on Iron Mountain in which the heart of an immortal dragon will be exchanged with that of a moral princess. The dragon’s heart is the celestial, wish-granting pearl the husk of which Jeggare has been sent to recover, and the princess herself seems to be in danger of assassination on the grounds of Dragon Temple. Add in a powerful eunuch, a few secret identities, a novel form of magic based on calligraphy, and a potent blade called the Shadow Sword, and things get complicated fairly quickly.

And this time around Jeggare’s and Radovan’s first-person sections are joined by a third, that of the dog Arnisant, first introduced in Prince of Wolves. While I admit to being initially not-too-crazy about the idea of first person narration from a dog, Gross makes it work brilliantly — especially in terms of the setting. Arnisant’s sections read like a Chinese beast fable, and are full of weird and fabulous creatures and spirits. In fact, each of the narrative sections of Master of Devils capture a particular aspect of far eastern storytelling and play with themes and tropes in different ways. More so than in any of his previous Pathfinder tales, Gross manages to fuse his brand of fast-paced fantasy with an unconventional narrative structure to create something that feels familiar and fresh at the same time.

In Master of Devils Dave Gross has produced a fine novel of adventure fantasy with an eastern flavor, and one that is accessible to any fantasy fan. As Pathfinder’s fiction line continues to flourish, I expect to see Gross’s creations at the forefront of the brand, and look forward to reading more of the adventures of Radovan and Jeggare. That is, once I’ve watched the thirty or so kung fu movies I just inexplicably added to my Netflix queue….

[…] previously reviewed the Pathfinder Tales novels Death’s Heretic by James L. Sutter, Master of Devils by Dave Gross, and Howard Andrew Jones’ Plague of Shadows, and introduced you to BG […]