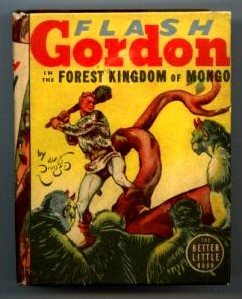 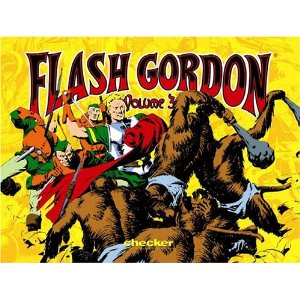 “The Forest Kingdom of Mongo” was the eighth installment of Alex Raymond’s Flash Gordon Sunday comic strip serial for King Features Syndicate. Originally printed between October 25, 1936 and January 31, 1937, “The Forest Kingdom of Mongo” picks up the storyline where the seventh installment, “The Undersea Kingdom of Mongo” left off with Flash, Dale, and Zarkov winging their way to Prince Barin’s kingdom when they are ambushed by Ming’s air fleet. Their rocket ship is shot down and crash lands in an unknown forest near Mount Karakas. Ming orders Lu Chao, the commander of the air fleet to recover Flash’s body while Flash, an injured Zarkov, and an unconscious Dale stagger off into the forests.

Flash and Zarkov seek shelter in a nearby cave where Dale recovers consciousness. Lu Chao and his fleet arrive at the scene of the crash to discover the stolen rocket ship has been consumed by flames. Taking no chances that Flash might have survived, Lu Chao orders his men to set fire to the forest before they depart leaving the trio cut off by flames at every turn.

Flash, Dale, and Zarkov flee before the flames. Entering a clearing they come upon a number of prehistoric beasts who are also fleeing the spreading forest fire. Flash scrambles up a tall tree and spies a nearby river. The trio takes to the water clinging to a felled tree when a carnivorous ursodile surfaces and approaches them. 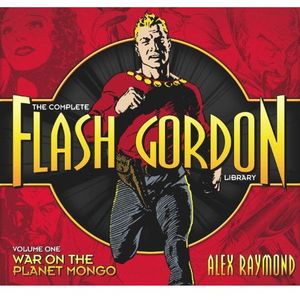 Thinking quickly, Flash breaks off a branch from their floating tree and dives into the water to tackle the ursodile head on. As the creature lunges for the kill, Flash jams the branch between its jaws, rendering it helpless. Reuniting with Dale and Zarkov, the trio sees they are completely cut off from coming ashore by the raging fire. Lu Chao reports to Ming that no one could have survived the forest fire and the rocket ship’s explosion. At long last, Flash Gordon is dead.

Ming has Lu Chao knighted for killing Flash Gordon. Ming broadcasts the news of Flash’s death across Mongo via radio. Prince Barin and Princess Aura take the news very badly. Barin commands Captain Truno to find their bodies so he can give his friends a proper burial. Meantime, Flash is managing to bandage Zarkov’s wounded arm while Dale is heartened to see the forest fire is beginning to die down at last.

Coming ashore, the trio makes their way to Mount Karakas when they are startled to see birds and small mammals fleeing. The source of the panic soon becomes apparent as a swarm of mad squirlons from Mount Karakas descend upon them. They climb a tree as Flash and Zarkov arm themselves with branches to beat off the dangerous mammals whose bite is fatal.

Realizing their makeshift cudgel and spear will not hold the squirlons off for long, Flash uses his laser pistol to set fire to a nearby dead tree. The smoke and flames succeed in driving the squirlons off, but not before Zarkov is bitten. Dale sets out to cut the wound open and drain the venom before it reaches Zarkov’s bloodstream. 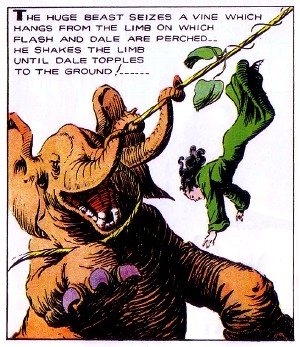 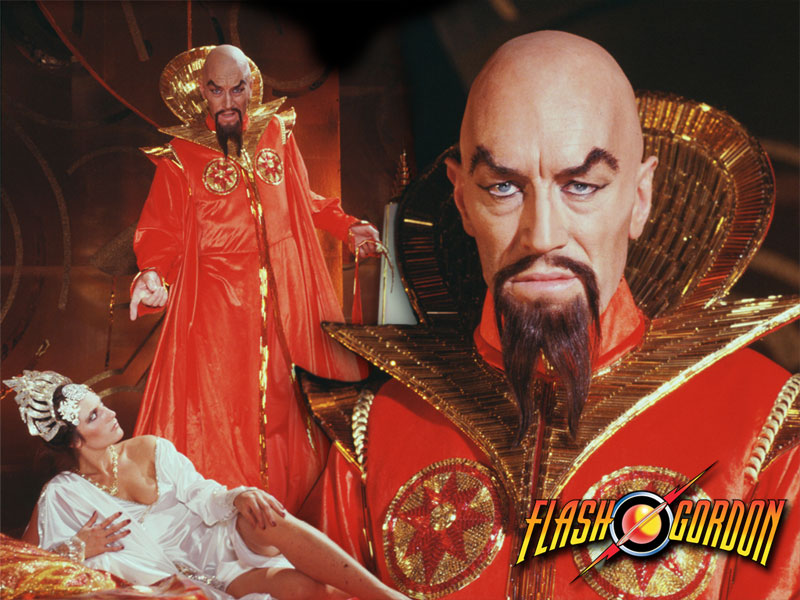 The first stage of infection from the squirlon bite is madness and Zarkov is soon taken with paranoid delusions that Flash and Dale are trying to harm him. He leaps from the tree, screaming that he is burning up inside and rushes in the direction of the river. Flash and Dale watch helplessly at their old friend’s predicament, knowing there is nothing they can do to help him.

Captain Truno and his squad find Zarkov being ravaged by squirlons in the forest. They gas the squirlons and treat Zarkov for both the squirlon bites and the gas. As he recovers consciousness, Truno interrogates him. Zarkov confirms his identity, but in his delirium believes that Flash and Dale perished in the fire. Truno returns with Zarkov believing that Flash and Dale’s bodies were incinerated.

Truno’s men communicate with Prince Barin via drum signals. Prince Barin receives the report that Zarkov is the only survivor. Meantime, Flash and Dale are able to climb down from their tree now that the squirlon swarm has been dispersed. Flash spears fish in the river for Dale to cook them dinner while Flash prepares a crude bed of sticks for her and lights a fire. Night falls with Flash standing guard over Dale while she sleeps.

The next morning, Flash and Dale set out on Zarkov’s trail. The trail ends at the lake. Flash and Dale begin wading through the water, but soon realize they have taken a wrong turn and are lost in a swamp. Dale falls into quicksand. Flash struggles and successfully pulls her free only to become trapped himself. Dale ties a heavy stone around a strong creeper and throws it to Flash. He manages to crawl his way out of the quicksand.

Making their way through the forest, they come upon a stampeding elephantine magnoped. The duo seeks refuge in a tree, but the magnoped rams the tree, knocking Dale to the ground. Flash swings to the rescue on a creeper, shooting the creature with his laser pistol. The magnoped’s trunk knocks Flash to the ground and the creature prepares to trample him beneath its massive feet.

Just as Flash and an unconscious Dale are about to be trampled to death, the magnoped is hoisted off the ground by a giant Venus flytrap which quickly devours the elephantine beast. Flash lifts Dale and attempts to escape, but the carnivorous plant’s tendrils capture Flash next. Dale recovers consciousness in time to see Flash being pulled toward the Venus flytrap’s gaping maw.

A terrible storm kicks up without warning. Thinking quickly, Dale locates Flash’s laser pistol and attempts to shoot Flash free, but the plant’s tendrils capture her before she is able to act. Lightning strikes the Venus flytrap, freeing Flash and Dale and destroying the monstrous plant. Drenched in the pouring rain and assailed by the strong winds, Flash and Dale embrace as Dale declares, “What is life compared to a love like ours?” as the episode reaches a stirring finale. Alex Raymond’s artwork throughout is simply stunning. He matured quickly as an artist and he and writer Don Moore were reaching their peak with the series leaving readers eager for the following Sunday’s installment.