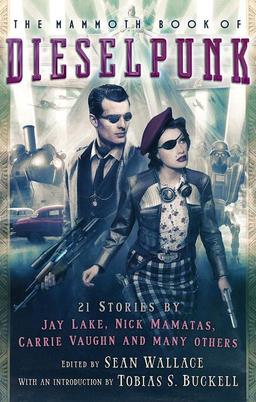 What the heck is Dieselpunk?

Sean Wallace gave an enticing description of this funky new sub-genre in his call for submissions for The Mammoth Book of Dieselpunk last year:

If you need to know what dieselpunk is, it’s a subcategory of steampunk, essentially, covering the 1920s through the 1950s, including the Roaring Twenties, the Depression, World War II, and even a little beyond that, but here’s the thing: I want material from all over the world, I don’t want a white-washed representation of this theme.

The book is scheduled to be published in July, and I have to say, it looks pretty good. Packed with stories by Genevieve Valentine, Carrie Vaughn, E. Catherine Tobler, Nick Mamatas, Jeremiah Tolbert, and many others, it could be a lot of fun.

Dieselpunk: an emerging retro-futuristic sub-genre, similar to steampunk, based on the era between the First World War and the start of the Atomic Age, merging elements of noir, pulp, and the past with today’s technology… and sometimes a dash of the occult.

Award-winning editor Wallace presents a cutting-edge collection of twenty-five vibrant stories that explore the possibilities of history while sweeping readers into high-powered hydrocarbon-fuelled adventures. Join us in an era when engines were huge, fuel was cheap and plentiful, and steel and chrome blended with the grit and grease of modern machines.

“The Little Dog Ohori” by Anatoly Belilovsky
“In Lieu of a Thank You” by Gwynne Garfinkle
“Cosmobotica” by Costi Gurgu & Tony Pi
“Blood and Gold” by Erin M. Hartshorn
“Thief of Hearts” by Trent Hergenrader
“Rolling Steel: A Pre-Apocalyptic Love Story” by Jay Lake & Shannon Page
“Black Sunday” by Kim Lakin-Smith, Cyber Circus
“Act of Extermination” by Cirilo S. Lemos, translated by Christopher Kastensmidt
“We Never Sleep” by Nick Mamatas
“Into the Sky” by Joseph Ng
“Tunnel Vision” by Rachel Nussbaum
“Dragonfire is Brighter than the Ten Thousand Stars” by Mark Philps
“Floodgate” by Dan Rabarts
“Mountains of Green” by Catherine Schaff-Stump
“Vast Wings Across Felonious Skies” by E. Catherine Tobler
“Instead of a Loving Heart” by Jeremiah Tolbert
“The Wings The Lungs, The Engine The Heart” by Laurie Tom
“Steel Dragons of a Luminous Sky” by Brian Trent
“This Evening’s Performance” by Genevieve Valentine
“Don Quixote” by Carrie Vaughn
“The Double Bind” by A.C. Wise

Sean Wallace’s ongoing projects include The Dark magazine (co-edited with Jack Fisher) and Clarkesworld (co-edited with Neil Clarke). We’ve covered several of his recent anthologies, including:

See our complete survey of the top releases in May here, and all our articles on upcoming releases here.

I must be the only one on the planet who doesn’t get steampunk, or its variations. Retro-feel sci-fi, written in modern times?