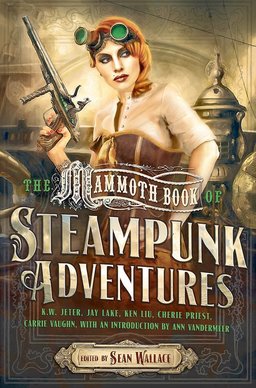 The book was a solid success and no publisher can resist success. So it should be no surprise that the sequel, The Mammoth Book of Steampunk Adventures, is scheduled to arrive next month here in the US (it’s already on sale in the UK).

Our very own C.S.E. Cooney contributes a reprint, her marvelous tale “Canary of Candletown,” from Steam-Powered II. Ann VanderMeer provides the introduction.

Sean Wallace is also the editor of the upcoming The Mammoth Book of Warriors and Wizardry, a very promising sword & sorcery collection with a story reprinted from Black Gate (Matthew David Surridge’s “The Word of Azrael”), as well as contributions from James Enge, Chris Willrich, Aliette de Bodard, Mary Robinette Kowal, N.K. Jemisin, Saladin Ahmed, and many others.

I’m a big fan of these Mammoth anthologies. They’re attractive, well edited, and a great value for the money. Keep your eye out for this one.

Introduction by Ann VanderMeer
“Smoke City” by Christopher Barzak
“Memories in Bronze, Feathers, and Blood” by Aliette de Bodard
“Love Comes to Abyssal City” by Tobias Buckell
“Canary of Candletown” by C.S.E Cooney
“On the Lot and In the Air” by Lisa L. Hannett
“Beyond Calais” by Samantha Henderson
“La Valse” by K.W. Jeter
“The Colliers’ Venus (1893)” by Caitlin R. Kiernan
“Benedice Te” by Jay Lake
“Good Hunting” by Ken Liu
“Selin That Has Grown in the Desert” by Alex Dally MacFarlane
“The Curse of Chimère” by Tony Pi
“Tanglefoot” by Cherie Priest
“Ticktock Girl” by Cat Rambo
“Edison’s Frankenstein” by Chris Roberson
“The Governess and the Lobster” by Margaret Ronald
“I Stole the D.C.’s Eyeglass” by Sofia Samatar
“The Clockworks of Hanyang” by Gord Sellar
“The Return of Cherie” by Nisi Shawl
“Five Hundred and Ninety-Nine” by Benjanun Sriduangkaew
“Green Eyed Monsters in the Valley of Sky, An Opera” by E. Catherine Tobler
“Harry and Marlowe and the Talisman of the Cult of Egil” by Carrie Vaughn
“Terrain” by Genevieve Valentine
“A Mouse Ran up the Clock” by AC Wise
“Anna in the Moonlight” by Jonathan Wood

The Mammoth Book of Steampunk Adventures will be published October 7, 2014 by Running Press. It is 512 pages, priced at $14.95 in trade paperback and $9.99 for the digital edition.