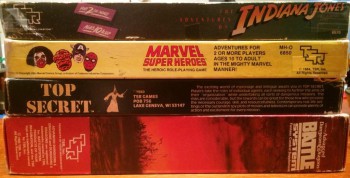 Considering the fact that James ‘Grognardia’ Maliszewski is one of my office mates here in Black Gate L.A., I’m often inspired by what he has to say on the subject of gaming.  Now sure, James comes at the hobby from a more mechanics angle, while I take on the artistic side, but nonetheless, we are still cut from the same cloth and overlap on many details [he’s two years older than me, so MUCH wiser].

After reading his The Golden Age article this week, I couldn’t help but find an odd pleasure in the fact that I too was revisiting my gaming past, only once again from a different angle.

So, when he posted his image of the ‘treasure’ found at his ancestral home, I couldn’t help but smile because I’d just taken a picture similar to it myself the day before.  You see, James, according to the article, was enjoying the nostalgia of his TSR collection in his visual framing, but for me, I was working toward the reality of parting ways with mine.

Over the past three weeks, I’ve been selling off parts of my RPG collection.  It began as a quest to raise capital for other projects, but as it continued, it turned into a kind of cathartic shedding of unneeded pounds.  Last year, I wrote an article for Black Gate entitled The Weight of Print, and over the past weeks I’ve toted at least a hundred pounds of books to the USPS from my RPG shelves.

It is an amazing process, and often reminds me of selling off the bulk of my comic collection in 2009.  What had once been 15 long boxes of unread comics, turned into 5 upon my move from Maryland to California, and in July of this year I sold another 2 long boxes without so much as an ounce of mental strain.  Even just two months later, I bet I could drag out my three remaining long boxes and shed another one and a half boxes without batting an eye. 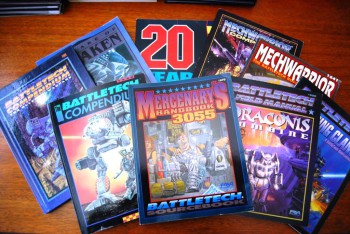 You see, the more you purge, the more you realize how nice it feels to be ‘weightless’.  I’ve done the same thing with my RPGs this time around.  Looking over the collection as a whole, I picked the absolute ‘fringe’ stuff and then sold it.  After a week, I looked again, and discovered that I had a new round of ‘fringe’ stuff I wanted to sell.  This continued until I started to piecemeal larger collections, shedding lesser used supplements and keeping only the ‘must haves’ from the core systems.

Not surprisingly, those ‘must haves’ also lose their shine when I look back on them during the next round.  So went much of Battletech, Shadowrun, Legend of the Five Rings, 2nd Edition AD&D, 3rd Edition AD&D, Rifts, Eberron, Al-Qadim, Starship Troopers, Alternity, Serenity, and Darksun, until I have finally pulled down those old TSR boxes like James and am saying goodbye to Top Secret, Indiana Jones, Marvel Super Heroes, and Battle System [sorry Murph].

It is a process that can be hard going, but when I look into the mirror, I have to ask myself ‘Why?’.  Why do I need these books?  A part of me thought I was keeping them for my son, now eight, but that is a hollow sham.  I’m certain most parents realize at some point that the stuff they keep, and are sure their children will want, really has little value to the next generation.

Kids, however, don’t usually want your old stuff; they want their own stuff, even if within the same hobby.  I mean, even if Ash became a huge gamer, would he really be going to my wall and asking if he could borrow 1st Edition Shadowrun?  I doubt it.  I mean, the game was based on Bladerunner which was taken from a story that is set in 2019, when he’ll be 13!  Shadowrun itself has a history that begins with the Virally Induced Toxic Allergy Syndrome (VITAS) that sweeps over the world in… wait for it, November 2010!  Heck, the first dragon is spotted on December 24th 2011.  I mean, is he hot to play a game where deckers use ‘decks’ the size of standard keyboards to hack computer networks [not yet referred to as the Internet because that had yet to come into existence when this game was created].  How can this be cool when my cell phone has more computing power than anything listed in the manual?

He will most certainly have his own generation of great geek movies and movements to fuel his imagination, so why would he want D20 Starship Troopers or even [heaven forbid] Serenity?  How about a spy thriller like Top Secret with bellbottoms, groovy long hair, and computers the size of bedrooms?  Maybe he’d be keen on Marvel Super Heroes drawn by Steve Ditko?  Or how about any edition of D&D besides whatever he can currently purchase at B&N?

The writing on the wall is that all of the above are very unlikely scenarios.

So that leaves the possibility that I’ll play them myself, which is of course, ludicrous.  I’m O-L-D, and tired, and I’ve got a learning curve that is hindered by old dogs and new tricks.  I like what I like, and I don’t have too much patience to be learning, or re-learning, old rules or old settings when it is so much easier [and more fun] for me to make up my own stuff while using comfortable mechanics I know by heart, ala 1E AD&D, Pathfinder, or Savage Worlds. 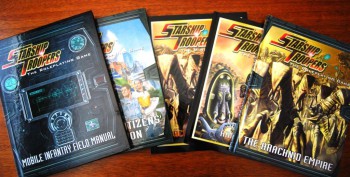 No, the real reason I’m keeping this collection is because of me, and I don’t even play RPGs but once a year when I go home to Indiana.   It then becomes something of a mental illness to keep them, a delusion that they are bringing me something they are not, which is inferred happiness by proximity.  I’d say in reality they are more loadstones than spiritually uplifting, and yet even with such a realization, I can’t help but keep some things.  Star Frontiers, which I only played for one campaign in 1989 and yet love it like a family pet, Robotech because it is part of my soul, 1st Edition AD&D because I still play it each year, and Middle-Earth Role-Playing because Tolkien’s universe is the absolute bomb.

Anything else, well I suppose I keep them around for the artwork, and there is plenty of that, which I just can’t part with… yet.  Time will tell, I suppose, and with another round of books going up on eBay by the time you read this, I’m sure there will be more on the chopping block soon, so watch out Gangbusters, Boot Hill, and Star Fleet Battles!

I’ve been accused of blasphemy by more than one person, but during the last 5 or so years I’ve sold, given away or donated at least 30 large boxes of books, games, comics, etc. Now I’m down to 2 boxes for what’s left, mostly signed copies or ancient, out-of-print stuff that would be difficult to replace.

Part of it was I got tired of lugging around all those heavy boxes every time I moved. What cinched it was one day I thought, “How much of this stuff am I ever going to read again? And if I did want to read it, how hard would it be to find?” The answers? “None and Easy.”

“Weightless” is a good term for it. I’ve actually found it freeing, more so than I could have ever imagine.

Oh, I still buy plenty of printed material, but most of it ends up being sold or donated after I’m finished with it.

There’s a lot of truth here. If i ever move again i’ll probably do the same thing. My cousin and i have almost every 3.5 hardback book (which lives at my house and i had to move it all two years ago).

If 5th edition works out I probably won’t use most of those books ever again, I’ve hardly used them anyway.

I still have hope that i’ll be able to run an Eberron game where all the players actually know the setting. Same thing goes for Dragonlance.

The part about your kid really hits home and my son isn’t even 1 yet! It will be more fun to see what your kid gets into and then share that with him.

Ty: Great comment! And agreed, its not that I’m DONE with RPGs, Books, or the like, I’ve just entered a place where I am much more discerning about what I really need to keep and why I need to keep it.

Glenn: I thought the same thing once I decided I’d give 5th Edition a try. It also makes me wonder about my Pathfinder collection and what worth it has to me if I convert to 5th. BTW, I’m still trying to sell my 3E collection and haven’t had any takers which makes me wonder if it is actually worth anything these days.

Yep, I’ve had a great time with my son discovering Pokemon, new Lego sets, Avatar the Last Airbender, and I’m sure many more to come. It is part of the parenting experience, and I think it kind of help you stay young. 🙂

James: Preachy?! I’ve written AotG for 5 years here on Black Gate and have rarely been paid such a kind and thoughtful compliment, so thank you. 🙂