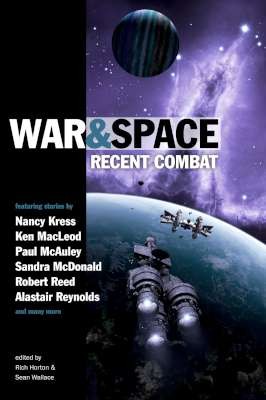 My copy of War & Space: Recent Combat finally arrived today, and it’s everything I hoped it would be: a thick anthology reprinting some of the best tales of space warfare from the last few decades, including one of my recent favorites, Ken MacLeod’s tale of a man who investigates a civilization implosion in a far-distant human habitat and the startling horrors he discovers, “Who’s Afraid of Wolf 359?” Here’s the opening lines:

When you’re as old as I am, you’ll find your memory’s not what it was. It’s not that you lose memories. That hasn’t happened to me or anyone else since the Paleocosmic Era, the Old Space Age, when people lived in caves on the Moon. My trouble is that I’ve gained memories, and I don’t know which of them are real.

Exactly the kind of book I like to snuggle into my big green chair with. (Side note to website editor C.S.E. Cooney: yes, I ended a sentence with a proposition. Give me a break, it’s Friday). Here’s the book description:

Conflict: a basic human instinct, helping humankind evolve even while threatening the very existence of the species… an instinct that will be as much a part of the future as it is now and always has been. For all the glories of war-the defeat of evil, the promise of freedom, justice, protection of the innocent, the righting of wrongs, technological innovation, heroism-there are also the horrors: individual grief, mass destruction, the elimination of entire cultures and great achievments, injustice, villainy, the annihilation of the innocent, and pain beyond bearing. War and Space offers the ultimate speculation on the future of warfare-stories of insectoid anguish, genetically-engineered diplomats who cannot fail, aliens plundering humanity, a weaponized black hole-scenarios of triumph and defeat, great heroism and vile depravity… and more.

Really, I would never trust any editor, website or otherwise, who believed there is or ever was any issue with ending a sentence with a preposition.

I remember a syndicated grammar columnist, The Red Pencil, that gently made fun of a question regarding that “rule.” But even further back, I remember my grandmother telling me, back in the 1980s when I was in college, about Winston Churchill’s quote about this so-called “rule”, “That is a rule up with which I will not put.” (Although The Oxford Companion to the English Language states that the original actually was, “This is the sort of bloody nonsense up with which I will not put.” And there is some question as to whether it was actually Churchill who said it.)

I was thinking of that old Churchill story when I wrote that aside to Claire. But I never knew if it was true or not!

And my grandmother had actually been a high school English teacher!

As a non-prescriptivist myself, I still don’t believe it’s a valid “rule of English”–whatever one may mean by that–but to be fair to those who do, while Churchill, or whoever, was attempting to demonstrate the inelegant lengths one might sometimes have to go to in order to abide by the rule, that sentence could easily be re-written as, “I will not put up with that rule.”

The preposition rule and the split infinitive rule both derive from the personal, self-contradictory, and generally odd personal preferences of Bishop Robert Lowth (1710-1787). Considering that “[H]is examples of false syntax were culled from Shakespeare, the King James Bible, John Donne, John Milton, Jonathan Swift, Alexander Pope, and other famous writers” in his original text on grammar, I’m not inclined to take his rules too much to heart. I’d rather be wrong with Shakespeare and Donne than right with the Bishop of London.

Oh, yeah, and there’s this cool anthology about war and space out. Didn’t know it had Catherynne Valente in it. Will definitely be picking this one up.

Leave it to me to check my links and quotations compulsively, then leave a glaring error in my own words.

It can’t be that glaring, because I read your comment twice and I don’t see it. 🙂