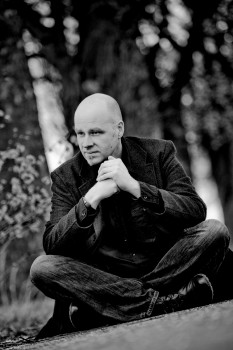 While I was looking for more authors of modern Arabian fantasy, Kai Meyer found me, after reading part of my series here on Black Gate. Already a bestselling author in English (his book, The Water Mirror, went into three printings before its release date), he’s written 51 novels in his native German, including the Middle Eastern influenced, The Stormkings, a trilogy which has not been translated into English… yet. After hearing the description, I’m hoping it will be. The film rights have already been acquired by Oliver Scholl, who has worked on movies such as Independence Day and Jumper.

It’s interesting to note that the Arabian trend isn’t confined to English language fantasy, and it’s very interesting to hear the direction Kai took the genre when he created a Middle Eastern milieu.

An Interview with Kai Meyer

Conducted and edited by Emily Mah, May, 2012

Emily Mah: Can you give us a synopsis of your works set in the Middle East?

Kai Meyer: The trilogy is called The Stormkings – or Die Sturmkönige in German. The books were published over here in 2008 and 2009, in six months intervalls. I had written the complete trilogy in one piece, all 1300 or 1400 pages of it, and was finished with the final novel when the first one came out. So readers could be sure they wouldn´t have to wait for five years until the final book would arrive.

The story is set in the ninth century, during the reign of Harun al-Raschid. But it´s not a historical novel at all – actually I invented a kind of post-apocalyptic Orient. Five decades ago the jinn came out of the deserts, killed millions and enslaved the rest. Only a few cities are still unconquered. The first novel is the story of a journey from Samarkand to Baghdad, 1200 miles through the wasteland. Essentially it´s Mad Max on magic carpets. The hero, Tarik al-Jamal, was once the best smuggler on the sky routes of the Orient. No one rode a magic carpet like him – until he lost his love, Maryam, out in the desert, the “jinnland”, as people now call the deserts between Samarkand and Baghdad. Broken and lonely he now makes a living from illegal carpet races through the old town of Samarkand. But when his estranged younger brother Junis wants to lead an escaped slave girl, Sabatea, to Baghdad, Tarik fears for their safety and decides to dare one last journey through the desert and face the ghosts of his past. But out in the wastes they not only have to fight the creatures left over from the Jinn Wars, but also meet the Stormkings, guerilla fighters who ride on huge tornadoes through the desert. And that´s just the beginning. The story opens up considerably when Tarik, Sabatea and Junis arrive in Baghdad at the end of the first book.

What inspired you to set your novels in the Middle East?

I grew up in the Seventies and Eighties and watched all the old Oriental adventures on television over and over again. On Sunday afternoons you could see the 1940 Thief of Baghdad, the Harryhausen Sinbad movies or films like The Golden Blade with Rock Hudson. In Germany we also had an animated weekly Sinbad series from Japan, which I absolutly loved as a kid. And I remember seeing the Seventies version of Thief of Baghdad at my local cinema; it was a TV production in the US, I think, but in Europe it was distributed theatrically. 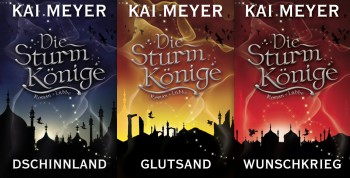 All of those lead me to read tales from the Arabian Nights at quite a young age. I also had a collection of audio dramas on vinyl records at the time, Sinbad, again, but also stories like The Flying Horse and others from the Arabian Nights. Actually I did The Stormkings for a similar reason I had worked on my pirate trilogy The Wave Walkers, which came out in the US and UK in 2007 and 2008, but was written before the Johnny Depp movies made pirates hot again; in Germany, The Wave Walkers was published in 2003. As a child I loved classic pirate movies, so I decided to write my own.

How did you go about researching the region and culture?

With books. I don´t speak any Middle Eastern languages, so all my research was done in German and in English. For example, I found a book from 1970, The Topography of Bahgdad in the Early Middle Ages, by Jacob Lassner, which became essential for my understanding of the layout of Baghdad. But I guess the biggest influence on my versions of Samarkand and Baghdad were Leigh Bracketts Mars stories and her descriptions of the old Martian cities. I just adore what she did with those. 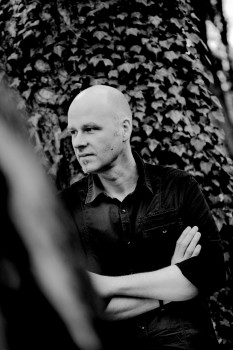 Do you read much fantasy in English, or translated from English, and do you ever find yourself influenced by trends in the genre?

I´m not reading as much fantasy as I used to. It comes with the job, I guess. It´s the classic thing: novelists tend to read a lot of non-fiction and less and less fiction. Actually, right now I began to read novels again, but mostly horror from the Eighties. It´s part nostalgia, part discovery of how great some of those authors were, people like Charles L. Grant and some of the others that never became really big in Germany. Most of them I read in English, some in German translations.

In German language fantasy, do you see the same trend of Arabian and Middle Eastern settings?

Not at all. Germany doesn´t have a long tradition in epic fantasy. We had one successful author of heroic fantasy in the Eighties, Wolfgang Hohlbein, but it didn’t become a trend until the Lord of the Rings movies came out. Suddenly publishers were looking for German authors writing novels about elves and dwarves, also because the physical size of American fantasy novels became bigger and bigger and translation costs escalated. All of that lead to a new group of writers becoming bestsellers with Tolkien inspired work, and some of them went on to create different kinds of fantasies after they became brand names. I never did Tolkienesque books – I actually started out in the early Nineties with historical novels and, at the time, had some successful and not so successful novels, until I began to write young adult books like the Wave Walkers and Dark Reflections trilogies. They became bestsellers, were translated into something like 25 languages all over the world, and I used this background to sell my publishers the idea of an adult Oriental fantasy.

Are there any specific stories or lore from the Middle East that captivated you?

I used bits and pieces from all over the Arabian Nights and tried to combine them to something new. Most of the stuff I just invented and gave it an Arabian flavour. The Stormkings is not The Seventh Voyage of Sinbad or something like this, it´s not a retelling of old stories. It´s a new story with a very different concept.

Did your research of the culture influence the magic system you created for your books?

There is no magic system, because part of the concept is something I called Wild Magic. Actually magic got out of control and ran amok. It´s Fukushima with magic instead of nuclear power. Nobody is able to use sorcery anymore because magic itself became an uncontrollable force. You don´t want to meet some of the creatures that came out of this catastrophe and are now living deep in the deserts.

Do you plan any other books set in the Middle East?

Not at the moment. Actually I put everything in those three books I could think of in regards to Oriental fantasy. The first book begins with an illegal carpet race at night in Samarkand – a bit like The Fast and the Furious on magic carpets – and it gets even stranger and more surreal after that.

Can you tell our readers about your latest works translated into English?

The new book is called Arcadia Awakens and was published as hardback and ebook by Harper Collins just a few weeks ago. It´s the first in another trilogy, this one set in Sicily in the present. It´s sold as a dark fantasy romance story, which might be one of the reasons why it became a bestseller here in Germany, but it´s definitely not Twilight or one of those. 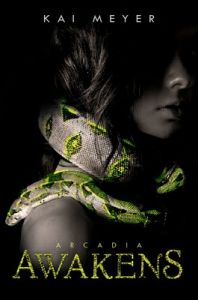 There is a Romeo and Juliette romance at the heart of it, two teenagers from enemy Mafia clans falling in love, but that´s only part of the plot. It´s based on the Ancient Greek myth of Arcadia and the first human shapeshifter of them all, King Lykaon, who was turned into a wolf by Zeus because he offered human meat when the god came for dinner. The underlying concept of the Arcadia novels is that the Arcadian Dynasties, ancient families of shapeshifters, are still in existence, some of them hiding under the disguise of Cosas Nostra clans.
The books are about the Mafia as much as they are about shapeshifting. I travelled all over Sicily to research them, besides reading many books on the subject, so it´s hopefully steeped in the atmopshere of the place: Gothic palaces in the Italian countryside, urban monsters like Palermo and Catania and, of course, the beauty of the Mediterranean Sea.

I have written fifty-one books by now, but I think some of the best work I ever did is in the Arcadia series. As much as The Stormkings was influenced by Leigh Brackett and early Moorcock, Arcadia came from my love for Italy, Seventies Mafia movies by directors like Damiano Daminai and Enzo G. Castellari and TV series like La Piovra (The Octopus) – all mixed with horror, of course.

One of the best things about blogging for Black Gate is getting to discover new writers I haven’t read before. Many thanks to Kai Meyer for contacting me!

You can read the other installments of The Best of Modern Arabian Fantasy series here:

Right there with ya! Hope a US publisher buys the rights.

I’d rush out in a book-buying frenzy for this series.

I’m sold on the idea of “Mad Max on magic carpets”.

Thanks for the kind comments! Obviously I would love to have an English language edition of the books – it would also tremendously help to get the movie made. If any publisher is seriously interested in taking a look at the books I can be reached at: info@kaimeyer.com
Best wishes,
Kai

[…] Black Gate speaks with Kai Meyer of the Arabian fantasy The […]