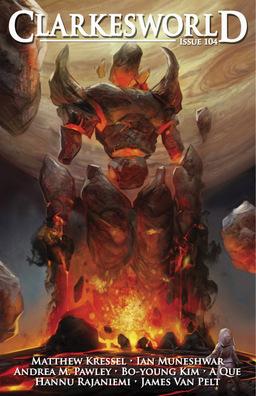 The newest issue of Clarkesworld, one of the best genre mags on the market, is now on sale. Issue 104 contains five new short stories, plus reprints from James Van Pelt and Hannu Rajaniemi.

“The Garden Beyond Her Infinite Skies” by Matthew Kressel
“For the Love of Sylvia City” by Andrea M. Pawley
“Mrs. Griffin Prepares to Commit Suicide Tonight” by A Que, translated by John Chu
“Ossuary” by Ian Muneshwar
“An Evolutionary Myth” by Bo-Young Kim
“Solace” by James Van Pelt (from Analog, June 2009)
“Tyche and the Ants” by Hannu Rajaniemi (from Edge of Infinity, Nov 2012)

Non-fiction includes “Destination: Mars” by Andrew Liptak, who’s also been writing a fine series of pulp and classic SF retrospectives SF at Kirkus Reviews over the last few months (see a partial list here); “Another Word: It’s Good to Be Lazy and Foolish” by SF author Ken Liu; an interview with author and editor Cat Rambo; and an editorial, “Overload!” by Neil Clarke, in which he talks about (among other things) his upcoming Year’s Best Anthology: The Best Science Fiction of the Year, Volume 1, to be published “sometime in 2016” by Night Shade Books. This issue also includes two podcasts.

If it weren’t for the Sad Puppy/Rabid Puppy slate, which pushed aside all other contenders, Clarkesworld would almost certainly have been a heavy contender at this year’s awards as well. However, it was completely locked out of the awards, for the first time in many years.

We last covered Clarkesworld with Issue 103.

Clarkesworld 104 was edited by Neil Clarke and Sean Wallace, and published by Wyrm Publishing. The contents are available for free online; individual issues can be purchased for $3.99, and monthly subscriptions are $2.99/month. A 6-month sub is $17.94, and the annual price is $35.88. Learn more and order individual issues at the magazine’s website.

See our Late April Fantasy Magazine Rack here, and all of our recent Magazine coverage here.

Does anyone know what they pay for their cover art?

Sorry if I sound distracted, but I’m always amazed by the quality…how can they afford it?

I have no idea. And I agree completely that they have some marvelous cover art!

One thing I found when I was buying art for Black Gate was that buying multiple covers was MUCH cheaper than buying just one. In one example, I was offered one cover (which I eventually used) for $500, and two for $600… a big savings on that second cover.

CLARKESWORLD uses a lot of covers by Julie Dillon, and some others. It’s entirely possible that they’ve negotiated well to get multiple covers from single artists.