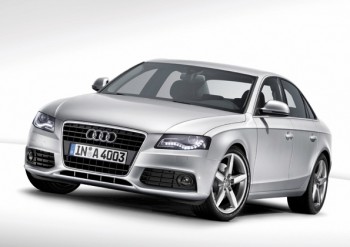 I usually reserve the Black Gate blog strictly for topics related to the genre.  I hope you can forgive a brief trespass on that tradition today, as I celebrate being alive.

This morning I was on IL-47, a single-lane country highway, heading south to Champaign, where I work as a software salesman. At approximately 10:32 a.m. I watched as a fully-loaded 18 wheeler in the northbound lane went into a lock-up to prevent a crash with a stopped car. The truck lost control and twisted across the center meridian until it fully occupied both his lane and mine, still coming very fast and leaving me without a lot of options.

I hit him doing slightly over 60 mph. I’d already gone off-road on the right shoulder, but it wasn’t enough to avoid a collision. The impact triggered four of my Audi’s airbags, including three I didn’t even know I had.  Seriously — there were airbags everywhere.

I took the hit on the driver side. It drove the chassis down into my left rear tire, immobilizing it and sending me into a 60-mph uncontrolled spin — past the truck and back onto the road, then deep into the shoulder on the right. Fortunately the road and the shoulder were both clear. I leveled about 120 feet of grass in a dead line.

I got out of the car without a scratch, for which I thank God, and German engineering.

I can’t say the same about my loyal car, which took a critical hit.  It took ten minutes with a chain and a tow truck just to get it back on the road, and I can’t say for sure if it will ever move under its own power again.

But today, I have absolutely no complaints. I’m just glad to be alive.  Alice and our three kids showed up in her van three hours later, and drove me home to St. Charles, where we went out to dinner and celebrated. I consider myself a very lucky man.

But tomorrow, I will miss my car.

Don’t know what to say. Wow. I am glad to know that you are okay.

As they say in SoCal: “Daaaaaammmmnnnn!”

Frightening. But I’m happy to hear you’re all right!

I’m glad you’re okay. I said “thank God and the engineers” after seeing my unhurt wife’s totaled car, so I know where you’re coming from.

Wow, must be something in the water, my car was hit yesterday as well, although only the back bumper was destroyed. Glad you are ok, John, that one sounds scary!

That’s the thing about luxury cars: the best luxury you buy is survival. I hope you march the insurance check straight down to your Audi dealer.

Will go through the day with slightly sick feeling in stomach. Could be the heat. We’ll call it the heat. Jeez, John. What you gotta be RAMMIN’ into 18-wheelers for? We already KNOW you’re Superman.

Probably we won’t see you tomorrow for the open mic. And you know what? That’s okay! Because at LEAST we won’t think, “Where’s John? I hope he’s not dead!”

“Not dead,” I will tell them, with utmost solemnity. “Only in St. Charles.”

Hope that effin (as Patty would say) truck had insurance.

And thus began the canonization of St. Audi of Chicago.

Why on earth would you think this story doesn’t fit on a blog about Adventures in Fantasy? I’d say it was right in the wheelhouse.

Your car’s earned its place in Valhalla. (But sure glad you didn’t have to go with it!)

At the risk of sounding like I don’t care if you lived or died, I can’t help but wonder what BG would be like without you O’Neill…and the impact that would have on the mini-revival of Sword + Sorcery.

Glad you survived with the ability and willingness to continue BG, I like your sense of direction.

( I hate Vampires more than you ).

The realisation of your mortality ( don’t get that wrong, I just don’t think about you much as a person, not really ‘sorry’, just a cold fact ) makes me want to start writing again ( I did when I was growing up ), and get published in BG, so I can say ‘I’m an O’Neill era alumnus.’

Anyways…I think I’ll have a coffee royale and one more than my usual 3 boxes of black russians to celebrate you and that teamster not getting reaped.

SHEESH!! So glad you’re ok Boss! It would have really sucked for me if dead people suddenly became a politically incorrect topic around here.

Next time, take the Zepplin. I’ll make sure the boys get the beer cans and whip cream cleaned up. And a couple of days with the windows open should take care of that smell no problem.

At least you’ll never find it getting clotheslined by an 18-wheeler.

Glad all is well.

PS: You DID pick up the check at dinner that night didn’t you?

As I’ve been telling people all day, the accident has brought those things that really matter to me into crystal clear focus.

Like my family. And my pulp collection. And my mint condition Bone action figures.

And my loyal car. I still hope it pulls through!

I saw you called… I was at the Doctor’s this morning, and will try and call you later.

Thank You, Mr. Fultz. I’m looking forward to seeing you again at WFC in November. I’ll have much to celebrate. 🙂

>I’ll turn down an empty hub-cap today for your heroic Audi.

LOL! Only James Enge could have written a line like that.

Appreciate your comments, Matthew. You and me both. 🙂

> I said “thank God and the engineers” after seeing my unhurt wife’s totaled car, so I know where you’re coming from.

I know what you mean! And wow – what happened to your poor wife?

Merci, westkeith. I still hope the insurance company won’t total the car. It’s only five years old, and I can’t afford to buy a new one. 🙂

> Wow, must be something in the water, my car was hit yesterday as well, although only the
> back bumper was destroyed.

> I hope you march the insurance check straight down to your Audi dealer.

I’d love to. If that car didn’t save my life, it at least kept me out of a wheelchair. I have no idea what the book value of a 2006 Audi is, and I hope I don’t have to find out.

Sorry I missed your call. You know, I had just finished talking to Howard, and tried to call you yesterday morning from the road at 10:15. The accident was only a few minutes later. I’m glad I wasn’t talking to you when it happened. 🙂

And OF COURSE I’ll be at the Open Mic tomorrow. I have some copies of BG 15 to bring, and a copy of THE YEAR’S BEST SCIENCE FICTION AND FANTASY 2011 I promised to bring you.

Alice is even loaning me her van to make sure I get there. 🙂

> Make your next car a Mad Max special.

Ha! That made me laugh, Bill. That’s the only thing that could really replace my car, I think. 🙂

> Glad to hear you’re all right.

Thank you, Laurie. All I have is a bit of sunburn, from waiting at the side of the road for the tow truck. Yesterday was not a day to complain, that’s for sure.

> Why on earth would you think this story doesn’t fit on a blog about Adventures in
> Fantasy? I’d say it was right in the wheelhouse.

Well said, xdpaul. It even has a hero who died at the end! I hope I can resurrect my car for the sequel.

> Your car’s earned its place in Valhalla.

Thank you, Chris. I like to picture it there, right next to the getaway car in The French Connection.

> makes me want to start writing again ( I did when I was growing up ), and get
> published in BG, so I can say ‘I’m an O’Neill era alumnus.’

It’s touching to hear you say that, Radiant. And I hope you do.

> Next time, take the Zepplin. I’ll make sure the boys get the beer cans and whip cream cleaned up.

Good advice, Sue. But that clumsy thing never did handle anything like my Audi. 🙂

Alfred! You needn’t bring a YEAR’S BEST, because at ReaderCon? This guy at the table where they were selling it? GAVE ME MY TWO CONTRIBUTOR COPIES!!! WHUHOOO!!!

Not a scratch?! Remarkable. Glad you are ok.

Seriously, John, VERY glad you’re okay. But no acting out any more Spielberg movies, okay? (At least not in a frickin’ Audi for chrissakes!)

John, happy to hear you’re ok and glad your Audi had all those airbags you didn’t know about!

Thanks Tyr! Yeah, remarkable. The kind of thing I’ll be reliving in my mind for a long time (if the last 24 hours have been any indication).

I may never be able to watch that movie again. 🙂

And thanks for the warm wishes, my friend.

Thanks, Kerstan! Yeah, it was like Christmas in my dashboard.

> I know what you mean! And wow – what happened to your poor wife?

Rear-ended in a hit-n-run. She saw him coming just before he hit and started evasive maneuvers. When the tow-truck driver showed up he said, “Cool! How’d you get it there?”

Do you remember that Amazing Stories mini-movie about the B-17 bomber crew during WWII who couldn’t get the landing gear down or the ball turret gunner out and how were going to have to crush him just to crash land, but fortunately he was a cartoonist?

I picture the Audi performing such a Spielbergian miracle with the airbags and such.

Obviously, I’ve been thinking about you since yesterday. Good news is worth revisiting.

Glad you came through that unscathed, John.

I thought my SO had a close shave when a semi cab flew through the air and landed right in front of his pickup. But he wasn’t actually hit (or vice-versa).

Ah, good to see you saw my calls John. I’d hate to think of your poor phone totaled by the insurance company. That’s nigh irreplaceable. 😉 Well wishes my friend!

Great to hear you’re all right. The Germans sure know how to design safety features.