[Click on any of the images above for bigger versions.]

Murray Leinster is one of my favorite pulp writers. I reprinted one of his earliest tales, “The Fifth-Dimension Catapult,” which first appeared in the January 1931 Astounding Stories of Super-Science, way back in Black Gate 9. Fittingly enough, when I kicked off my investigation of the Classics of Science Fiction line, I started with one of the finest volumes, The Best of Murray Leinster. More recently, I looked at his creepy pulp SF tale “Proxima Centauri” on August 15th.

But none of those is nearly as well known as his classic space fantasy The Pirates of Zan. Because, hello, space pirates. Also, it was blessed with a terrific series of covers over the three decades it was in print. So here we are with another fond look at the work of Murray Leinster.

(While we’re on the topic, why aren’t there more novels of space pirates? The only other ones I can think of are H. Beam Piper’s Space Viking, CJ Cherryh’s Merchanter’s Luck, Piers Anthony’s Bio of a Space Tyrant, and maybe A. Bertram Chandler’s John Grimes novels, at least the ones featuring his recurring adversary Drongo Kane. That’s pretty sad. Seriously, if there are two things that go great together, it’s unexplored space and pirates. Get with it, science fiction.)

The Pirates of Zan was originally serialized (as “The Pirates of Ersatz”) in three parts in Astounding Science Fiction, starting with the February 1959 issue. The famous Kelly Freas cover, featuring a pirate with a slide rule between his teeth, is one of the most beloved Astounding covers of the era. It’s shown at left above.

Don’t ask what a slide rule is, you damn punk kids.

Leinster’s book  was nominated for a Hugo Award for best novel that year — along with Kurt Vonnegut’s The Sirens of Titan and Brain Twister by Mark Phillips — but lost out to Heinlein’s Starship Troopers.

The first paperback edition arrived in 1959 as one half of an Ace Double, with a splendid Emsh cover (second from left, above), backed with Leinster’s short novel The Mutant Weapon. Here’s the inside text:

Because Bron Hoddan was a serious electronics engineer, he didn’t want any part of his particular planetary heritage. For he was from Zan — and Zan’s only occupation was spaceship piracy!

So Bron went to Walden, the most civilized planet of them all. His first step to making himself a good reputation was to invent a machine that would save the government millions.

But when instead he was seized and jailed as the most unspeakable criminal in Walden’s history, he realized that there was only one way open to remedy this “civilized” disaster. And that was by putting into use some of Zan’s old-fashioned buccaneering techniques!

Bron Hoddan
He knew what was good for him, but not what was bad.

Nedda
She may have been sweet, but she wasn’t nice.

Thal
His stupidity had a purpose — self-interest.

Don Loris
This sneaky character stopped creeping when he met a bigger sneak.

Lady Fani
No one could afford to ignore her, except the man she loved.

Derec
Because he was Bron’s best friend, he had to betray him. 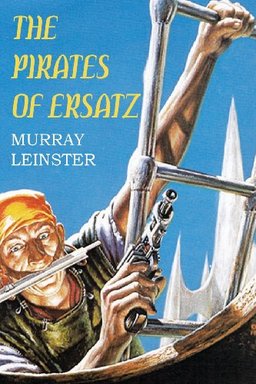 The novel returned to print in 1971, again as an Ace Double. The new cover — with what looks suspiciously like the lunar lander from 2001: A Space Odyssey in the background — stays with the space pirate theme; the artist for this one was uncredited (second from right, above).

The final paperback printing (far right) was from Bart Books in March 1989, once again the artist in uncredited. Interestingly, they recycled the inside text (minus the Cast of Characters) as the back cover text for this edition.

I admit I’m rather fond of each of the different editions and I’ve collected them all. The hardest one to come across was, curiously enough, the 1989 Bart edition, but I finally tracked down a copy last month.

After 1989, The Pirates of Zan  — and space pirates novels in general — seemed to fall out of favor with readers. It never had another mass market edition.

However, that’s not to say it’s totally unavailable.

The complete novel was included in the excellent Baen paperback compilation, A Logic Named Joe (June 2005), along with two other novels — Gateway to Elsewhere (1954) and The Duplicators (1964) — and three short stories. Sadly, A Logic Named Joe is out of print (though still available in digital format)

If you’re interested in tracking down a copy, you certainly have options. More recently, Wildside Press published a hardcover edition in 2007 and both Resurrected Press and Spastic Cat Press have released trade paperback editions (both under the original title The Pirates of Ersatz).

That’s the Spastic Cat edition at right, with a fine reproduction of the original Freas art.

Alright I give, what’s a slide rule?.

I wrote a Space Orc Pirates story, inspired by Treasure Island/treasure Planet. It’s available as a Kindle. Does that count? 🙂

> I wrote a Space Orc Pirates story, inspired by Treasure Island/treasure Planet. It’s available as a Kindle. Does that count? 🙂

It does! We cherish all pirate space fantasy here at Black Gate. What’s it called?

[…] by Andre Norton Tales of Outer Space/Adventures in the Far Future, edited by Donald A. Wollheim The Pirates of Zan by Murray […]

[…] last time we surveyed the covers of a single novel was Murray Leinster’s The Pirates of Zan. Read all of our recent Vintage Treasures […]

[…] attention we’ve been giving to the classic Ace Doubles by Andre Norton, Harlan Ellison, Murray Leinster, and others, I would be remiss to not point out that Wildside Press has recently revived the […]

[…] and the Ace Double Tales of Outer Space/Adventures in the Far Future edited by Donald A. Wollheim The Pirates of Zan by Murray […]

[…] and the Ace Double Tales of Outer Space/ Adventures in the Far Future edited by Donald A. Wollheim The Pirates of Zan by Murray […]

Came across this trolling the archives. Have you looked at Alistair Reynolds Revenger Trilogy?

And in the Traveller RPG you should review the Pirates of Drinax by Mongoose.

> Have you looked at Alistair Reynolds Revenger Trilogy?

Yes! In fact, we covered the whole series, even the new book released this month:

> And in the Traveller RPG you should review the Pirates of Drinax by Mongoose.

An excellent suggestion! Patrick Kanouse mentioned it in his review of BEHIND THE CLAW, and I tracked down a copy immediately. That boxed set is HUGE, and I’d love to find someone to review it for us.

You’re well ahead of me. My father studied electrical engineering in the 70s, and he had both a slide rule and (eventually) a calculator. But I never learned how to use the former.

My dad’s slide rule was probably different from your dad’s engineering slide rule since it was used for dead reckoning and was circular but the principles were the same.

Oh and his slide rule was charitably called a “Navigation Computer”