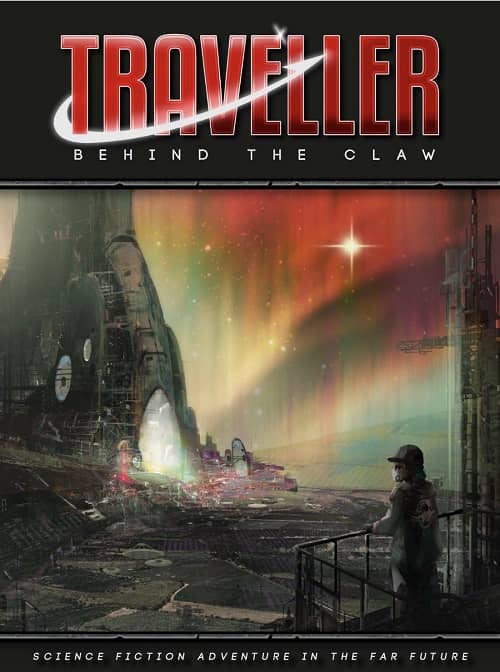 Traveller is a popular science fiction role playing game originally released in 1977. Over the decades several editions have been released, along with a substantial volume of player created resources and supplements.

Since the 1980s the earliest supplements have been fleshing out the Spinward Marches and Deneb sectors of Charted Space (the Traveller term for the area of the galaxy that has been widely explored), where the Zhodani Consulate and the Imperium have fought four wars with a fifth looming. Meanwhile, the Vargr Extents provide numerous corsairs that raid shipping and planets. Rich with conflict and tension, referees have and continue to find many adventures to send their players on in this locale.

This latest foray into this classic setting comes from Mongoose Publishing in Behind the Claw, a full-color 288-page sourcebook in the style Mongoose has adopted for the latest edition of their Traveller line. The book looks excellent as a result. Crammed with content, buyers will also get two 28×40-inch poster maps of the Spinward Marches and Deneb sectors. 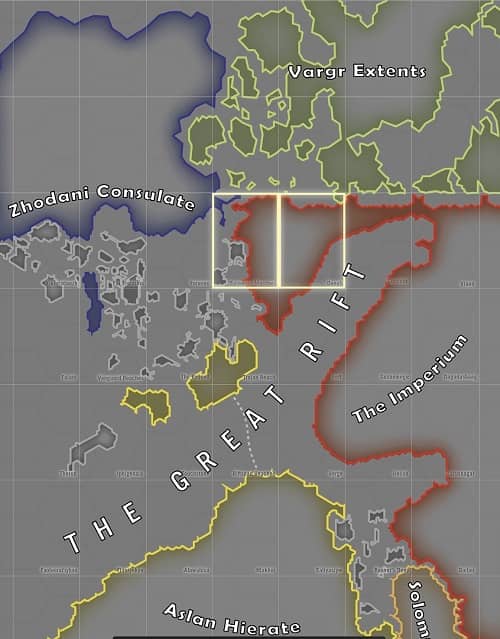 Following an overall introduction that covers basic concepts associated with Traveller — things like galactic directions, the jump drive, and so on — the book is divided into two major sections covering the Spinward Marches and Deneb, each with a significant introduction in their own right. The sector introductions provide a high-level history and status of the major actors in that sector. Of note is the Deneb sector introduction with its descriptions of the seven duchies that wrestle for dominance and power.

After each sector’s introduction, players will encounter the common format used by Traveller and Mongoose. Each chapter starts with a brief description of the subsector (usually covering notable history, jump paths through the subsector, and so on). A table of the planetary systems in the subsector is included with location, types of bases, trade codes, allegiances, travel codes, presence of a gas giant, and the standard universal world profile (UWP) format for the main planet’s statistics: starport level, size, atmosphere, percentage of water, population, government level, law level, and tech level (the Traveller classification for what level of technology that particular planet or system is capable of producing). This is followed by a map of that subsector with much of that information in iconographic format. Next up, a few of the systems get a brief write up. These take a couple forms, the most common being a narrative fleshing out the statistics in a few paragraphs. Gram, a system in the Sword Worlds with a UWP of A895957-C, receives nearly a page of coverage, including this typical snippet:

It is a heavily populated and industrialised world whose aristocracy are the owners of major industrial and commercial companies. Some are businessmen or captains of industry, others simply the heads of families that own businesses and pay staff to run them, then able to pursue other interests or a career in the military.

This hangs a bit of meat onto the UWP’s numbers for population and law level — 9 (billions) and 5 (feudal technocracy), respectively. Other interesting details about atmospheric composition and whatnot vary from system to system. However, the goal is to give referees and players a bit of the details they can carry forth into their game. The descriptions are well-written, concise, and useful. 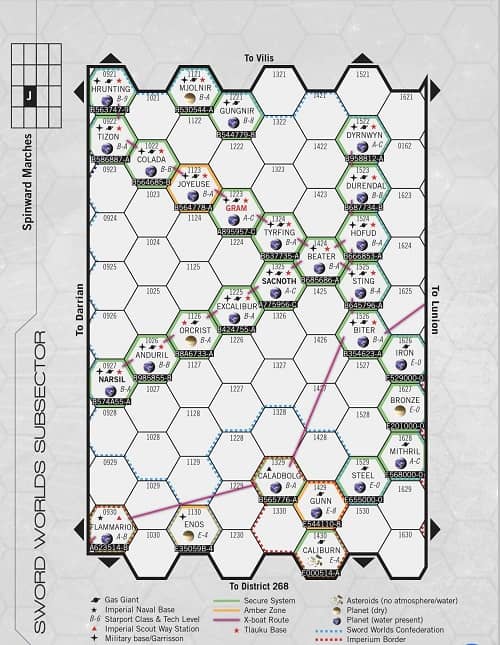 For Red Zone systems (that is, Travellers are not supposed to be going there), the write up is shorter, claiming that the Imperium — and specifically the Imperial Navy — does not give specific reasons why that system is Red Zoned. Rumors for the classification provide adventure seeds. For example:

The reasons for the Red Zones at Algine and Pscias are not commonly disclosed but Pscias is known to have a very low-tech culture and is thought to be interdicted by the Scout Service to protect natives from outside interference. Algine may be interdicted for the same or other reasons; those interested enough to speculate rarely have concrete information.

Behind the Claw does not contain specific adventure seeds, an adventure, or recommendations for the types of campaigns and adventures — trader, mercenary, political, and the like campaigns — but it does contain plenty of hooks like the following that give the referee potential ideas to explore:

As a result of this economic and physical isolation, Keng receives almost no notice from the Imperium and simply goes its own way. There are areas of the planet that have hardly been explored or even surveyed from orbit since the days of the first landings centuries ago.

While readers of Mongoose’s two books covering these sectors (The Spinward Marches and Deneb Sector) may notice the lack of fuller coverage of things like the Imperial Ministry of Justice or Imperial High Law, Behind the Claw covers a lot of new ground with the addition of numerous aliens for potential PCs, vehicles, ships, equipment, and creatures — all aligned with their appropriate sector in space. The addition of the aliens is likely of particular interest to players, and this book includes 17 of them. Notable ones are: Zhodani, Darrian, Dolphin, Ebokin, and Lurent. While the Zhodani and Darrian details in Behind the Claw make no effort to be as full as prior publications, they do provide some guidance for those who do not possess those books and want to incorporate such PCs into their game.

Each alien is given a short physical description (and the non-human ones include artwork), adjustments to characteristics when rolling them up, specific traits — which have in-game consequences usually in the form of dice modifiers — and suitable careers from the Traveller Core Rulebook. For Zhodani or Darrian characters, Behind the Claw notes that additional careers for them will be in forthcoming publications — presumably the Aliens of Charted Space book. 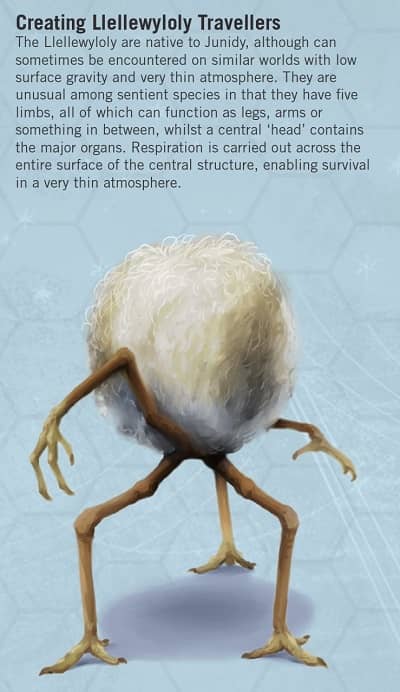 Beyond the aliens, Behind the Claw includes seven creatures, nine gear entries (three of which are limited to Dolphins), five vehicles, and 18 starships ranging from the TL15, 100-ton Ilauus-Class Fast Shuttle to the TL16, 300,000-ton Kehmed-Class Dreadnought — and much in between. Each ship includes the standard Mongoose details and isometric deck plans.

Equipment ranges from the low tech level Keng Long-Gun to the high technology High-Performance Grav Harness. The long-gun is the only explicit weapon added to Behind the Claw. The rest are more standard equipment — though if you do not have Dolphin characters or NPCs in your game, the Dolphin equipment items will be of little use.

The vehicles are pretty standard fare and usually variations on existing ones in other Traveller books — except, perhaps, for the Hand-Crank Dirigible of Victoria at TL2 – and are suited for adding local color. 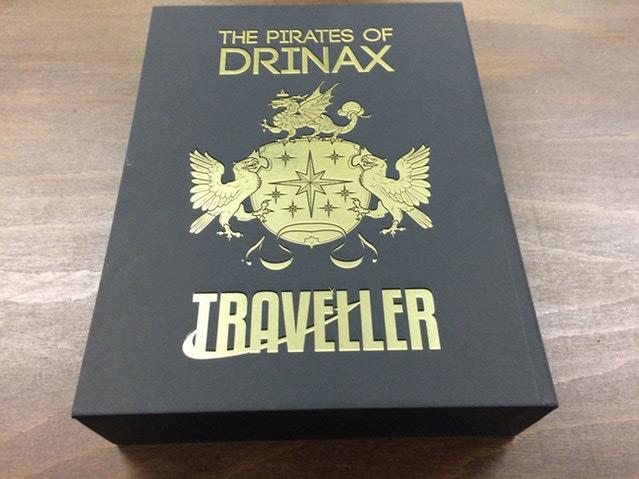 The creatures add a bit of extra fluff and build upon the overall catalogue that Mongoose is building, though alone are not enough to warrant purchase of Behind the Claw (and the Chirpers have been covered before in previous editions). The most interesting is the gas-shark (a name one cannot but chuckle at) — gaseous, omnivorous grazers that captures the spirit of exploration in Traveller and the mundane threats therein.

Within this sourcebook’s 288 pages are other nuggets of information. The Rachele Society (a violent Vilani supremacist organization) and the Church of Stellar Divinity (a sizable following lives on Deneb, a planet with a religious dictatorship) are a couple of referee gems. Several corporations receive brief treatment and can add flavor or serve as protagonists. Perhaps more of interest is the introduction of Jump Bridges. These are starship refueling depots that allow ships to traverse large gaps between systems that they would normally not be able to cross. The key is that astrogators and pilots must know the exact location. This can be a useful tool for referees to provide an option for a group of PCs — increasing the risk for a speedier jump path (or deep space rendezvous).

The book ends with a subject index that makes finding equipment, ships, creatures, and aliens easy.

An earlier (and much shorter) version of Behind the Claw, written by Martin Dougherty and Neil Frier, was published for GURPS Traveller in 1998.

This kind of book appeals to those who want to have a backdrop of canon for their campaigns and have them take place in a particular place in the Traveller’s Charted Space. However, for those looking to break from canon — whether small or big — Behind the Claw offers players a bounty of information that can be adapted for their own canon along with a range of new species, creatures, ships, and vehicles.

For those who have Mongoose’s earlier The Spinward Marches or Deneb Sector, they will find much here that they knew already but a substantial body of new material, particularly for those interested in bringing in non-human PCs. The quality of the design and full-color treatment may prove to be enough to warrant the purchase for many.

Patrick Kanouse encountered Traveller and Star Frontiers in the early 1980s, which he then subjected his brother to many games of. Outside of RPGs, he is a fiction writer and new convert to war gaming. You can check out his ongoing, play-by-post, referee-less Traveller game at basiliskstation.blogspot.com. Twitter: @patrickkanouse. Facebook: www.facebook.com/patrickkanouse

One thing that “black box” Traveller really lacked were aliens (or even human “sports” like Zhodani), which makes me very envious of the happy folks who play Traveller with such amazing looking sourcebooks like this one. How bad is it that I can still (almost!) read the universal world profile (UWP) codes??

I will say that Mongoose has been producing fantastic books. I started with the Traveller boxed set in the early 80s, so I know of what you speak. And you are not alone at looking at the UWP and seeing the code come to life.

I really enjoyed this review, Patrick. it’s been a few years since I was been interested enough to Traveller to pick up the supplements again, but you’ve convinced me.

I’m thinking of starting with The Pirates of Drinax, which looks like a great sandbox setting for something interested in getting back into the game.

Piraates of Drinax is really quite awesome. Big, gigantic. Tons of detail. It also includes a full write up on the Aslan and playing characters from the Aslan Hierate.

I finally ordered a copy of The Pirates of Drinax, and it arrived this weekend.

You weren’t kidding about it being gigantic… it’s huge! I think I hurt myself just picking it up.

It fits in nicely on the shelf with all the boxed sets I bought back in April:

That’s fantastic! I hope you enjoy it as much as I do.

The Drinax companion is available for pre-order.

I love this line from the Sindal Sub Sector chapter in the Core rule book:

“The Sindalian Empire haunts this sector like a ghost.”

What a hook for an adventure.

I have my Drinax Companion pre-ordered! 🙂 That is a fantastic hook!