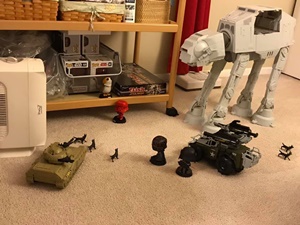 My son’s birthday is December 22nd. We’ve made sure that Sean, who just turned twelve, gets two events, and two sets of presents: we don’t combine it with Christmas. So, he’s pretty much buried in new ‘stuff’ for a week. This year, the day before his birthday, I took him and a friend to see The Rise of Skywalker. And that set him off on a Star Wars Pops buying-binge. He had a half dozen within a week. It quickly went up to eight, where it’s in a holding pattern.

Sean decided he wanted to be a Dungeon Master, and he created a new game to pay with me: Pop Dungeon. He pulled an oversized red die we had from some toy bin somewhere (it’s not from any game), and as a backup, he set aside two regular six-sided dice, though we rarely use those.

Grabbing a mish-mash of items from around his room, including a rope, a big AT-AT, some plastic apples, a Transformer, a tank, a baseball cap, and more and he placed them all around his room. Then he put six of the Pops  on his school desk, and proceeded to Dungeon Master me through a Pop Dungeon adventure!

I roll the ridiculously bouncy, giant red die. A 1 is catastrophic. 2 is pretty bad. 3 is not too bad. 4 means I accomplished what I picked to do. 5 or 6 means I succeeded with some type of bonus effect. It is RIDICULOUS how many times I roll a 1. I’m going to record it for one session some time, because it is waaaaaaaaay beyond statistically improbable!

There are a lot of Turns. And he gets to roll the die for his guys after two of my Turns. Even if I string together a couple successes in a row, a 1 or 2 (or a couple of them) knocks the party for a loop. The first couple sessions went an hour-plus, so I had to shorten them up.

Sometimes, the party members are killed and some aspect of the force reanimates them and they are on his team. I think in one adventure, Captain Phasma was killed from my party, then I had to kill her twice more when she was brought back on the other team. Though, Sean’s been thrashing me so soundly, he hasn’t had to do that lately. 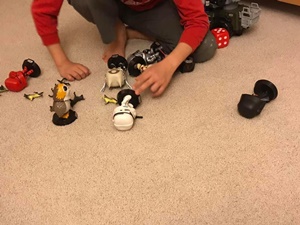 And he does funny stuff when the roll is a 1. Like, when he rolled it, he had Kylo Ren accidentally force push his ally, the Second Sister Inquisitor, and she beat him to a pulp and he was wounded.

But it’s mostly been me. I did get to the end of a couple sessions and discovered the villain we’re after is Darth Sean. But it went downhill the next few sessions, and he has nicknamed the game, Destroy Dad Dungeon. I’m not going with that, myself.

The Pops that he owns, and which we are using, are: Kylo Ren, Captain Phasma, Porg, Clone Trooper, Second Sister Inquisitor, Sith Jet Trooper, Enfys Nest, and Scarif Trooper.

At the end of a session, he takes a couple of pics on his iPhone, of the layout, so he can set things up properly when we resume play.

He’s showing some storytelling and dungeon mastering skills, and it’s been a lot of fun. He looks forward to playing it when I get home from work. The last session finished with a total party kill (due to my bad rolling), and we’ll be starting a new adventure next time. The game can go on pretty much as long as he imagines things to happen.

That sounds like a blast. Something to (hopefully) look forward to when my daughter gets a little older.

Pop Dungeon sounds like the rules-lite, free-form game everyone should be playing! And “cursed” dice exist in all RPG systems, at all times. Have much fun, Mr. Byrne, as you give new meaning to “All for 1, and 1 for all!”

Everyday… – We were standing the Pops around the board for Star Wars Monopoly, and he decided he wanted to do this instead one day. He knows about RPGing from me, but has never played anything but on a PC.

He decided he wanted to be a DM, and he did a great job. We played last night – total party kill. Again..