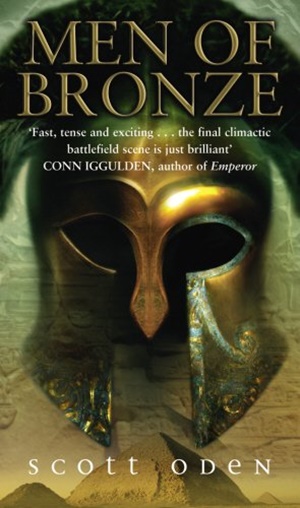 “What have I been reading lately, you ask?” Oh. You didn’t say that. Well, I’m going to tell you anyways.  When I ‘get into’ something, I jump in full-bore for a short time: up way past my elbows. That’s how most of my series’ here at Black Gate start. Fortunately, I can be reading a couple different books simultaneously, and I also listen to audiobooks to help cover more ground (though I ALWAYS prefer reading to listening).

And I recently went on a short Sword and Sandals kick. Scott Oden and I have become friends through our mutual love of Robert E. Howard: he did the “Devil in Iron” entry for Hither Came Conan. I grabbed the digital version of Men of Bronze (a STEAL at $3.99!). It’s historical fiction (non-fantasy) set in 529 BC in ancient Egypt. It’s near the end of the time of the Pharaohs and Egypt is trying to hold off the encroaching Persian Empire. As is often the case with faltering empires, it is relying heavily on mercenaries to keep order.

Hasdrabal Barca is the protagonist; the deadliest mercenary of them all, leading the fight to stop the betrayal of Greek mercenaries, and the ambitious Persians. I had trouble keeping the various names straight, but I very much liked this book. It’s got a grand sweep, and I love Scott’s depiction of Egypt. There’s a rough scene early on, but fortunately, that not the norm for the rest of the book. Much recommended. I also bought his Greek historical novel, Memnon, at the same time (same price). It’s on my massive To Read list.

Of course, I couldn’t just read one book of a type, and move on. That’s not me! Howard Andrew Jones was Black Gate’s first Managing Editor (a post recently assumed by Seth Lindberg) and is currently receiving rave reviews for his epic fantasy, The Ring-Sworn Trilogy. I had not yet read his two fantasy Sword and Sorcery novels, featuring the wise and learned scholar Dabir and the brave man of action, Asim (I was not totally unfamiliar with them – more on that below).

So, I got the audiobook for Desert of Souls, the first novel. The adventures take place in a fantasy-real version of Arabia, with sorcery and monsters. And there’s a Robert E. Howard Easter Egg near the end. I like the main characters, and their world, so I have started on the audio book of Bones of the Old Ones.

I had already read The Waters of Eternity; a collection of six short stories featuring the two men. I re-read it, and I actually prefer it to the novels. They are really mysteries, set in that fantasy Arabia. I like the mix of fantasy and detective work, and also the shorter length. You should check them out.

For months, I have been listening repeatedly, to an audiobook of the five Max Latin short stories. I simply never get tired of them. The woefully under-appreciated Davis, who I wrote about last week, as well as last year, is on my Harboiled Mt. Rushmore. And the stories about the not-as-crooked-as-he-pretends Latin are the best of the bunch. I listen and read them throughout the year.

I also picked up volumes one and two of The Complete Cases of Bail Bond Dodd, the first series character that Davis created for Dime Detective Magazine. The Dodd and Latin collections are from Steeger Books. You should be reading some Davis. 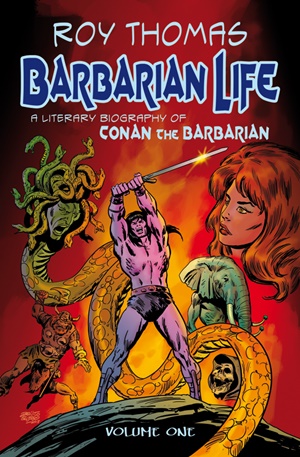 When the mood has struck me over the course of the year, I’ve been reading an issue or two of Marvel’s old Conan the Barbarian comic, from the two Omnibus issues they put out. And I’ve been coupling it with Roy Thomas’ SUPERB behind-the-scenes recollection of his work on the first hundred issues, Barbarian Life. I never read the comics, and I’m quite enjoying them. And I absolutely love Thomas’ book. I just got the second volume yesterday.

I plan on doing a Black Gate series on the first dozen or so issues, in 2020.

I read the six books that David Dickinson wrote about Mycroft Holmes, who was Auditor of all the Government’s books. Brother Sherlock is retired, and Mrs. Hudson now keeps house in Mycroft’s Pall Mall apartment. Inspector Lestrade works with Mycroft throughout the series. It didn’t bowl me over, but I enjoyed the books enough to read them all. I think Holmes fans would do well to check them out.

During the Fall, I read quite a few stories from David Marcum’s MX Book of New Sherlock Holmes anthologies. Some of the authors whose stories I quite enjoyed include Mike Hogan, William Patrick Murray, Roger Riccard, Mark Mower, and Tim Symonds, to name just a few.

I also read some Titan Books titles, including David Stuart Davis The Devil’s Promise and James Lovegrove’s The Devil’s Dust. Apparently, I had a theme going there…

I dug into a Victorian-Era murder that Arthur Conan Doyle had some thoughts on. Hopefully it will be the basis of a new story next year.

I don’t know that i liked them more. But Wells of Eternity is just as good as the novels. Its hard to get the word out about short stories.

I tried a few issues of Marvel Conan (i think i prefer savage sword) and they didn’t really grip me. Maybe reading them in order helps.

When I read the Tower of the Elephant adaptation all i wanted to do was go back to the original.

I love the MX book of new Sherlock Holmes adventures, I have the first 15 volumes, which is where I decided to stop, not because they weren’t still very good, but because of space. Shelf space. I’m also enjoying the MX volumes of Dr. Thorndyke novels and stories, two of which are out, volumes 3-5 on the way.

Glenn – I think the Marvel comics are fun. And Thomas is a genuine Conan fan, so I don’t think they’re too far ‘off the rails.’

Savage Sword is too wordy for me.

R.K. – I’ve got all the MX books. I haven’t liked every story, and every author, but the percentage is pretty good over 20 volumes!

David is a HUGE Thorndyke fan. I never really took to him, so I haven’t gotten them. I’m much more a Martin Hewitt and Flaxman Low guy.

Something else with the Conan comics. It looks like whatever deal Marvel has for the liscense doesn’t include adding anything to Marvel Unlimited.

Glad you enjoyed Men of Bronze, Bob! You know, it was meant to be a pastiche Conan novel, but the line went belly-up before I finished it. At a friend’s insistence, I rewrote it, decided it didn’t work as fantasy, and rewrote it again as historical fiction. Before I settled on Late Period Egypt, earlier incarnations were set in pre-Islamic South Arabia and in Mesopotamia during the reign of Nabonidus. The only constant between the versions was the Phoenician mercenary, Barca 😉

Scott – I was up against my deadline (like I am EVERY week..).

If I’d had more time, I was going to tell some of your Full Circle Conan’ reminiscence from that awesome blog/FB post you put up about it, say, four months ago-ish?

In fact, if you leave the link here as a comment, I’ll add it to the post.

I think this is the one: https://scottoden.wordpress.com/2019/02/14/there-and-back-again-a-writers-journey/