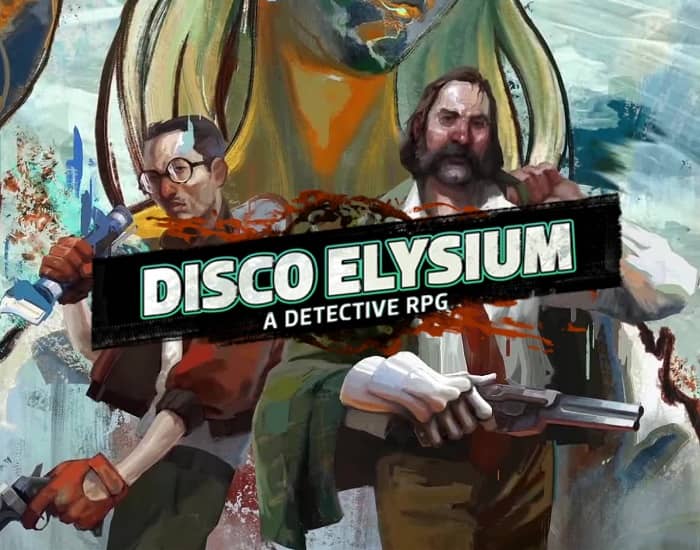 I don’t play video games quite as much as I once did, but I can still get hooked from time to time.

For anyone who still spends time on PC gaming and is curious what makes a great modern RPG, I just want to say that Disco Elysium by ZA/UM is it. Really it. Like, sublime levels of it. It’s not only my personal Game of the Year, but quite possibly my Game of the Decade. It’s quirky and diabolically weird, so I’m not making any sort of blanket recommendation as it likely won’t float everyone’s boat.

But the writing is incredible. Beyond incredible, actually. The character development and creativity and artistry. The prose, the plotting, the pathos, the world-building. I haven’t seen writing of this caliber in a video game since I first played Planescape:Torment 20 years ago. I’m not certain this eclipses it. Not quite, I don’t think. But it’s up there. DE is shorter and somewhat less epic in scope or it’d likely have passed my old favorite by. 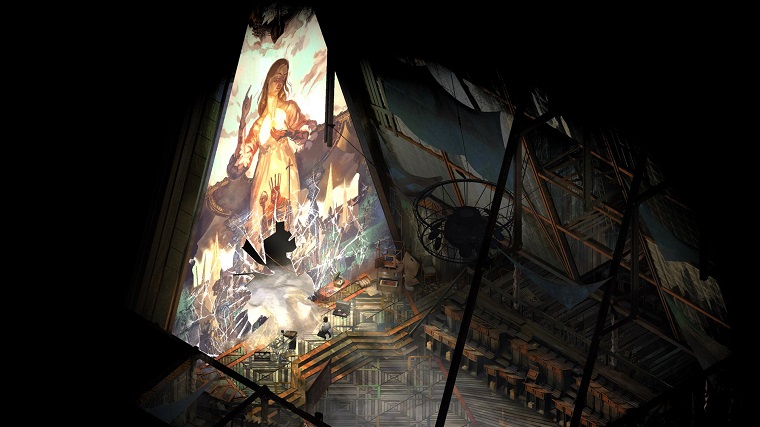 Anyway, if you’re one of the people who remembers PS:Torment back at the turn of the century, then you’ll understand what high praise this is. And this game is probably right up your street.

For the rest of you, I’ll try to shed a bit more light. Disco Elysium is ostensibly a police procedural investigative roleplaying game, wherein you play a detective seeking to solve a murder. The opening conversation, an in-depth argument with your own Ancient Reptilian Brain about whether you should bother to seek out consciousness or simply surrender and die in your wine-induced sleep, will very quickly disabuse you of any notions of gaming conventionality here. Things spiral rapidly and dangerously out of control from there. 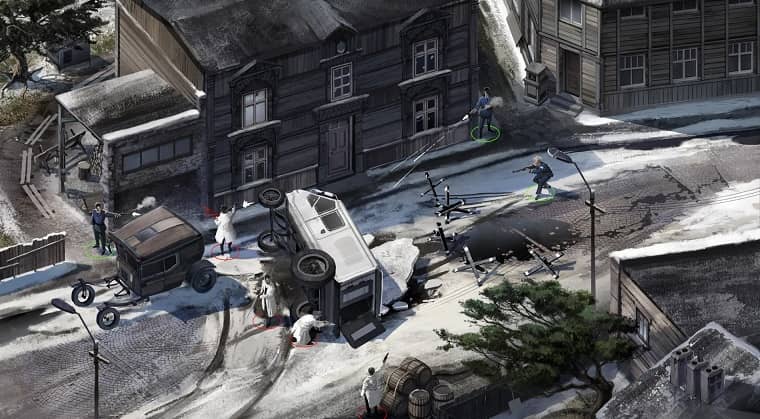 Playing upon a treasured trope of hardboiled noir, you awaken with no memory of what has come before. No name, no agenda, no clothes, no history. Just your fractured psyche, a forest of empty wine bottles, and a crippling hangover. The actual progress of the game is handled through a satisfyingly in-depth skill system that runs partially under the hood, driving all voluntary interactions as well as cueing the player in to passive applications, like noticing a change in birdsong or realizing that your own necktie is independently trying to strangle you to death. 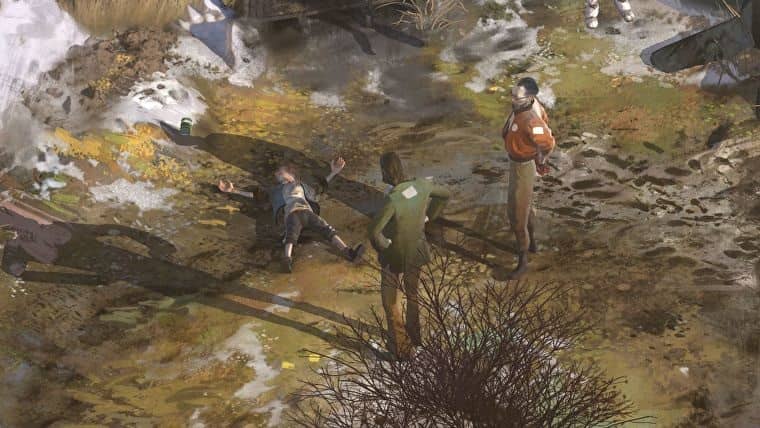 The nihilistic world is remarkably well fleshed out, the non-player characters earnestly realized, and the myriad plot threads extremely engaging. You may have no idea what to do fifty percent of the time, but will still find yourself spending every available minute of the day carrying out nebulous tasks and exploring your fascinating surroundings. Surroundings which, I will add, are all gorgeously represented in the style of expressionist watercolors. 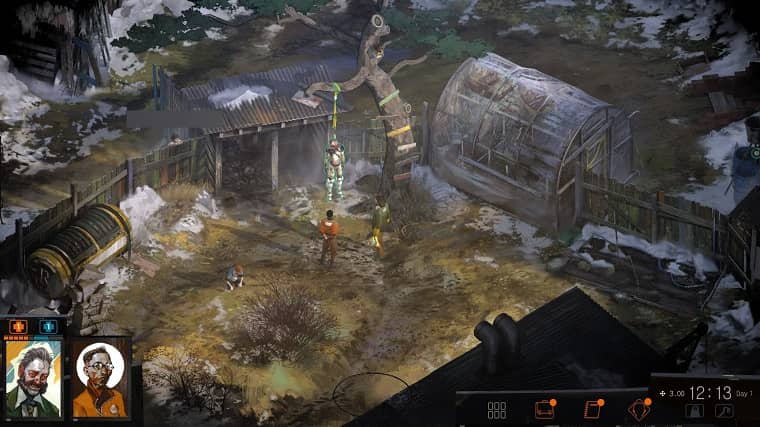 It has all but consumed my life for the past several days now. I suspect it will do so again on multiple re-plays. But I’ll need a break first, just to digest the writing and everything that’s going on. What I expected to be an interesting whodunnit turned out to be an emotional and disorienting journey of self-exploration and repeated attempts to repair a damaged persona in a world that seems actively hostile towards the human race. At one point I opined to my wife that the game felt like Michael Cisco wrote an episode of The Sweeney and Terry Gilliam stepped in to direct it. 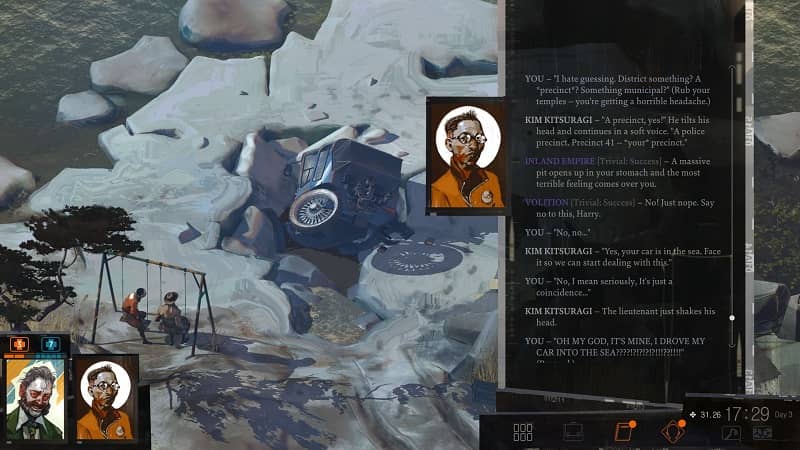 The screen shot above isn’t necessarily a good example of the exemplary writing, but it’s one I happened to take because I loved this scene so much in context. My drunken, meth-addicted, glue-sniffing detective and his stodgy partner Kim are sitting on a derelict swing set in a shelled-out playground in a dystopian city, killing time by discussing philosophy and racial tension while waiting for low tide to reveal the call sign on a half-submerged vehicle they spent days tracking to the edge of the semi-frozen ocean.

The punchline was picture perfect. Forgive the possible spoiler. Trust me… getting a spot of insight into one of the thousand mysteries in this game won’t hurt yer fun any.

the game is supposed to be based on a book one of the writers had, set in the same place. i dont think it has been translated into english but i tried looking for it anyway. the game is amazing. the title is Sacred and Terrible Air. well, if the wiki is to be believed anyway. hopefully with their relocation to london we might see a translation yet.

but i looked up some info on it: the book is set 21 years in the future and should see release in english in the second half of 2020.

Man – they’ll let anybody write a post at this place…

You and I are going to write THE essay on Total War: Warhammer II – eventually…