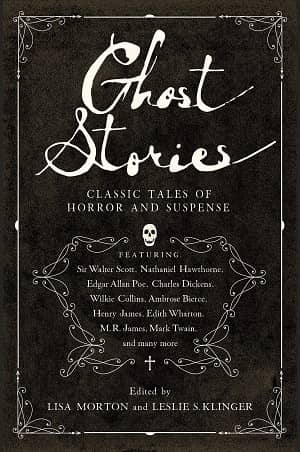 I know it’s nowhere near Halloween — what Goth Chick joyously calls “The Season” — but that doesn’t mean I don’t delight in a brand new ghost story anthology.

A masterful collection of ghost stories that have been overlooked by contemporary readers ― including tales by celebrated authors such as Charles Dickens, Sir Walter Scott, Mark Twain, and Edith Wharton ― presented with insightful annotations by acclaimed horror anthologists Leslie S. Klinger and Lisa Morton.

The ghost story has long been a staple of world literature, but many of the genre’s greatest tales have been forgotten, overshadowed in many cases by their authors’ bestselling work in other genres. In this spine-tingling anthology, little known stories from literary titans like Charles Dickens and Edith Wharton are collected alongside overlooked works from masters of horror fiction like Edgar Allan Poe and M. R. James.

Acclaimed anthologists Leslie S. Klinger (The New Annotated Sherlock Holmes) and Lisa Morton (Ghosts: A Haunted History) set these stories in historical context and trace the literary significance of ghosts in fiction over almost two hundred years ― from a traditional English ballad first printed in 1724 through the Christmas-themed ghost stories of the Victorian era and up to the science fiction–tinged tales of the early twentieth century.

In bringing these masterful tales back from the dead, Ghost Stories will enlighten and frighten both longtime fans and new readers of the genre.

Ghost Stories has an impressive list of contents. I tried to find a copy of the Table of Contents, but all I found was this weird Google widget that allows you to browse the first 40 pages of the book (including the TOC). Here it is.

If you’re in the market for classic spooky tales, you’re in luck. We’ve covered a few similar anthologies and collections over the years, spanning the last hundred years.

Ghost Stories will be published by Pegasus Books on April 2. It is 257 pages, priced at $25.95 in hardcover and $22.73 in digital formats. The cover was designed by Faceout Studio and Charles Brock.

See all our coverage of the best new upcoming fantasy here.

Looks very interesting! When I went to do a search on Amazon for this book I see that a new Klinger annotated edition of more Lovecraft stories is coming out later this year. Excellent!

Well, I wouldn’t say those ghost stories are neglected or overlooked. As a matter of fact the large majority of them has been regularly anthologized. Good stories, yes, but not a rare treat for confirmed ghost story fans

I know what you mean. What casual ghost story reader doesn’t have multiple copies of Charles Dickens’ “The Signalman” or ‘Oh, Whistle, and I’ll Come to You, My Lad’ by M.R. James?

But there were still a few items on the TOC brand new to me, and I appreciated that.