Peter Haining was a prolific editor, producing over 100 anthologies between 1965 and his death in 2007. Black Gate readers are probably most familiar with his Sherlock Holmes books (which Bob Byrne has mentioned more than once), his 1976 Weird Tales facsimile anthology, and his various volumes on the pulps, including The Fantastic Pulps (1976), Terror!: A History of Horror Illustrations from the Pulp Magazines (1977), Supernatural Sleuths (1986), and The Classic Era of American Pulp Magazines (2001).

I stumbled across a very rewarding anthology of horror stories in a $1 bin at Windy City Pulp and paper earlier this year. Beyond the Curtain of Dark was originally published in October 1966 in the UK by Four Square Books, with a delightful cover by Josh Kirby (above left). It was reissued in November 1972 by New English Library in the UK with a cover by the fabulous Bruce Pennington (middle), and in the US by Pinnacle Books (right, cover artist unknown). It contains 23 stories, a nice mix of pre-1910 fiction (nine stories by Ambrose Bierce, Edgar Allan Poe, Mary Shelley, Nathaniel Hawthorne, F. Marion Crawford and others) and pulp horror stories published between 1938-1965 (14 stories by Robert Bloch, Harry Harrison, Ray Bradbury, Theodore Sturgeon, Fredric Brown, H. P. Lovecraft and August Derleth, Henry Kuttner, Isaac Asimov, and others). 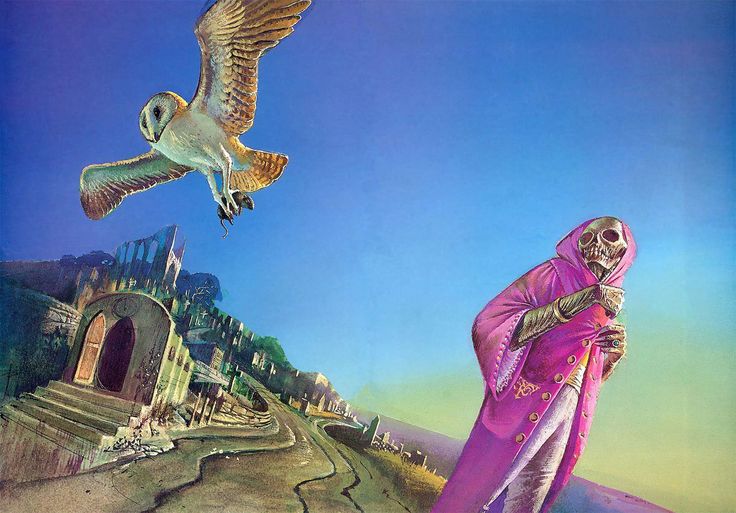 And here’s the back cover of the Pinnacle edition (click for bigger version). 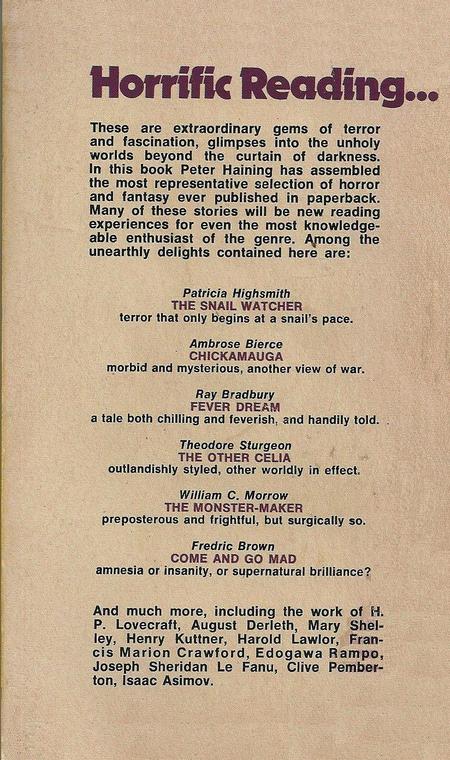 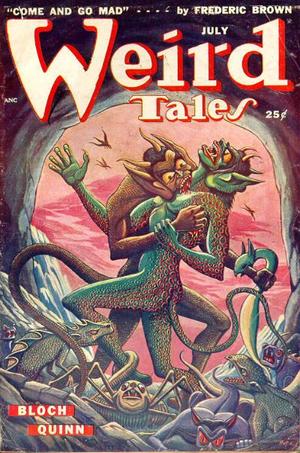 The pulp stories were chiefly taken from Weird Tales, but there are also contributions from Galaxy, Fantastic, Alfred Hitchcock’s Mystery Magazine, F&SF, and Science Fantasy.

Vampire
The Final Adventures of Sherlock Holmes, by Bob Byrne

Beyond the Curtain of Dark was published by Pinnacle Books in November 1972. It is 380 pages, priced at $1.25 in paperback. The cover artist is unknown. It had been out of print since 1972, and there is no digital edition.

Love that first cover! So, 1966 in the U.K., it was this Universal-Pictures version that was immediately recognizable as the iconic Frankenstein’s Monster.

It’s interesting to note that there was a time when portraying the monster like that without Universal’s permission was a legal infringement, because the studio copyrighted the make-up. The Monster looks so different in, say, Hammer film versions because those filmmakers didn’t want to be sued.

Which gets me wondering when the general legal opinion shifted and whether it was ever reasoned out explicitly somewhere: Yes, that design is owned by Universal, but the design was so wildly successful that today everyone, when they think “Frankenstein’s Monster,” pictures that. Universal does not own the iconic character itself; their version of his appearance has been subsumed into and become part and parcel of the character; ergo, that visual portrayal of the character is now good as public domain.

I used to own that 1966 edition but got rid of it in a house move/clear out / wild lapse of reason. Whilst the Frankenstein image is iconic, the snails on the cover relate to the Patricia Highsmith story – The Snail Watcher. This has to be the most memorable story in the book, dealing in snail sex and death by snail. Plucking snails off plants will never be the same again, once you have read that story. For this reason, I fell that neither of the other 2 covers begin to approach Kirby’s. Neil

> It’s interesting to note that there was a time when portraying the monster like that without Universal’s permission was a legal
> infringement, because the studio copyrighted the make-up.

Fascinating stuff! I had no idea Universal copyrighted the make-up, and hence the iconic look of Frankenstein. Where did you learn that?

> Whilst the Frankenstein image is iconic, the snails on the cover relate to the Patricia Highsmith story – The Snail
> Watcher. This has to be the most memorable story in the book, dealing in snail sex and death by snail.

Thanks for the mini-review, Neil!

John: “Where did you learn that?”

From reading way too many non-fiction books on the history and sociology of horror. Probably the best one is The Monster Show: A Cultural History of Horror by David J. Skal.

Okay, I just checked out The Monster Show: A Cultural History of Horror on Amazon, and it looks terrific. Into my cart it goes!