One of the many things I love about the Call of Cthulhu RPG — besides the prospect of gathering with close friends to cheerfully go insane together — is the rich array of settings. The core game is set in 1930s America, where Lovecraft (who died in 1937) set virtually all of his fiction, and that serves the pulp horror aesthetic nicely. But over the years Chaosium, and other publishers, have produced several top-notch supplements giving players the option to adventure in a wide range of times and places.

These include Cthulhu Now (1987), Terror Australis (1987), King of Chicago (1992), The Cairo Guidebook (1995), Atomic-Age Cthulhu (2013), and many, many more. The Dreamlands, Victorian London, Scotland, even the Orient Express… no other game invites you to go stark, raving mad in such finely detailed surroundings.

However, CoC has been sorely lacking a weird western sourcebook, so I was very pleased to see Kevin Ross and his friends at Chaosium release Down Darker Trails, a massive full-color 256-page hardcover which lovingly brings Mythos horror to the old west. The book is an excellent addition to Chaosium’s catalog, and contains a splendid historical re-telling of the American Territories, plenty of famous individuals, two complete towns, four western-themed Lost Worlds (including the weird subterranean world of K’n-yan, and the eerie Shadow Desert), and two complete introductory adventures.

Down Darker Trails invites you to play American Indian heroes and famous gunslingers, visit famous sites, and discover just how deeply the terror and mystery of the Great Old Ones has seeped into the West.

Down Darker Trails was designed for use with Call of Cthulhu and Pulp Cthulhu. Here’s the description.

Saddle up! Get yourself a posse together and have a look-see what’s over that hill. There’s strange rumors coming in from the whisperin’ desert. You’d best put a round in that iron and make haste!

Down Darker Trails is a new setting for Call of Cthulhu — the American West of the late 19th century. The era of gold rushes, outlaws and lawmen, discovery and expansion.

Rub shoulders with the likes of Wild Bill Hickok, Crazy Horse, and Calamity Jane, while journeying through towns like Deadwood and Dodge City — names and places that have transcended history to become legend. Down these dark trails the taint of the Cthulhu Mythos stirs, ready to lure the unwary and tempt the power hungry with whispered secrets of cosmic knowledge. This is a West of hidden worlds, lost treasures and cities, dubious deals and unsavory alliances. A land filled with beauty, mystery, terror and wild adventure!

Here you will find the means to create Old West investigators, new occupations, new pulp talents, and new skills. Captured in text and image is the history of the Old West, famous individuals, playing American Indian heroes, notable places and sites, as well as inspiration and guidance on bringing the terrors and mysteries of the Great Old Ones into your games.

Two complete towns, the gold-hungry Pawheaton and San Rafael on the Texas border, are fully detailed, providing Keepers with ready-made inhabitants and locales from which to stage campaigns. Four different Lost Worlds are discussed, from the weird subterranean world of K’n-yan to the eerie Shadow Desert.

Packed with advice on creating campaigns and adventures, including two complete introductory-level adventures:

Down Darker Trails is a setting supplement with scenarios useable with Call of Cthulhu and Pulp Cthulhu.

And here’s a few snaps of the interiors. 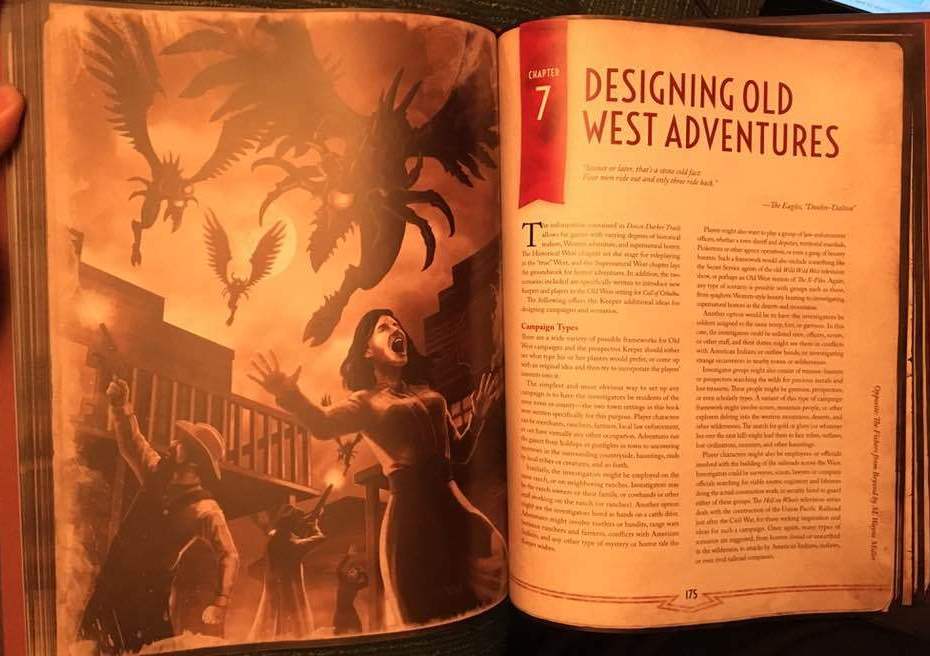 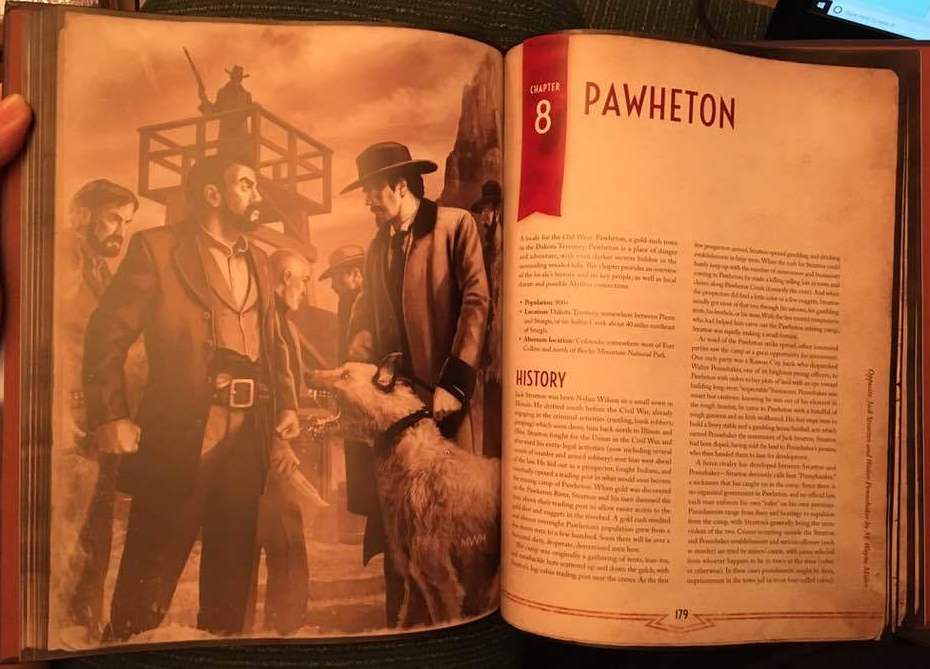 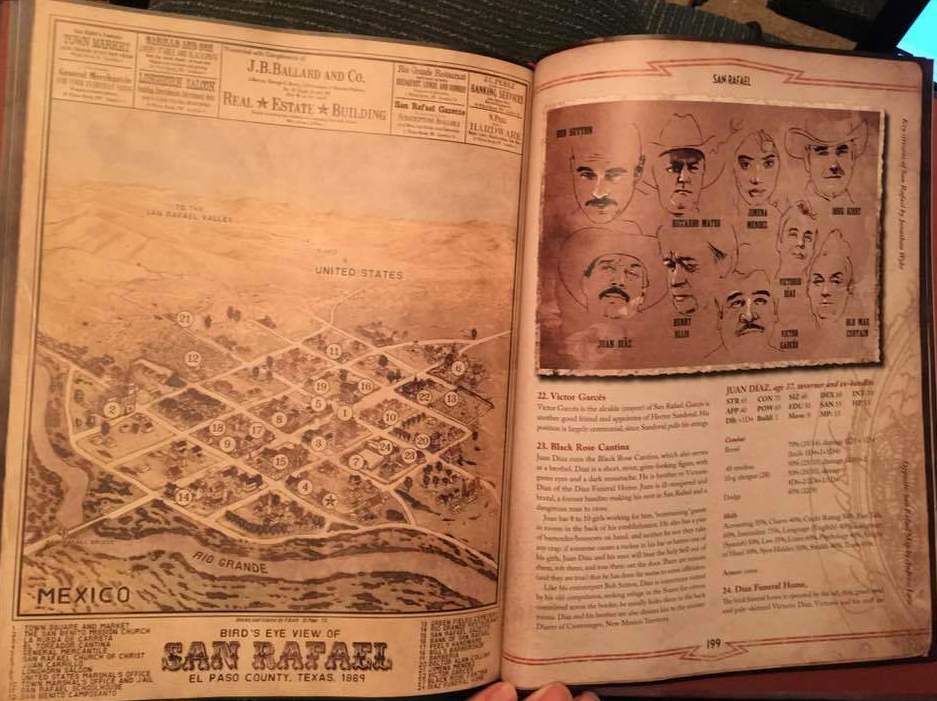 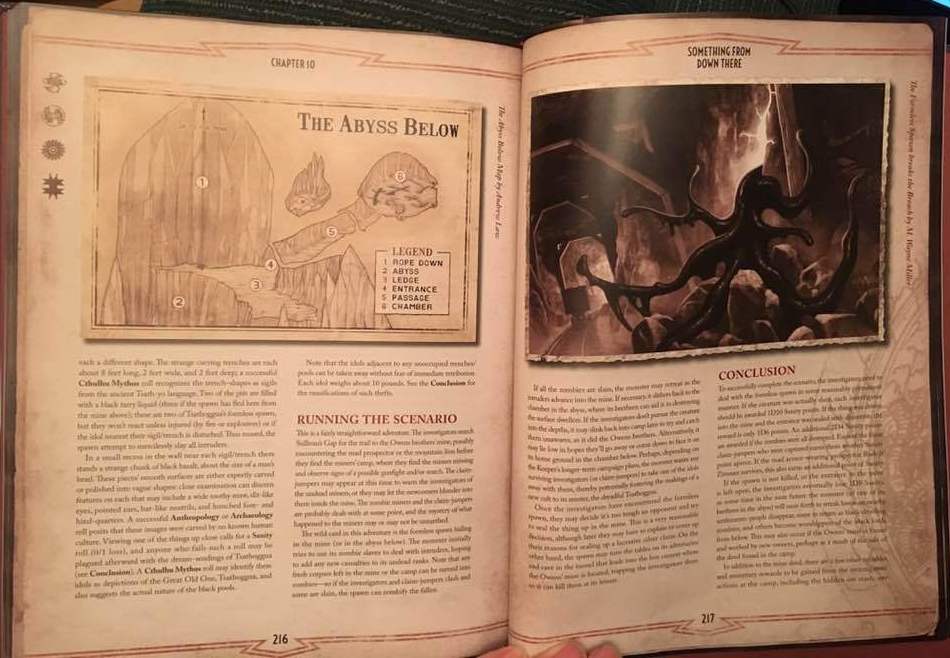 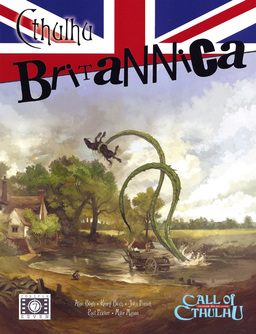 Our latest coverage of Call of Cthulhu (and its sister game Trail of Cthulhu from Pelgrane Press) includes:

Down Darker Trails was published by Chaosium on November 15, 2017. It was written by Kevin Ross and an enthusiastic team of gamers. It is 256 pages, priced at $44.95 in hardcover and $22.95 for the PDF. Purchase the PDF version right from the Chaosium website, and get more details here.

I like the idea of Cthulhu-Wild West, as I already knew ‘Deadlands’ from way back.

Cthulhu Now made too many people go nuke-and-shoot (hack and slash reinvented) unto a topic, which was actually all about cosmic horrors NOT being simply shot dead and done with… 😉

Funny you say that — DOWN DARKER TRAILS definitely has a DEADLANDS vibe, although it’s very much its own beast.

DEADLANDS is still the high water mark for Western horror, in my mind. I wish the Tor line of novels had performed better — they certainly seemed to put money and effort behind the three they put out.

Does anyone besides old school RPG nuts remember DEADLANDS?