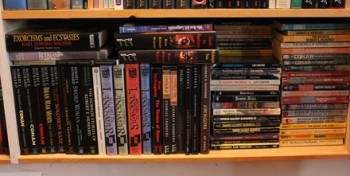 About twenty years ago, I bought John Clute and John Grant’s The Encylopedia of Fantasy. I wasn’t reading much standard fantasy at the time, having abandoned it for science fiction and crime stories. As I pored over the Encyclopedia’s entries, several authors I’d never read caught my attention, enough so that I went out and bought books by them. That was I how I came to read Guy Gavriel Kay’s Fionavar Tapestry and Tad Williams’ Memory, Sorrow, and Thorn trilogy. While I liked parts of them, they struck me as long-winded and overwrought for much of their length. I also realized I was done with stories of willowy elfs, doughty dwarfs, and emo heroes — the seemingly standard players in most of what I was reading. If that was the current state of fantasy, I was all right without it.

I was drawn back to the genre a few years later, though, when I became aware of Night Shade Books publishing hardcover omnibuses of Karl Edward Wagner’s Kane stories and novels. As a monster fan of Wagner, I jumped at the chance to replace my battered paperbacks. As soon as I got them I found myself compelled to read them. I hadn’t read Wagner’s fantasy in several years, and had almost forgotten how visceral a punch it packs (click for my reviews of Death Angel’s Shadow and Night Winds). His stories grabbed me and shook me in a way none of the writers like Kay or Williams had. Battle scenes in epic novels seemed bloated in the light of Wagner’s taut action sequences. The Kane stories were both darker and more vivid than most of the epics I had read. And whatever else about the character of Kane, he never mopes or whines, as I found too many modern epic heroes prone to doing.

When I finished rereading all the Kane stories, I practically ran to my shelves looking for anything else that might affect me the same way. The obvious choices were Robert E. Howard and Michael Moorcock. I had read both authors’ works several times previously, but not for nearly twenty years in both cases.

Howard met my needs, Moorcock less so. Howard remained the ur-swords & sorcery writer, a teller of ripping yarns of the first caliber. This time around Moorcock struck me as too intent on holding the material at a distance, as if part of him was slumming, or maybe just putting on a show to make some shopworn points about heroism, politics, and religion.

That’s when I ran out of books I already owned, so I dove back into Clute and Grant’s Encylopedia and began hunting up other titles and authors I’d never tried before. Within a year I’d bought all of Jakes’ Brak the Barbarian, Carter’s Thongor, and his Flashing Swords anthologies. Over the next couple of years I found all of Offutt’s Swords Against Darkness collections and De Camp’s trio of S&S anthologies from the sixties.

It was when I discovered Jason Waltz’s anthology Return of the Sword that I saw there was a wealth of new swords & sorcery being written. Soon after I discovered Black Gate (woo hoo!) and a bunch of blogs dedicated to the stuff. I was so taken with this renaissance of S&S that I wanted to be a part of it. That led to the creation of my own S&S blog, which ultimately led me to writing here at the mighty Black Gate. Perhaps the renaissance has cooled a little bit, displaced by the current taste for grimdark and epic series, but there’s still tons of pulse-pounding heroic storytelling going on. I’m glad to be able to do my part promoting the best of it, new and old alike.

This long recollection was spurred by something my wife, the luminous Mrs. V., asked me the other day: “Why swords & sorcery?” My immediate thought was, “Because it’s cool!” She explained that what she meant was why, having read so much other fantasy and science fiction over the years, did I come to focus so intently on S&S? As someone who hasn’t read any of it beyond the excerpts in my reviews (which she edits with both a scalpel and chainsaw, as needed), it strikes her as a somewhat restricted genre.

In light of her further questioning I forced myself to think more deeply. Why, indeed do I love these stories of tough, dangerous adventurers doing tough, dangerous things? After some reflection, I realized it’s because they ARE cool.

Several years ago I wrote:

I read fantasy — and swords & sorcery in particular — because it’s fun. Like most middle-class Americans I lead a very safe life, which I’m very happy about, but from which I sometimes like to take a break. Occasionally I need to hear the whoosh of a sword just missing Conan’s head, to peer down into the dark alleys of Tai-tastigon from the rooftops of strange gods’ temples, to smell the fires of Granbretan’s vile sorceries. Sometimes I need to get out of my content, comfortable place and journey to places unknown and fantastic. 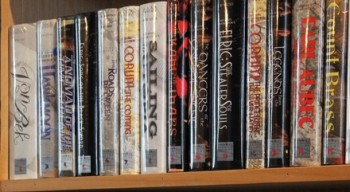 That’s a good part of why I read S&S (it’s also part of the same basic reason I read crime, horror, and science fiction stories.) Often, this attitude is condemed as escapism. All I can say to that is, so what? There’s some basic component of our makeup, call it collective unconsciousness or monkey brain, that responds to the call to adventure and action. It’s the reason some people jump willingly out of airplanes or scale sheer cliff faces. Personally, I don’t quite have the nerve to do those things (or risk life and limb), so I, like so many others, am willing to settle for a story.

What makes it cool to me are protagonists unbound by the things that hem in and tether most of us. They don’t pull back from danger or flee their enemies. Instead they fight, as Artos and Medrawt in Henry Treece’s The Great Captains:

Then, almost by his ear, Medrawt shuddered at the sound of the war-horn. Its high-pitched howling rose like the scream of a soul in the torment of eternal damnation. It went on and on until Medrawt was at the point of crying out for it to stop. He began to tremble in every limb now and could hardly breathe with the great surging of blood in his throat. He tore at the bronze ring about his neck. For a moment his eyes clouded and he was blind.

Then, as though he did not know himself any longer, he turned to Artos and smiled at him, drawing back his lips as far as he could. His hands had gone dry. His legs were firm again.

He was the master of his voice. ‘By God, Bear,’ he heard himself say, ‘they shall know what it is to outface Rome now!’

Then he raised his right hand in a high and commanding gesture. The Cymry felt godhead move in their veins at that moment. Then the whole line of horse began to move forward relentlessly down the dark hill.

Even when doomed, they fight, as Bear Killer does in John Fultz’s Tall Eagle:

“Help me, Rides the Wind! Sharp Tongue! Help me!” Bear Killer yelled at us from the top of the quivering mass. A cloud left the face of the moon, and I saw clearly now. A great mound of snow-white flesh rose before us. Like a vast centipede it crawled on dozens of segmented, pointed legs depending from its slug-like body. It was longer than eight horses standing nose-to-flank in a row. A great stinking worm. It had crawled into our camp and grabbed Bear Killer in its mouth. It raised its eyeless, featureless head toward the stars as it drew him deeper into its maw.

What makes it cool is the action and excitment. Sometimes it’s in bloody battle, like this scene from P.C. Hodgell’s Dark of the Moon:

A screaming wave of Wastelanders had charged in among the leveled spears and hit the shield-wall.

They swarmed up over it. The first across died on the defenders’ swords, entangling them, and the next wave crashed down alive on the far side. Harn swept the Prince behind him. His own shield was only a buckler strapped to his forearm, but it served to turn aside the Wasters’ weapons of stone and bone while his own axe cleared a bloody arc before him.

Or when the hero, like Rafael Ordoñez ‘s Keftu, faces a prehistoric monster in Dragonfly:

There was a distant boom, and the water swelled a little higher. The black gate swung open, groaning on its hinges. A shadow swam out, circled once, and returned to the darkness. The cries of the helots had fear mixed with their bloodlust now. The fish came out a second time. It swam the perimeter of the tank without seeing me. It had a huge, bullet-shaped head, plated with bone like a living skull with eyes, and a jagged, razor-sharp jaw. It was large enough to swallow me in one gulp. 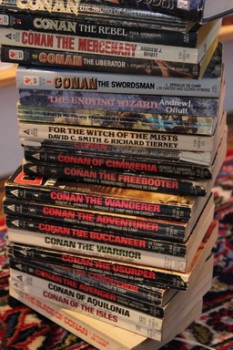 What makes it cool are the strange, mysterious realms it’s set in, like Keith Taylor’s vision of primeval England in Bard:

The wilderness of oak, ash and thorn men called the Forest of Andred stretched all around him. He’d seen nothing else for three score days. This forest had existed as it now was before the Saxons had entered Britain…or Caesar’s legions had pressed ashore against Kentish resistance…or even the first iron-using Celts had set foot in the island. Long, long before. Those events covered a mere thousand years. Some individual trees had witnessed them all from seedlings. The forest itself was far older.

Or a landscape made of the corpse of a dead god in Darrell Schweitzer’s Echoes of the Goddess:

Far below on the forest floor, the decaying body of a giant stretched for miles upon endless miles, half submerged in a swamp of coagulated blood. The trees were growing out of it, the entire forest like a fungus growth on this thing which in any sane universe could never, never have been alive. Curves of flesh rose like islands. The skin had collapsed between some of the ribs, leaving gaping chasms large enough to swallow cities.

All these excerpts are why I read swords & sorcery. I want the action and danger; the adventure and mystery. These are things I will never do in real life, but reading about them triggers something in my psyche. I can be a traveler of both time and space and fight alongside the men marching with their shields and their swords. Sometimes I don’t want to ponder a scientific puzzle or think about the true nature of realistically conceived feudal economics. Sometimes I just want to stand with Druss the Axe on the walls of Dros Delnoch or skulk alongside Satampra Zeiros in search of a matchless treasure.

I don’t read swords & sorcery to obscure reality, but to take a breather from it. I don’t get chances to play the dashing hero or the intrepid explorer, but reading these stories gives me a little taste of what it could be like.