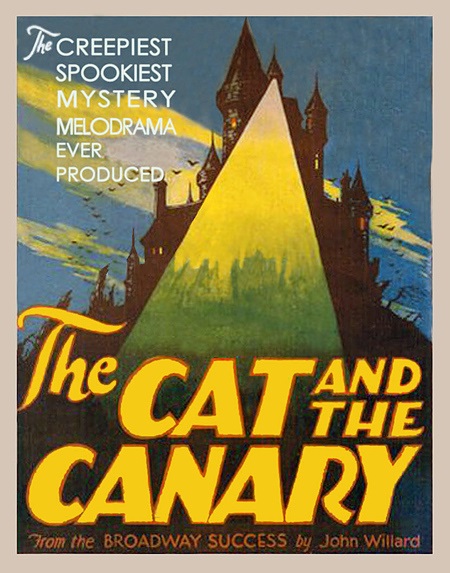 Growing up, I never quite understood the appeal of Bob Hope. At the time, he was an oldish guy who told mostly unfunny jokes, usually while holding a golf club. I wasn’t familiar with his many film roles of yore and I’m still not familiar with a lot of them.

But he comes off better in old dark house movies such as The Ghost Breakers (1940) and The Cat and the Canary (1939). His wisecracking, scaredy-cat persona in these films was considerably more appealing than his golf club wielding standup persona of later years. 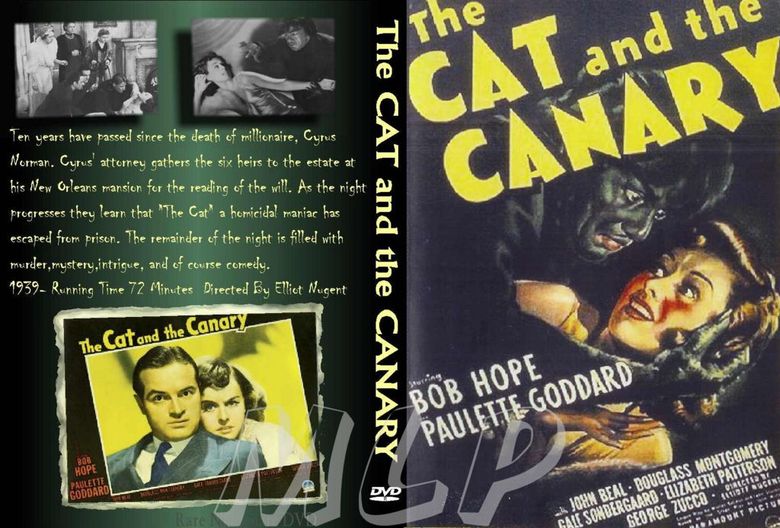 The Cat and the Canary is pretty much everything you’d expect from an old dark house movie — and not much more. That’s not really the putdown that it sounds like, since the 1922 play by John Willard was one of the works that was instrumental in laying out the template for the old dark house movie.

By the time of the 1939 movie version there had already been two other filmed adaptations of the play, one of which has apparently been lost. Since 1939 there have been two more adaptations. 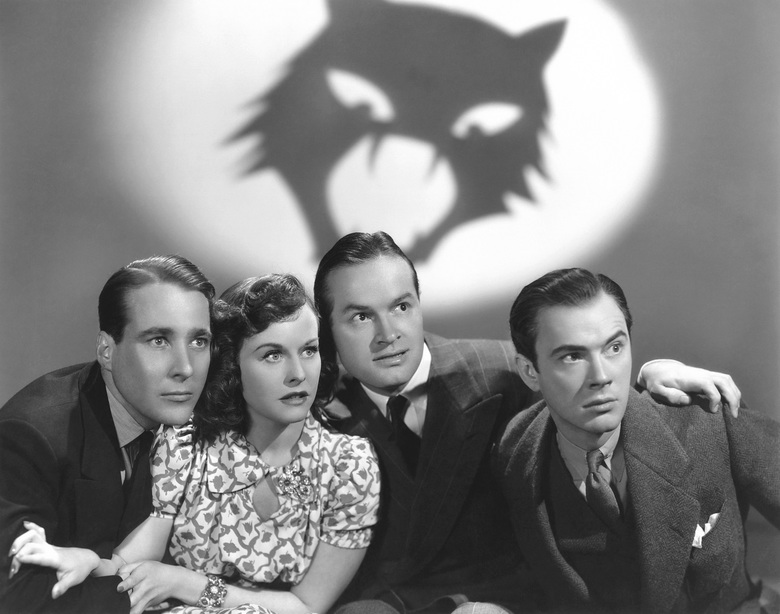 In any event, there is an old dark house and it can only be accessed by boat , through the swamps of Louisiana. Which is a nice touch, as are the creepy stage sets constructed to recreate all of this. Though it was made by Paramount and later acquired by Universal, the movie feels like it fits in quite nicely with the other Universal horrors of this era.

The plot — stop me if you’ve heard this one before — a gang of hopefuls gather for the reading of the will of an old rich relative. The twist is that it’s ten years after his demise, presumably so the old bird could aggravate his greedy relatives from beyond the grave. 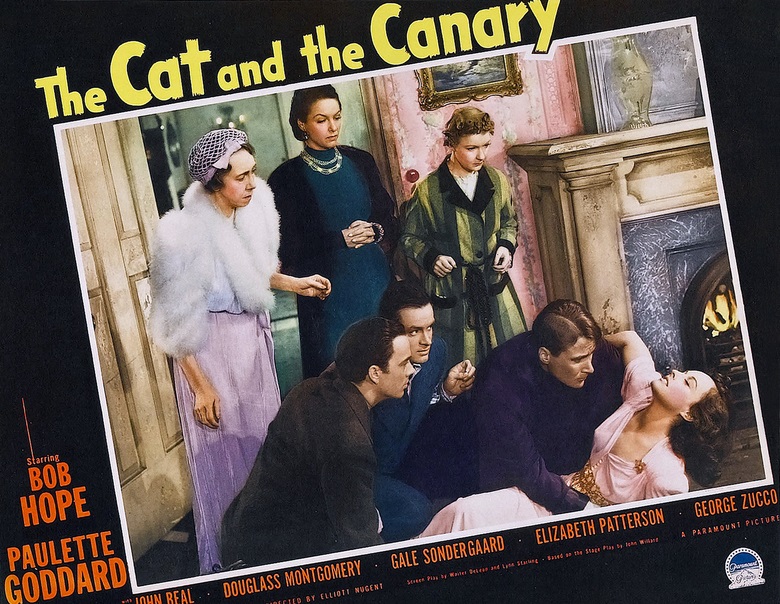 Said plot thickens, as they so often do, and there are various acts of skullduggery and mayhem and there’s an escaped lunatic on the loose and on and on it goes until its finally all sorted out and our hero and heroine (Hope and Paulette Goddard) ride off into the sunset — or on this case, row off into the murk of the swamps.

The old dark house movie was well established by this time, so much so that the New York Times review remarked, “mystery melodramas laid in old dark houses are mostly nonsense anyway.” Which didn’t stop Times reviewer Frank Nugent from giving the film a thumbs up. 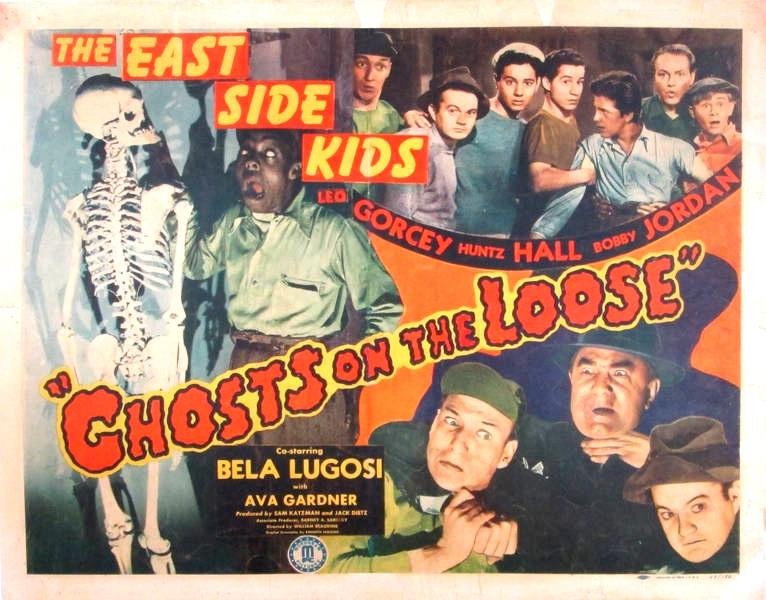 For whatever reason, I was never exposed to The East Side Kids or the ensemble they later morphed into, The Bowery Boys. Based on my viewing of Ghosts on the Loose, which stars the former, I’d say that I didn’t miss much. But maybe they were just having an off day. It’s not like I’m opposed to lowbrow humor, after all, having spent a good deal of my younger years watching Three Stooges shorts. 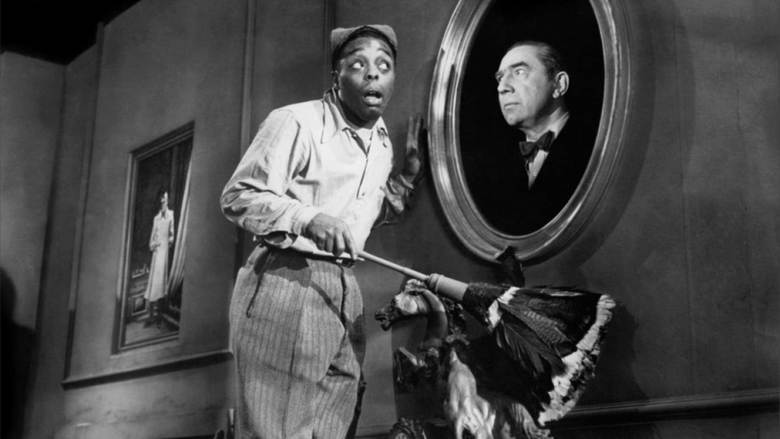 Ghosts on the Loose didn’t do it for me for a few reasons. First and foremost, I didn’t think it was funny. This doesn’t have to be a drawback, unless the makers of a movie intend for it to be funny — and I think they did. Then there’s the old dark house content — or lack thereof. Again, this is not necessarily a problem, unless the maker of the film intended to make an old dark house flick. With a title like Ghosts on the Loose it’s safe to assume they did.

Much (much, much too much, I say) of the first half of the movie is given over to the Kids’ preparations to attend a friend’s wedding — the bride is Ava Gardner, one of the big names here. Turns out that the newlyweds have bought a house that’s next door to a “haunted” house. Hijinks ensue. Or at least one wishes they would. While there’s a lot going on on the screen there’s not really much happening, if that makes any sense. Turns out the hauntings, what few there, are a just a front for a gang of German spies, led by none other than the other big name on this marquee, Bela Lugosi. 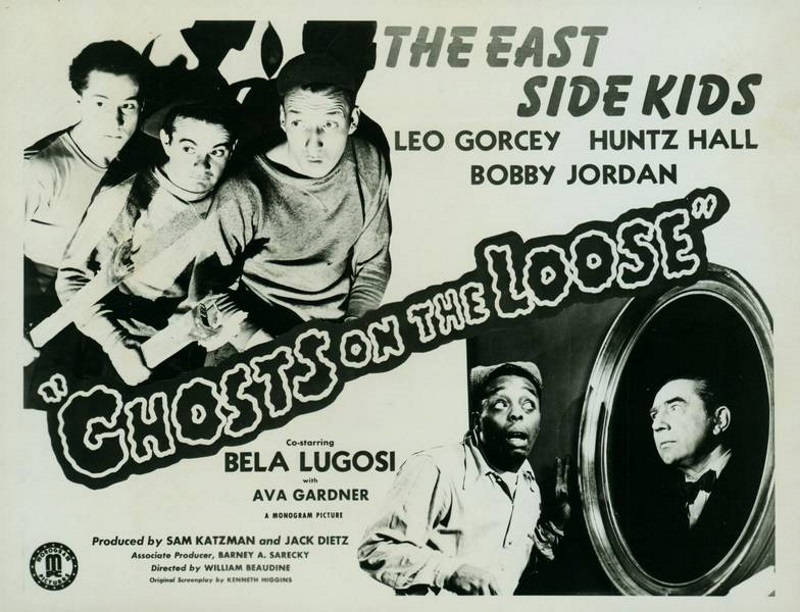 My summary? Move along, move along. Nothing to see here. But I’ve got a few Bowery Boys old dark house flicks queued up and so I’ll give them another chance. Stay tuned.

William I. Lengeman III digs into the TV vaults at Forgotten TV. His last article for us was Star Trek Movie Rewatch: Star Trek V – The Final Frontier (1989).

I wonder: at some point in this series, are you going to review the grandaddy of “old dark house” flicks, James Whales’ The Old Dark House?

If I was more organized I suppose I’d have done that already, perhaps even as my first entry. There’s also the 1963 remake, which should make for a good double feature.

Alice and I watched The Cat and the Canary last night, on your recommendation.

It was delightful! Bob Hope is hilariously cowardly, especially in comparison to Fred and Charlie, the other two men also vying for the hand of the beautiful Joyce (Paulette Goddard). But he’s so sincere in his affection for her, and she responds so warmly to his (usually pathetic) attempts to be brave for her, that I was totally won over by the romance between them.

Goddard really carries the movie, I thought. Joyce is a remarkably brave woman, meeting awful dangers with surprising pluck and resourcefulness. And Goddard is a vision. I wasn’t familiar with her before this film, but I definitely want to explore her career more.

In fact, I’ll see if I can convince Alice to watch their next film together, 1940’s Ghost Breakers, this weekend.

I’m glad to hear that you liked The Cat and the Canary. I’ve seen Ghost Breakers before but I’ll pencil it in for another look as part of an upcoming double feature.